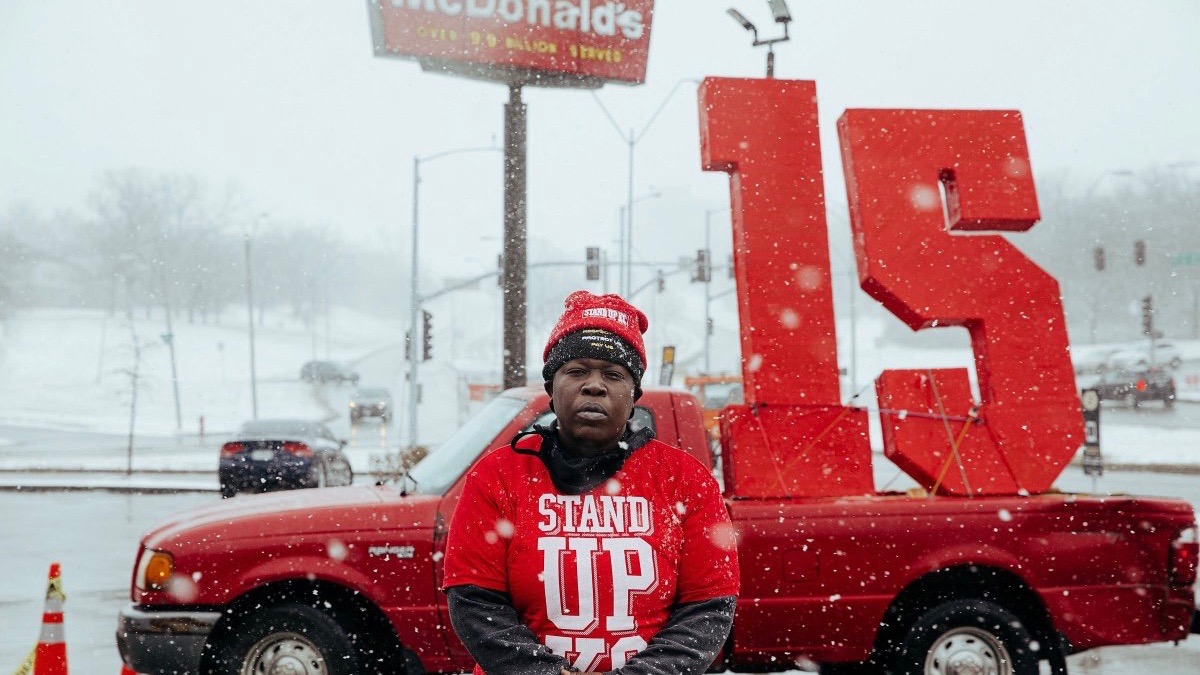 Fast food and home care workers led a nationwide strike of thousands across the United State, demanding updating the minimum wage rates to USD 15 per hour. Photo: Stand Up KC/Twitter

Workers in major cities across the United States, participated in a nationwide strike action to raise the federal minimum wage to USD 15 per hour, on Tuesday, February 16. The strike action comes at a time when the Joe Biden administration is trying to push through a budget bill which includes the much-touted USD 1.9 trillion pandemic relief plan and the 15 dollar minimum wage hike.

The strike was primarily led by workers employed in fast food chains, like McDonald’s, Wendy’s, and Burger King, who pay anywhere between USD 7-9 per hour as wages for an eight-hour work day. Fast food workers were joined by other frontline workers like nurses and home care workers, and received solidarity from workers of other sectors as well.

Most major cities like Chicago, New York City, Charleston, Miami, Houston and San Jose, among other locations reported demonstrations and pickets by workers. Workers were also reported to be seen paying homage to the Black Lives Matter movement and the anti-racist struggle, especially since a vast majority of fast food and other low-income workers are also African-Americans and other people of color.

Here are some visuals of the demonstrations held in different parts of the country.

.@McDonalds, stop paying us poverty wages while you make billions of dollars every year.

.@fightfor15 1/3 While photographing Fight For 15 Chicago workers lining up for a car parade around McDonald's corporate HQ I noticed a construction worker making a gesture to me to take a photo from across the street… #FightFor15 #solidarity pic.twitter.com/AaZ3YqkfOz

Demonstrators lining up their cars in Chicago on their way to picket McDonald’s corporate headquarters. Photo: Joseph Brusky/Twitter

BREAKING: Essential NYC fast food workers rally in front of the Wall Street Charging Bull statue in solidarity with strikers across the country demanding $15 and a union nationwide! #RespectProtectPayUs pic.twitter.com/4ou5aQ88Lb

Fast food workers in New York City hold a demonstration in front of the Wall Street’s iconic charging bull in support of the national strike. Photo: Serving Up Justice/Twitter

Proud to stand with @seiufl to keep up #FightFor15 in Central Florida! Floridians voted for $15 min wage. We need to respect it. We also support $15 fed min wage in #AmericanRescuePlan & oppose Fla Bill #SJR854, which takes away rights of many workers to make $15 min wage! pic.twitter.com/rWvIcVZZJ9

$15 IS #CovidRelief! Poverty wages have no place in a “recovery.” A stimulus check will help, but it will disappear. A $15 minimum wage is a permanent stimulus that will help my family survive, & it will boost the economy!
—Bridget Hughes
McDonald’s KCMO#FightFor15 #RaiseTheWage pic.twitter.com/OZVrUydiAH

Democratic Party legislators are planning to push the relief plan through a “budget reconciliation” vote, which would bypass the 60-vote requirement for a general budget plan and can be passed through a simple majority of 51 that the Democrats have. Even though several of president Biden’s party colleagues and legislators have been pushing for the wage hike, the president himself has not displayed enough confidence to pass the budget through a reconciliation vote.

The campaign Fight for $15 has been organizing low-income workers, since its inception in 2012, in a struggle to hike minimum wage levels in the US. The last time that the federal minimum wage was hiked was in 2009, and has remained unchanged at USD 7.25 per hour. Most states have updated their minimum wage laws to either bring them up to the federal level or higher.

The campaign has had several significant victories in cities like New York City and Los Angeles that have brought minimum wages up to or above USD 15. Meanwhile, states like California and New Jersey have passed laws to introduce the 15 dollar wage in a phased manner over the next few years. But no state has a general rate of USD 15 in effect, despite nearly a decade of protests and strikes.

A 2021 Congressional Budget Office report found that while there could be long-term potential job losses, at its most conservative estimates close to a million people could be lifted out of poverty with a wage hike and lead to an increase in incomes of over 27 million workers.

The Economic Policy Institute, in its report released last month, found more favorable predictions of raising the minimum wage, estimating a wage hike for nearly 32 million (21% of US workforce) workers. It also estimated that over 59% of the workers with family incomes below the poverty line, would also receive a significant raise in their incomes.

Mapping Faultlines: NATO is fighting Russia to the last Ukrainian