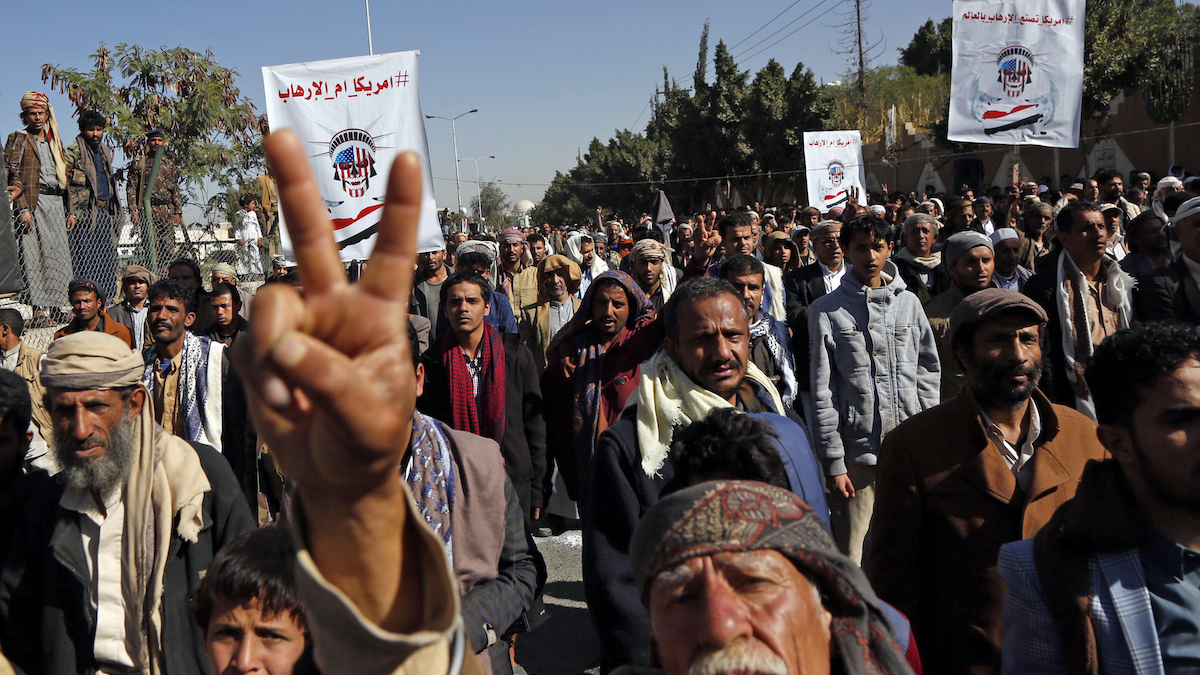 Supporters of Yemen's Houthi movement stage a demonstration in front of the closed US Embassy in the capital Sanaa on 18 January 2021 Photo : Mohammed Hamoud / Anadolu Agency

A official of the the Yemeni group Ansarallah (commonly known as the Houthis) condemned the US sanctions on two of its officers. Al-Masirah on Wednesday, March 3, reported Mohammad Abdulsalam, head of the National Delegation, as saying that the US was not in the  “process of stopping the aggression and lifting the siege on Yemen. It is ordering the prolongation of the war and the exacerbation of the humanitarian crisis.”

The United States on Tuesday imposed sanctions against two military commanders of Houthis accusing them of “procuring weapons and prolonging the conflict by perpetrating attacks against civilians and neighboring countries to advance the Iranian regime’s destabilizing agenda.”

Both Saudi Arabia and the United States blame the Houthis for the recent attacks on land targets in Saudi Arabia and its shipping vessels sailing in the Red Sea. They also accuse the Houthis of being proxies of Iran. Iran has always refuted these claims calling it an attempt to cover up war crimes in Yemen.

The two Houthi military officials sanctioned by the US Treasury Department are Mansur al-Saadi, the Houthi naval forces chief of staff, and Ahmad Ali Ahsan al-Hamzi, commander of the Yemeni air force and air defense forces. The two commanders will be subject to a freezing of their official assets and will be barred from doing business with US citizens.

The US announcement came days after it reduced its financial commitments at a donor conference to address the humanitarian crisis in the country. The US has promised to donate around USD 191 million this year, which is USD 35 million less than what it promised last year. The donor conference managed to raise only USD 1.7 billion as opposed to the USD 3.85 billion which was the target.

The Biden administration has reversed some of the more aggressive policies of its predecessor against the Houthis, including removing the terrorist tag that the Trump administration had branded it with. It also suspended military support to the Saudi-led coalition’s military intervention in Yemen, which according to human rights groups as well as the United Nations, is responsible for the deaths and displacement of tens of thousands of civilians. The US also recently suspended pending review an arms deals with the United Arab Emirates, a member of the Saudi-led military coalition.

However, in spite of the Saudi-led military coalition being responsible for scores of human rights violations and crimes against humanity in Yemen, the US has yet to impose any sanctions on them.