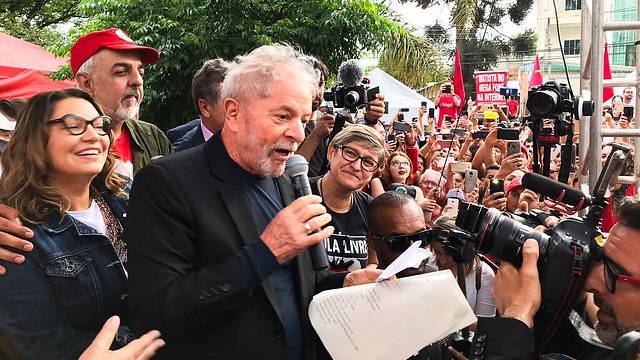 Brazilian ex-president Luiz Inácio Lula da Silva delivered a speech to supporters immediately after he was released from prison after being incarcerated for 580 day. Photo: José Eduardo Bernardes/Brasil de Fato

On Monday March 8, Minister Edson Fachin of the Supreme Federal Court, annulled all of the legal sentences made in the Operation Car Wash case in Curitiba, Parana against ex-president Luiz Inácio Lula da Silva. With the decision, the former president is once again eligible to be a political candidate.

Judge Fachin declared the incompetence of the Federal Justice of Parana in the cases of the Guarujá “triplex”, the Atibaia property, and of the Lula Institute. The ruling comes amid denouncements that members of the Operation Car Wash task force and of the judge overseeing the case, Sergio Moro, were partial. The decision means that the legal processes will be analyzed once again, but by the Federal Justice of the Federal District which will have the authority to say whether the sentences in the three processes will be ratified or not.

This weekend, investigation carried out by the Research and Consulting intelligence showed that the potential votes for Lula in the presidential elections in 2022 tally 12 points higher than those for the current president Jair Bolsonaro.

In a press statement, lawyers Lula Cristiano Zanin and Valeska Martins affirmed that the decision of Fachin “affirmed the incompetence of the Federal Justice of Curitiba.”

“It is the recognition of what we have always been correct about in this long legal battle, in which we never had to change our foundation to show the nullity of the processes, the innocence of ex-president Lula and the lawfare that was being exercised against him,” the text highlights.

The lawyers affirm that the nullification of the processes “is in harmony” with the argument sustained by the defense of the ex-president “for more than 5 years driving the process,” but they highlight that the decision of Fachin “does not have a special power to repair the immediate damage caused by former judge Sergio Moro and by the prosecutors of ‘Car Wash’ to ex-president Lula, to the Justice System and to the Democratic Rule of Law.”

“During this long trajectory, in spite of all of the proof of innocence that we presented, ex-president Lula was unjustly put in jail, he had his political rights unjustly taken away and his assets blocked,” highlighted the lawyers.

“We always showed that all of this conduct was part of a collusion between the then-judge Sergio Moro and the members of the ‘task force’ of Curitiba, as it was reaffirmed by the material that we had access to and with authorization of the Supreme Federal Court,” the lawyers stated.