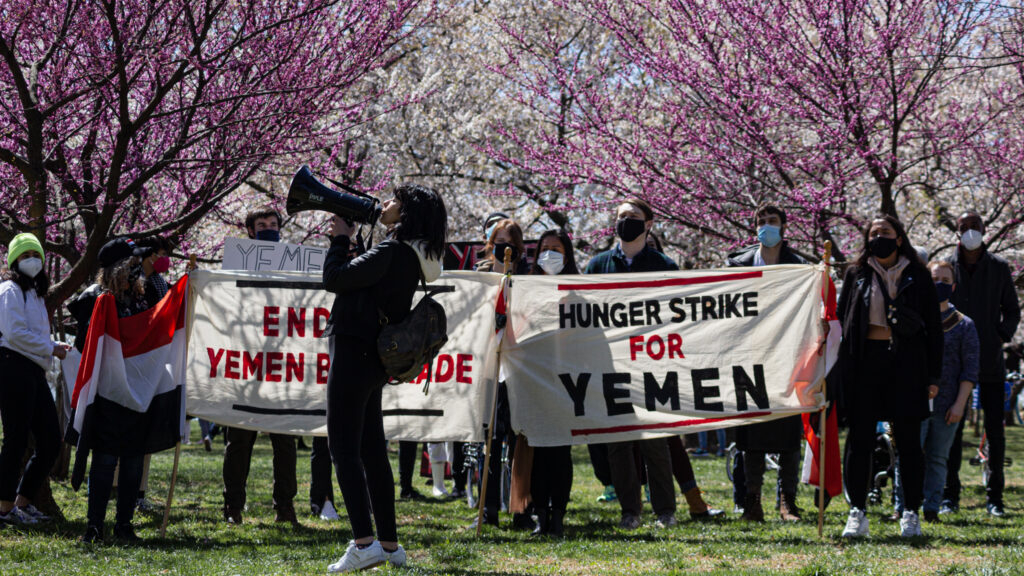 A demonstration in support of the Yemeni American hunger strikers held at the National Mall, near the Lincoln Memorial in Washington DC, on April 3. Photo: Arab American News

Wednesday, April 7, marks 10 days since the beginning of a hunger strike by Yemeni American activists in the United States. The six activists began their strike on March 29 in protest against the continued military and diplomatic support that the US has given to Saudi Arabia in its war on Yemen. The demonstration is being held at the iconic Lincoln Memorial in the national capital, Washington DC.

The activists, part of the Yemeni Liberation Movement, have been demanding the withdrawal of the US from the Saudi-led blockade of Yemen, which along with the war, has compounded one of the biggest humanitarian crises in the world. The Yemeni Liberation Movement is an organization based out of the state of Michigan, consisting of Yemeni-origin US citizens and Yemeni nationals, working towards building an international campaign against the Saudi invasion.

Along with the hunger strike, the campaign also intends to file petitions to the US Congress and president Joe Biden demanding an end to the blockade, and also called for a National Day of Fasting on  Thursday, in solidarity with the hunger strikers and the Yemeni people. The Yemeni Liberation Movement has also received support from other movements, including Just Foreign Policy, Yemen Relief and Reconstruction Foundation, Friends Committee of National Legislation and Yemeni Alliance Committee.

The blockade of the Saudi-led coalition, supported by the US, which began in 2015 is estimated by a recent UN report to have caused over 16 million people, including 2 million children, to suffer from malnutrition due to acute food shortage. Of these, at least 400,000 children are predicted to face death by starvation this year, if they do not receive treatment immediately.

The protesters feel their demands are not being addressed by the current administration. “We felt that our voices weren’t being heard (by) doing protests and writing letters,” said Monica Isaac, one of the hunger strikers, as reported by Arab American News. “It was important for us to take a radical step forward to really get this out to the media and to the people and to (get) our demands met.”

“We have shouted, marched, asked for peace…as non-violent protest goes, a hunger strike wreaks the most havoc (on) the body and mind,” said another hunger striker, Iman Saleh, to a demonstration at the Lincoln Memorial on April 3. “We are willing to undergo these risks in solidarity with the (millions of people in) Yemen who are being starved. We are no longer asking when Yemen will see peace, we are here to demand it.”

The situation has been deemed by the United Nations Humanitarian Coordinator, David Gressly, to be “hurtling towards the worst famine the world has seen in decades.” Even though the Biden administration, which came to power in January this year, had removed the Ansar Allah — commonly known as the Houthis — from its list of terror groups, it still continues to be ambiguous on the matter of continuing logistical and diplomatic support to the blockade.

Instead, the US looks the other way on the continued Saudi airstrikes on Yemen and recently even extended unilateral sanctions on the Ansar Allah leadership.

Meanwhile, similar campaigns, protests and petitions continue in the US and elsewhere, to hold it accountable for its actions in Yemen. Earlier this year, two Yemeni families approached the Inter-American Commission on Human Rights against US drone strikes between 2013 and 2018 that killed 48 people. Later, another petition was filed by two Yemeni nationals suing Germany for a 2012 US drone operation that killed members of their family and was undertaken from a base in Germany.