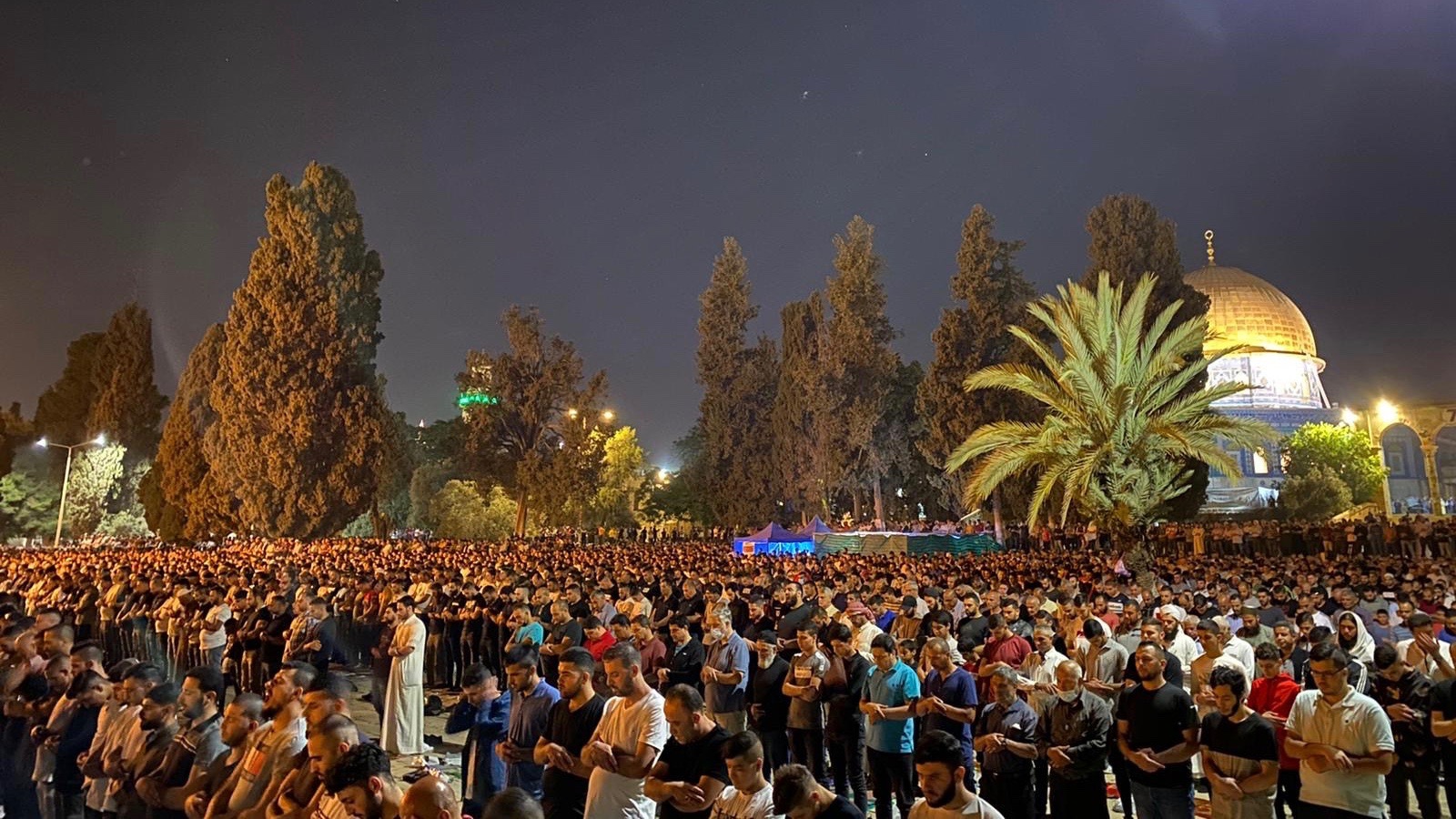 Tens of thousands gathered at al-Aqsa mosque on May 8 despite repression from Israeli forces. Photo: IMEU

Palestinians have once again shown that they refuse to suffer the occupation and colonization of their land in silence. The Sheikh Jarrah locality in the occupied East Jerusalem has recently become the focal point of this steadfast resistance. On Friday May 7, worshipers had gathered in al-Aqsa mosque and turned it into a solidarity meeting with the families that have been handed eviction notices in the Sheikh Jarrah neighborhoods. The mosque was then stormed by Israeli security forces who attacked worshipers. 205 were injured and 88 were hospitalized and several dozen have been arrested, but this repression has only further ignited resistance.

The following day, undeterred by attempts to impede their transit to al-Aqsa mosque for Leilat Al Qadr, the holiest night of Ramadan, thousands walked by foot to Jerusalem from the West Bank and gathered outside al-Aqsa in huge numbers.

Palestinians, stopped by Israeli forces while traveling to Al Aqsa mosque for Leilat Al Qadr—the holiest night of Ramadan—get off their buses and walk the long trek to the mosque by foot. This is the resilience, determination, and dedication of Palestinians. pic.twitter.com/7vqTlsy9W7

Thousands of Palestinians in 48 made their way to Jerusalem, were initially stopped by Israeli police so many of them decided to walk. Others forced the roads open خاوة pic.twitter.com/ba1TNF1vrv

The storming of the mosque and subsequent mobilizations came after a successful movement to revoke restrictions imposed on a gathering near the Damascus gate by the Israeli state. This latest round of protests have revived the hopes of the Palestinian resistance movement.

Sheikh Jarrah like so many other Palestinian villages and neighborhoods in the occupied territories is facing Israeli state machinery which wants to replace it with yet another illegal Jewish settlement. Just like in other cases Israel is trying to make it a law-and-order issue. However, Palestinians have exposed the hollowness of such claims and establish the fact that it is yet another attempt to ethnically cleanse the Palestinians from their homeland.

What is Sheikh Jarrah?

There are roughly 3,000 Palestinians living in the neighborhood of Sheikh Jarrah. The neighborhood believed to be named after the doctor of Saladin who captured Jerusalem from the crusaders in the 12th century, is located a small distance away from the old city and was part of the East Jerusalem captured by Israel in the 1967 war.

Most of the Palestinian families settled in Sheikh Jarrah are part of more than 750,000 refugees who were forced to leave their homes in the historic Palestine in order to avoid violence by Israeli terrorist groups during the Nakba in 1948. These families were eventually settled in the neighborhood in 1956.

In the 1960s, Jordan, which was controlling the territory at the time, signed a deal with the United National Relief and Work Agency (UNRWA) and agreed to transfer the land deeds in the name of the families and built permanent houses for them in return for them renouncing their refugee status. But, before the formalities were completed Jordan lost the control over the territory and Israel illegally annexed it. Israel carries out these evictions of Palestinians despite its own parliament passing a decree in 1968 accepting the refugees’ settlement with the United Nation Relief and Work Agency (UNRWA).

On May 2, Israeli district court ruled that six Palestinian families had to vacate their homes before May 6 and gave till August 1 to seven other families to do the same. Before this ruling, several other families had already been displaced from the locality of Sheikh Jarrah by court orders despite the fact that Israeli courts have no jurisdiction in the occupied territories. Many have pointed out that Israeli courts have shown willingness to ignore crucial pieces of evidence against the Jewish claims.

The history of litigation against Palestinian families started in 1972 when some extremist Jewish right-wing groups filed a case claiming that the land belonged to some Sephardic Jews during the Ottoman rule. Based on fabricated records and publicly claimed forgeries Israeli courts have ordered eviction of several Palestinians in the past. At least 42 Palestinians were evicted in 2002 and a couple of other families in 2008 and 2017 despite public outrage.

As per international law, as an occupying force, Israel cannot do anything to alter the status quo in the occupied territories. According to the same set of laws no Israeli court has a jurisdiction in such territories. Despite these well-known facts, Israeli courts have not only admitted litigations regarding land deeds, they have also aided in Israeli acts of building illegal settlements in and around East Jerusalem.

Israeli courts know that their jurisdiction in occupied territories is non-existent. Perhaps that is why on May 2 judgement along with the eviction order it made the provision of a “compromise” between Palestinian families facing eviction and settlers claiming the land. It is no surprise that Palestinian families, living at Sheikh Jarrah for generations, refused any compromise with the settlers. This refusal is a sign of renewed strength of the resistance movement in Palestine.

Israel has carried out several evictions of Palestinians from the other parts of the city as well. Palestinian neighborhoods of Silwan have regularly seen destruction of their houses by Israeli forces on the false pretexts such as the lack of a permit. In November last year, while the pandemic raged on, Israel evicted 87 Palestinians from Silwan’s Batan al-Hawa area. Israeli authorities often refuse or delay building permits to Palestinians in order to force them to leave the city. All of these are part of Israel’s policy of maintaining a “demographic balance” in the city.

Resistance to these evictions in East Jerusalem had not been able to gather the widespread support necessary to stop them, and as a result Jerusalem has moved closer to becoming a Jewish majority city. Israel has built scores of illegal settlements in this area where around 200,000 illegal Jewish settlers live under heavy military protection. Israel has also tried to restrict the movement of Palestinians in the city to gradually claim all public spaces including the religious structures, such as Al-Aqsa.

Once again, Palestinians have had enough. They are not only now trying to engage in a legal battle with documents from Jordan and Ottoman archives for Sheikh Jarrah residents, but they have also started to mobilize local and international protests exposing Israeli claims of it being a law and order issue. Last month at least 191 human rights groups wrote to the International Criminal Court (ICC) to request that the eviction at Sheikh Jarrah be included in its ongoing investigation of war crimes in the occupied territories.

The persistence of protesters against restrictions on their gathering after Ramadan prayers near Damascus gate made them successful despite widespread violence and vilification in Israeli and some international media. Sheikh Jarrah is yet another litmus test of their resolve. They are mobilizing international support and local protests amidst the settler and state violence and amidst the pandemic.