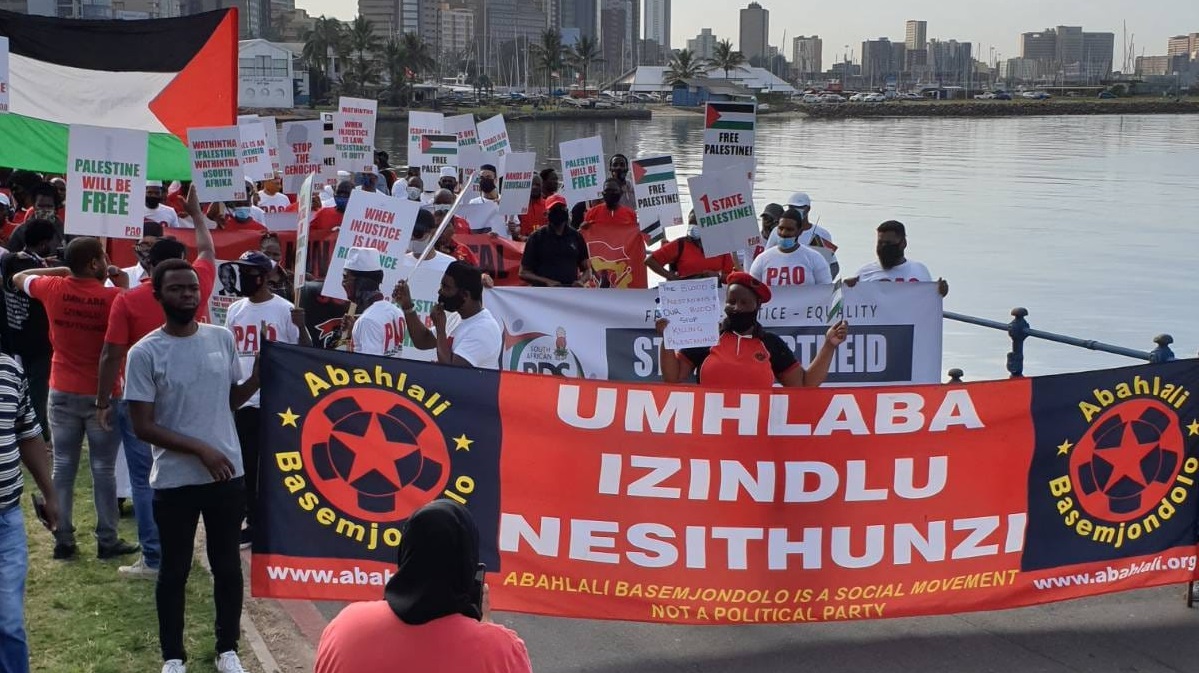 Members of Abahlali baseMjondolo, SAFTU, COSATU and other organizations stage a rally in solidarity with Palestinians on May 21. Photo: SA BDS Coalition

In solidarity with the Palestinian cause and to protest the Israeli bombing of Gaza, dockworkers at the Durban port in South Africa continue their refusal to unload cargo from an Israeli ship which docked on Thursday, May 20. The workers are organized under the South African Transport and Allied Workers Union (SATAWU).

The union members remain on guard against any attempt by their employer to break this labor action by bringing in other workers to service the Israeli ship, Zim Shanghai. The ship is owned by Zim Lines, an Israeli state-owned shipping company ranked as the 10th largest in the world.

The boycott of the ship is not a one-time protest but the beginning of a series of labor actions aimed at ensuring that no Israeli ships can receive any service at South African ports, SATAWU’s maritime national sector coordinator Thulani Dlamini told Peoples Dispatch.

Arguing that Israel is a habitual violator of ceasefires, Dlamini said that the boycott of Israeli ships will continue until a “lasting solution” that respects the internationally recognized rights of Palestinians is reached. SATAWU intends to pressurize the South African government into issuing “an order to all port authorities to prohibit Israeli ships from docking in South African harbors” until then.

“Total liberation of Palestinian people,” Dlamini says, “or Israeli ships will find it increasingly difficult to dock at our ports.” Not only Israeli ships but all ships carrying cargo to or from Israel will be targeted, he further said, adding that the union is enlisting professional help in track the complex network global cargo movement to be able to identify that ship. “Israel must know it will lose access to the South African market if it continues the occupation.”

The South African government has officially condemned Israeli aggression and, along with the African Union (AU), reiterated its solidarity the Palestinian cause. In his weekly column, president Cyril Ramaphosa said that “there will be never be peace” until the resolution of “the root causes of a conflict.. in this case the illegal occupation by Israel of Palestinian land.”

Condemning Israel’s “total disregard for successive United Nations Security Council (UNSC) resolutions that call for an end to the occupation of Palestinian land,” Ramaphosa went on to compare the suffering of the Palestinians with that of the Black people in South Africa under the apartheid regime.

However, Dlamini argues that mere condemnation in words does not suffice and it is high time that a price is imposed on the Israeli occupation and its atrocities by the international community, particularly by South Africa, given its own history.

The boycott by dockworkers

After the decision to take action, SATAWU leaders announced in a circular on May 18, “It has been brought to our attention that a shipment from apartheid-Israel will be landing on South African shores- Durban Port. As a school of class struggle, located in the transport industry, SATAWU calls upon its members to stage rolling boycotts against these shipping companies and take part in lunchtime pickets, to show solidarity for the subjugated.”

Israel’s policy of “land dispossession, invasion of holy sites, restriction of the mobility of goods and people” in occupied Palestine is “reminiscent of how Europe underdeveloped the African continent in general, and South Africa in particular,” the circular added. “Consequently, the actions of apartheid-Israel must be met with equal resistance and condemnation that was part and parcel of the anti-apartheid movement.”

In accordance with the labor laws, the union had notified the employer about the strike in advance in order to protect the workers from disciplinary action. According to Dlamini, armed with this information, Transnet, the state-owned company that manages ports in South Africa, fast-tracked the COVID-19 safety procedures that had to be conducted on the ship and hence, made it ready for unloading earlier than anticipated. The dock workers were unaware of this and began unloading the ship before realizing it was the Zim Shanghai, following which they stopped the work, Dlamini said. He also expressed concern over the risk of COVID-19 spreading due to the fast-tracking of the process. Peoples Dispatch has reached out to Transnet for a response.

The following day, Friday, members from other unions which are also affiliated to the Congress of South African Trade Unions (COSATU),the largest trade union federation in the country, joined the picket.

COSATU is a long-time ally of the ruling African National Congress (ANC). However, it has been critical of the government’s handling of the economic fallout of the pandemic which has disproportionately burdened the working class.

Also mobilizing its members for the picket on May 21 were unions affiliated to the left-wing South African Federation of Trade Unions (SAFTU), the second-largest trade union federation, which includes the country’s single largest union – the National Union of Metalworkers of South Africa (NUMSA).

In 2013, NUMSA had separated from the COSATU after withdrawing support to the ANC. It blamed the ANC’s neoliberal economic policies for perpetuating high levels of inequality – among the worst in the world – a legacy left behind by the apartheid regime overthrown in the 1990s.

“In the South African trade union movement, we have disagreements over a number of issues, but on the question of occupation of Palestine, there is a total unity,” Dlamini said. “The last time trade unions in South Africa got together as a united force, we brought down the apartheid regime. Now we are getting to together again to end Israel’s apartheid rule over occupied Palestine.”