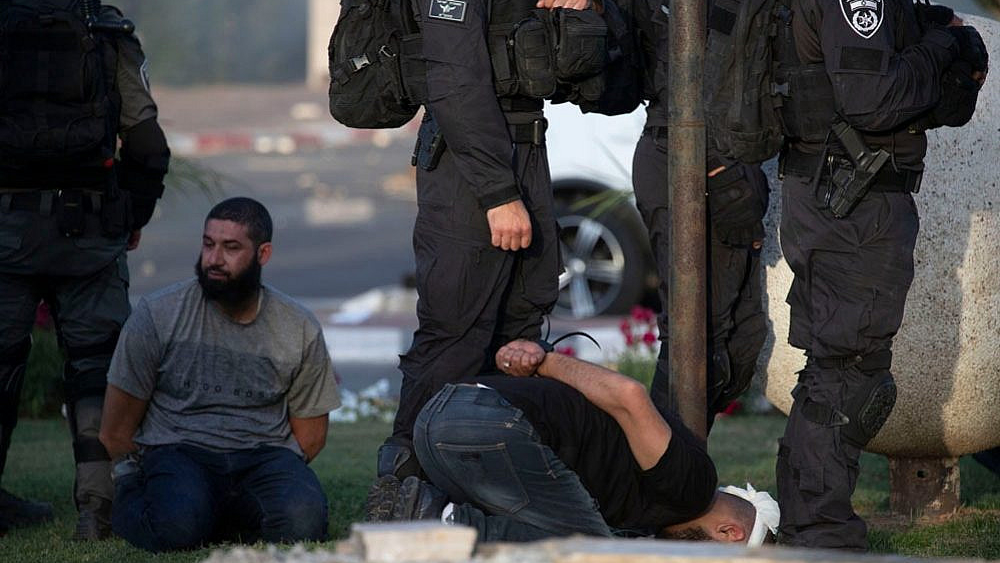 The state of Israel launched a campaign of mass arrests in response to the mass participation of Palestinians living inside Israel in protests against its oppression in the occupied territories. The campaign called “operation law and order,” has little to do with law or order. It is a campaign to instill fear among the Palestinians who came out in the streets in opposition to Israeli aggression, especially the recent offensive on Gaza and attacks on Al-Aqsa. The mass arrest campaign is yet another example of the apartheid nature of the Zionist state where minorities are treated like second class citizens.

Launched on May 24, three days after the announcement of ceasefire agreement which ended the 11-day Israeli offensive in Gaza, the campaign had a clear target of arresting 500 Palestinians. The objective, as per the statement issued by the Israeli police on May 23, was “restoration of deterrence” and “increased governance in designated places” which was supposedly broken by recent protests inside Israel. This was over and above the 1,550 people who had already been arrested.

Between May 10, when the Al-Aqsa compound was stormed for the second time and May 20, when the ceasefire was announced in Gaza, major protests took place within Israel (the regions of Palestine taken over following the 1948 war). Palestinian citizens of Israel marched across towns and cities shouting slogans against Israeli aggression and the bombardment of Gaza, and demanding an end to the occupation.

The protests by these Palestinians who raised slogans in support of the residents of Sheikh Jarrah and Gaza put the Zionist state on the backfoot. In cities such as Lod (Lydd), Haifa, Acre and others, protesters were attacked by the Jewish right-wing, often alongside Israeli security forces. Many of these were later termed as “riots by Arabs” by the local Israeli media.

Most of the arrests and indictments carried out so far by the Israeli police have named only Palestinians. According to Israeli human rights group Adalah, only nine percent of the total indictments filed so far are against Jewish settlers.

The Israeli state took every possible measure to violently suppress the protests by imposing emergency laws even while allowing settlers to attack the protesters wherever they could. Illegal Jewish settlers from the occupied West Bank traveled in large groups to Lod (Lydd) and tried to attack Palestinians a day after a settler was arrested for killing a protester. In similar incidents, Palestinians were attacked by Jewish settlers in cities like Bat Yam and Umm al-Fahm. In Umm al-Fahm, where the Israeli police shot dead a protester on May 12, two of his friends were charged with “ramming their cars” in a nearby town on May 31.

The campaign was to last a maximum of 48 hours and within the first hour of its announcement at least 74 Palestinians were arrested. Israeli security forces have already arrested at least 1,700 Palestinians and the campaign has entered its second week. On Monday, May 31, the Israeli security forces arrested at least six more Palestinian citizens of Israel from the northern Israeli town of Kafr Kanna and detained an unknown number of Palestinians from other northern Israeli towns of Arara and Ara.

According to the Arab Emergency Committee — a group formed after the current round of protests against Israeli atrocities in the occupied territories started early last month — since the beginning of the campaign, Israeli forces have also assaulted at least 300 Palestinians.

A Systematic persecution of Palestinian minorities

The campaign has been condemned by the rights groups both in Israel and outside calling it a blatant denial of the right to protest and continuation of Israel’s record of the violation of human rights of Palestinian minorities. The Palestinian leadership in Israel claims that this is the largest wave of political arrest in decades in Israel calling it a “campaign of intimidation and terror against Arab public.” Some organizations have written to countries and international agencies for investigation into the systematic persecution of Palestinians in Israel. In a surprise move the United Nation Human Rights Council (UNHRC) adopted a resolution on Friday, May 27, for an international inquiry into the violations of rights in the occupied territories in the last two months. The resolution also included the 1948 Israeli territories.

The Palestinians constitute around 21% of Israel’s total population of 9 million. They are mostly the descendants of Palestinians who survived Nakba and remained inside the 1948 Israeli borders. Most of them live in towns with mixed populations in the north. They have always been discriminated against by the Israeli state and denied equal rights in the country. The Israeli right-wing considers these Palestinian citizens as fifth columnists and wants them to deprive them of their citizenship rights. For example, though they have the right to vote and get elected to the Israeli parliament, they have never been allowed to be a part of any government in Israel and their right to vote has been used to polarise Israeli voters by leaders such as prime minister Benjamin Netanyahu.

The violence against the Palestinians inside Israel is nothing new. Israel has a long history of attacks on Palestinians — forcing them to leave their houses, taking their land, not allowing them to enroll in the Israeli military and so on. Extremist Jewish supremacist groups often take out provocative marches through the mixed areas in many cities often leading to violence. Referring to one such violent attack on by the Israeli security forces and settlers in April this year in Jaffa, Sami Abu Shehadeh, member of the Israeli Knesset from the Arab Joint List, had called Israeli oppression a “persistent attempt” to “judaize” and “displace” remaining Palestinians by the Israeli state.

It is no wonder that Palestinians inside 1948 Israel and in the occupied territories have started realizing their similar status. The recent united call for a national strike , a first in decades, could be the beginning of a united fight for liberation.