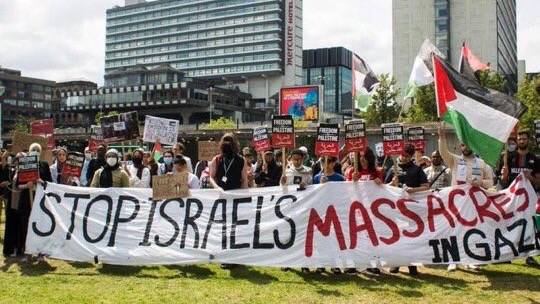 A demonstration in support of the Palestinian cause in Manchester, UK. (Photo: Sarah Wilkinson/Twitter)

More than 680 civil society groups and individuals wrote an open letter to US president Joe Biden asking him to act on his public statements on human rights and ensure accountability of the Israeli authorities and political leadership for their routine violations of Palestinians’ rights. The letter demanded that the Biden administration apply “concrete diplomatic pressure” on Israel to “end its ever expanding discrimination and systemic oppression” of Palestinians.

Signatories to the letter include well-known former diplomats, activists, scholars, doctors and religious leaders, such as Lakhdar Brahimi, Noam Chomsky, Rashid Khalidi and Ilan Pappé among others, and civil society groups like United for Peace and Justice from over 75 countries including the US, Israel and Palestine. The list of signatories also includes Israel’s former attorney general Michael Ben Yair and former speaker of the Israeli parliament Avraham Burg.

Though it does not use the words “apartheid” and “occupation”, the letter calls “for U.S. leadership to take action to help bring an end to Israel’s institutionalized domination and oppression of the Palestinian people and protect their fundamental human rights.”

Biden had recently stated, “I believe the Palestinians and Israelis equally deserve to live safely and securely, and enjoy equal measures of freedom, prosperity, and democracy.” Highlighting this, the letter claims that “for Palestinians, the space between these statements and their daily lives could not be wider.”

Noting that Israeli aggression and violence continues in the occupied territories, including East Jerusalem, the letter points to the attacks on Al-Aqsa compound and attempts to evict Palestinians from Sheikh Jarrah and other neighborhoods as evidence of “a separate and unequal governing system” for Palestinians.

The statement also mentions the recent attacks on Gaza, which have rendered thousands homeless, and Israel’s 14-year blockade of the territory. The signatories demand that “the United States must address the root causes of the violence which successive administrations have neglected.” They emphasize that the Biden “administration must apply concerted diplomatic pressure to help end the ever-expanding discrimination and systemic oppression and ensure accountability for Israeli authorities that violate Palestinian rights.”

Contrary to Biden’s claims after assuming presidency of following a human rights-centric foreign policy and protecting democracies, the US has refused to condemn the recent Israeli aggression in Gaza that lasted for 11 days and killed over 250 Palestinians. Instead, the Biden administration tried to protect Israel from global criticism by twice blocking a joint statement in the UN security council on the issue. US secretary of state Antony Blinken even justified the Israeli bombings, calling it Israel’s right to self defense.