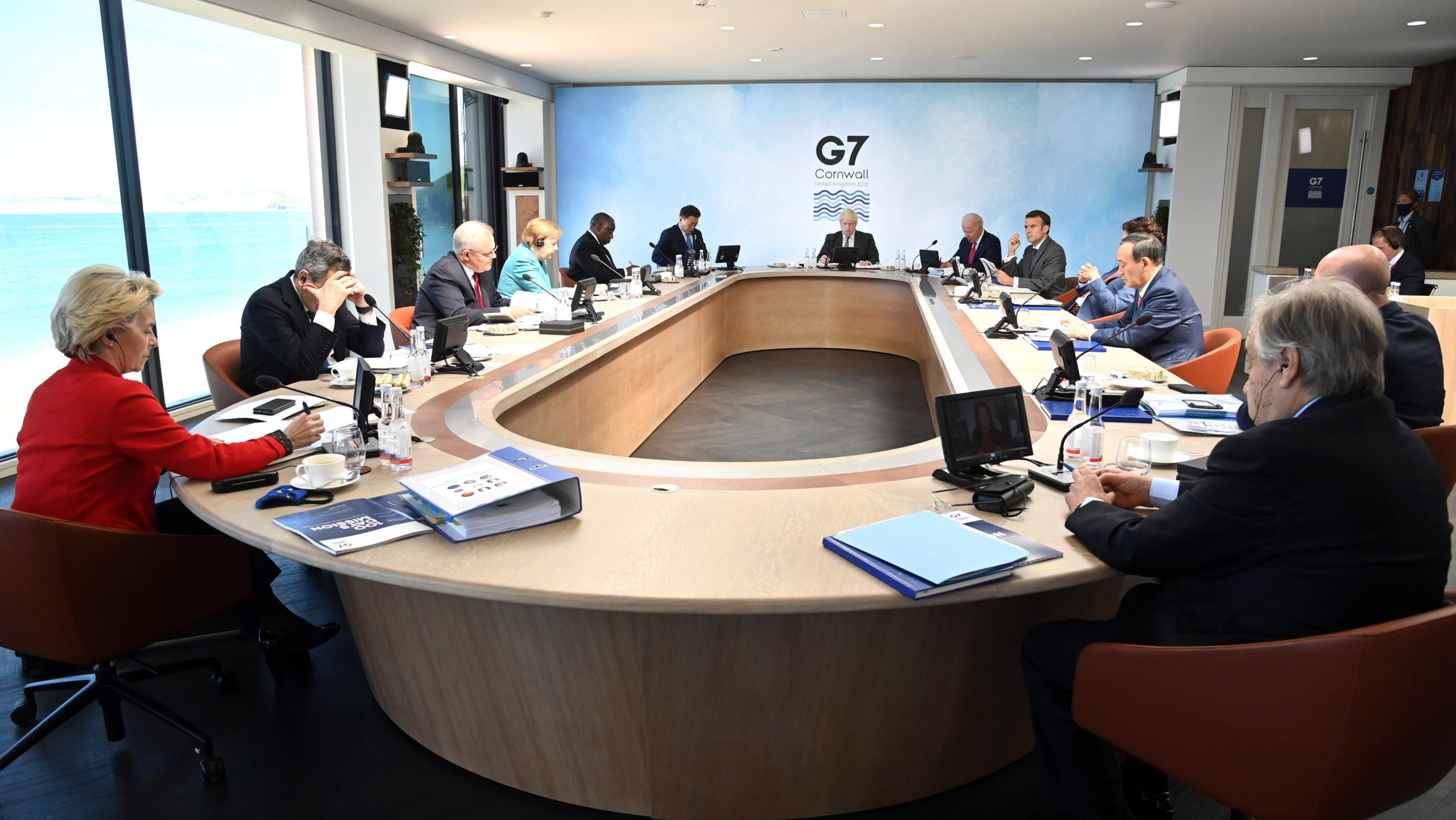 The G-7 meeting in Cornwall.

There were cautious hopes for the G7 meetings held in early June this year, where the leaders of Canada, France, Germany, Italy, Japan, the United Kingdom, and the United States – the world’s seven economically wealthiest countries – came together to discuss key global issues. A remnant of the neo-colonial nature of such forums, they represent a place where decisions with global impact are made.

The G7 produced two notable outputs that concern global health governance: the first being the Carbis Bay Health Declaration which commits to taking efforts to prevent a pandemic similar to COVID-19 occurring again in the future; and the second being a commitment to provide more than a billion vaccine doses for low and low-middle income countries over the next year.

The Carbis Bay Health Declaration pledges “to lead the way in building a resilient, integrated and inclusive global health system prepared and equipped to prevent the causes and escalation of disease, and to detect emerging health threats quickly.” The Declaration is split into four areas; prevent, detect, respond, and recover. Within each section, the seven countries have made commitments (in the loosest sense of the word) to “strengthen the global health and health security architecture.” However, there are no references to any tangible actions, leaving little hope that any steps will be taken based on the Declaration, and making it near impossible to hold the leaders to account on the commitments they have made.

For example, the Declaration recognizes the important role of the World Health Organization (WHO) and the importance of strengthening the institution. Specifically, the text refers to the call for better financial support for the WHO – yet it fails to state whether the G7 will actually increase their own contributions. By failing to do so, their words of support carry little weight.

The Declaration also makes reference to “the importance of open, diversified, secure and resilient supply chains.” It commits to supporting the trade in and export of vaccines and other healthcare products alongside partnering with the World Trade Organization (WTO) to frame longer term solutions to increase global access. An optimistic take on this messaging would interpret that the G7 recognizes the fact that trade and intellectual property poses severe barriers to access, and is ready to support efforts to increase local production and the waiving of patents, and sharing of technical know-how and data regarding vaccines and other medical products. Yet, a more realistic interpretation is that concerns around diversified supply chains simply speak to the ongoing contentions around issues of delivery of the AstraZeneca vaccine in Europe, with a clear omission of any actual reference to intellectual property.

Intellectual property has been recognized as a long-standing and well-established barrier to equitable access to medical technology long before the COVID-19 pandemic. It is the reason the WHO, together with Costa Rica, launched the COVID–19 Technology Access Pool (C-TAP) in May last year with the aim of scaling up production of COVID-19 health products by the pooling of patents, technical know-how and data. And it is why South Africa and India proposed suspending intellectual property restrictions around COVID-19 medical products at the WTO. Discussions around the proposal have been gaining international traction. Yet, despite the shock announcement of (limited) support by the US, it remains largely blocked by wealthier states. The lack of any mention of intellectual property in the Declaration sends out a clear message — these powerful states are still refusing to recognize the implications of intellectual property protection and the consequence of their (in)actions in today’s vaccine apartheid.

These seven states are well underway in vaccinating their entire populations with a growing narrative of ‘post-COVID’ life. This is in sharp contrast with the global vaccine apartheid caused by inequitable access to COVID-19 vaccines. While the G7’s pledge to provide over one billion doses to developing countries might sound impressive, it falls short of the 11 billion doses needed in order to vaccinate 70% of the world’s population. Additionally, this number takes into account doses and resources already committed to global vaccination efforts by the seven states. Further, 870 million of these doses are coming from surplus supplies which is due to countries purchasing enough doses to vaccinate their populations many times over.  Effectively, the commitment taken at Cornwall can be described as a pitiful act of charity with wealthy countries donating their vaccine cast-offs to give the impression that they are dedicated to global solidarity, while in fact they are protecting their historical positions of power and blocking efforts of any real change pushed for by the rest of the world.

While disappointing, the outcome of the G7 is hardly surprising. And while it may be tempting to liken such forums and Declarations as being full of hot air, they are arguably more damaging than that. They represent a reality in which self-appointed global leaders come together to reinforce their position in the world while the rest of the world is expected to be thankful for their efforts.

Natalie Rhodes works on issues around global health governance, access to medicines and health justice. She is active with the People’s Health Movement and has worked on the WHO Watch project alongside being a coordinating member of the UK circle.