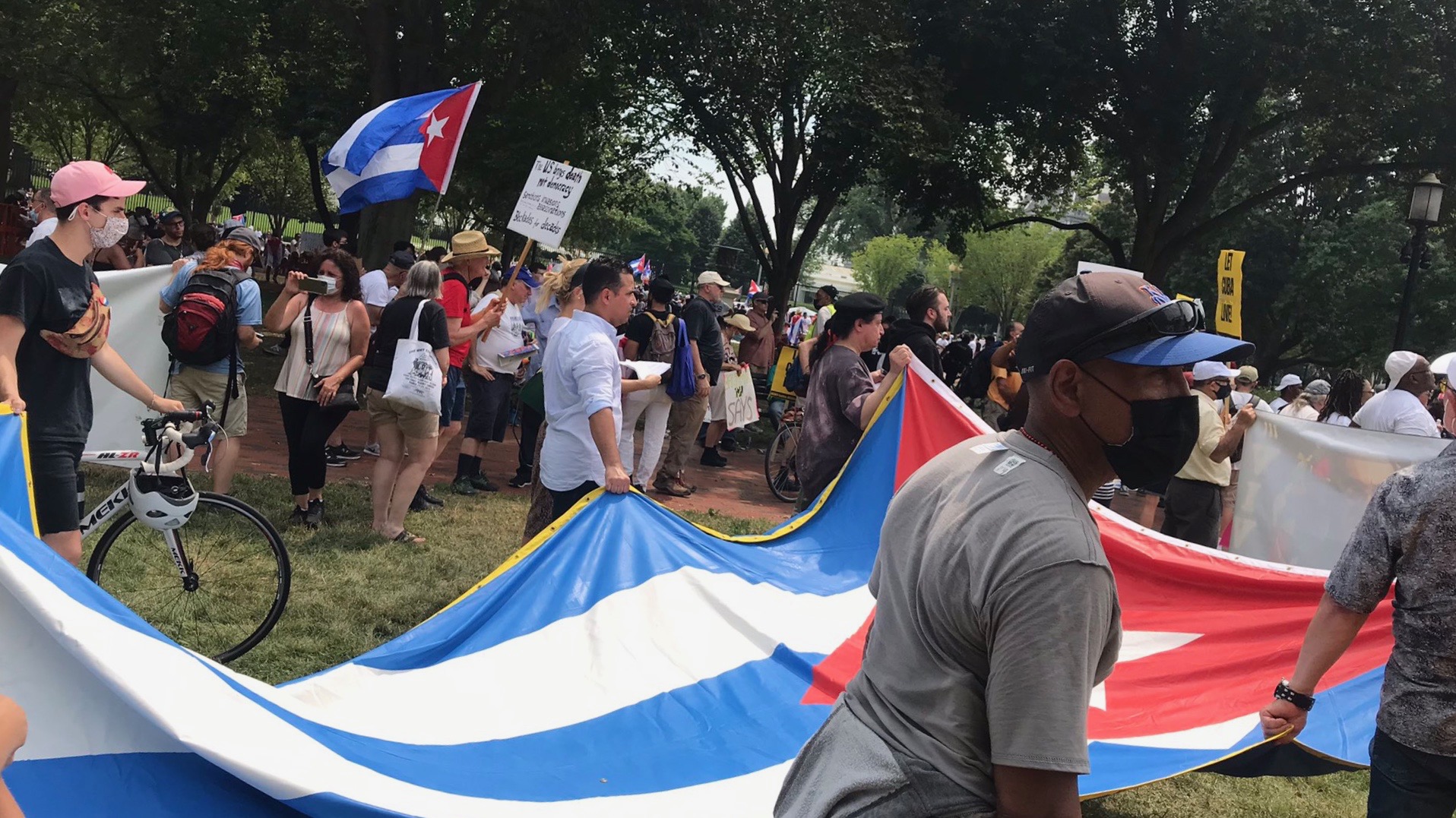 Protesters seen with Cuban flags and the 26th of July Movement flags at a massive demonstration in Washington DC. (Photo: ANSWER Coalition)

Protests were organized in cities across the United States against the continued sanctions by the US government on Cuba. On Sunday, July 25, responding to a call by the ANSWER (Act Now to Stop Wars and End Racism) Coalition, an anti-war group affiliated to the Party for Socialism and Liberation (PSL), hundreds of people participated in demonstrations in Washington DC, San Francisco, and other parts of the country, calling for the administration of president Joe Biden to end all sanctions imposed on Cuba.

In the national capital Washington DC, the iconic Lafayette Square Park near the US presidential office, White House, witnessed a large turnout. Demonstrators were seen waving the Cuban flag and the 26th of July Movement flags, with slogans and placards saying “Hands Off Cuba!”, “Let Cuba Live!”, “Cuba Si, Yankee No!” and “Unblock Cuba”.

“We are here today in solidarity with the Cuban people and Cuban families,” said Sean Blackmon, an organizer in the Stop Police Terror Project DC and the ANSWER Coalition, while addressing the crowd gathered at Lafayette Square Park. “For 62 years, the Cuban people have been suffering… because of the criminal, unilateral and illegal blockade that they have been attacked with by the US government,” he said.

Blackmon also called out the hypocrisy of the Biden administration in deeming the Cuban government as repressive, reminding the crowd of the violent crackdown by the police and the national guard against anti-racism protesters in the US last year. “This government has no right to call any government repressive,” he added.

Activists from around the country are gathering in Lafayette Square Park to call for an end to the U.S. blockade of Cuba. #HandsOffCuba #LetCubaLive pic.twitter.com/qPtsNxVkHs

Similar demonstrations were witnessed in other parts of the country. In San Francisco, California, a large caravan of cars and bikes was organized by the ANSWER Coalition, which was joined by dozens of supporters and anti-war protesters.

Elsewhere, including Houston in Texas, Milwaukee in Wisconsin, and New York, activists from ANSWER and PSL held outreach programs, caravans, and demonstrations to educate people about the damaging effects of the US sanctions on Cuba. The Cuban embassy in the US welcomed the demonstrations by PSL and ANSWER, tweeting that the “blockade of Cuba does not express the will of the U.S. people,” along with the hashtag, #UnblockCuba.

The blockade of #Cuba does not express the will of the U.S. people. #UnblockCuba pic.twitter.com/BKFvgCixAY

Comrades spent the afternoon tabling in the Ithaca Commons to speak with people about the urgent need to end the U.S. blockade of Cuba.

Join us at 4 pm on August 8th in Shawn Greenwood (DeWitt) Park for an anti-imperialist Peace Talk about the Cuban Revolution and its victories! https://t.co/EIOJTOTUkT

The protests come just days after a group of over 400 activists, intellectuals, artists and scientists wrote an open letter titled “Let Cuba Live!”, calling on the Biden administration to withdraw the 243 sanctions imposed by the previous Donald Trump administration which directly led to over USD 9.15 billion in losses for Cuba between April 2019 and December 2020. The letter was published along with the names of those sanctioned on the front page of The New York Times as an advertisement.

Instead of responding to the call by activists, president Biden has imposed further sanctions on Cuba targeting government officials in the name of alleged human rights abuses, claiming that the move is “just the beginning.”

The anti-sanctions protest in Washington DC on Sunday was met with hostilities by a group of counter-protesters organized by right-wing groups. Right-wing organizations and anti-communist Cuban emigre groups are also planning a rally in Washington DC to demand president Biden add further pressure on the Cuban government.