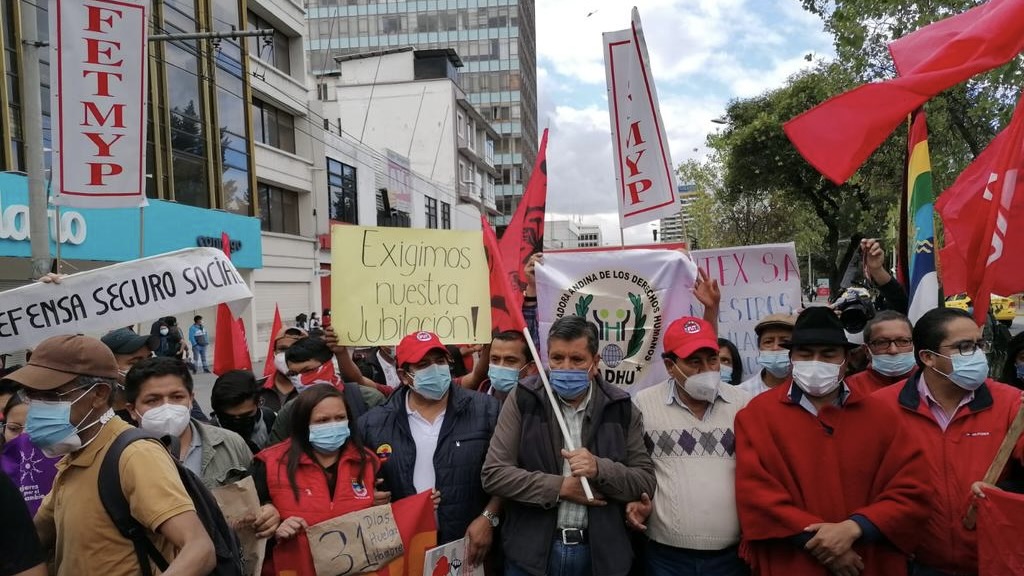 Thousands of Ecuadorians marched against the economic policies of right-wing president Guillermo Lasso in the capital Quito on August 11. Photo: UNE/Twitter

On August 11, thousands of Ecuadorians mobilized across the country against the neoliberal economic policies of the right-wing government of President Guillermo Lasso. Workers, teachers, students, peasants, Indigenous communities and members of social organizations held various peaceful demonstrations in different provinces to demand the annulment of presidential decrees, passed by the previous government, which increased the price of petrol and diesel on a monthly basis.

In the capital Quito, hundreds of workers demonstrated outside the headquarters of the Ecuadorian Social Security Institute (IESS), then marched to the Santo Domingo plaza. In Guayaquil city, a protest was organized at the Centenario Park. In the provinces of Guayas, Los Ríos and El Oro, peasants and Indigenous people blocked major roads and highways with trucks, tractors, sacks of rice and burning tires.

The workers from different sectors expressed their solidarity with the struggle of teachers, who have been carrying out an indefinite hunger strike since July 12 demanding implementation of the Organic Law of Intercultural Education (LOEI). They also expressed their support for the peasant communities’ claims for a fair price of rice and the reopening of the National Storage Unit (UNA). They rejected privatization of state companies and the IESS as well as growing job insecurity in the country under the current administration.

The same day as the national protests, the price of petrol increased to 2.28 USD per gallon, 10 cents more than what its cost was last month. Meanwhile, the price of diesel rose to 1.60 USD, 4 cents higher than what it was in July. Protesters demanded an immediate freeze on fuel prices, maintaining that it affects millions of working class families and makes basic necessities more expensive.

The national protests were called for by the Unitary Front of Workers (FUT), the National Union of Educators (UNE), the Confederation of Indigenous Nationalities of Ecuador (CONAIE) and the Pachakutik Plurinational Unity Movement. They received support from various social movements and other unions and organizations such as the General Union of Ecuadorian Workers (UGTE), the Confederation of Indigenous Nationalities of the Ecuadorian Amazon (CONFENIAE), the Unique Federation of Affiliates to Peasant Social Security (FEUNASSC), the Federation of University Students of Ecuador (FEUE), among numerous others.

Leonidas Iza, president of the CONAIE, while calling for the protest actions on August 10, said that the government of President Lasso “has decided to continue and sustain the same policy of his predecessor Lenín Moreno, conditioned by the International Monetary Fund (IMF).” He also criticized the fact that the current government just like the last government only claims to favor dialogue, but in reality has repeatedly refused to do so with organized sectors on the serious issues facing the country. He recalled that over 80 teachers have been on a hunger strike for 31 days and are waiting for a response to their request for dialogue with the national government.

At the protest in Quito yesterday, Iza stressed that “the economic crisis will not be resolved by privatizing, it will be resolved by repowering the public companies that belong to all Ecuadorians.”

José Villavicencio, president of the UGTE and vice-president of the FUT, urged the head of state to urgently respond to the population’s requests related to job creation, better social security plans and improvements in the education and health sectors.

These protests are the first national protests since Lasso’s inauguration on May 24. The newly elected president has refused to attend to these popular demands. “We are not going to repeal the fuel decree because that would cause serious damage to Ecuador. If we repeal it, we would go backwards in what we have advanced in economic matters. We would damage the international image of the country, the country’s risk would increase and consequently interest rates would rise,” said Lasso in an interview with the digital portal 4 Pelagatos, on the night of August 10.