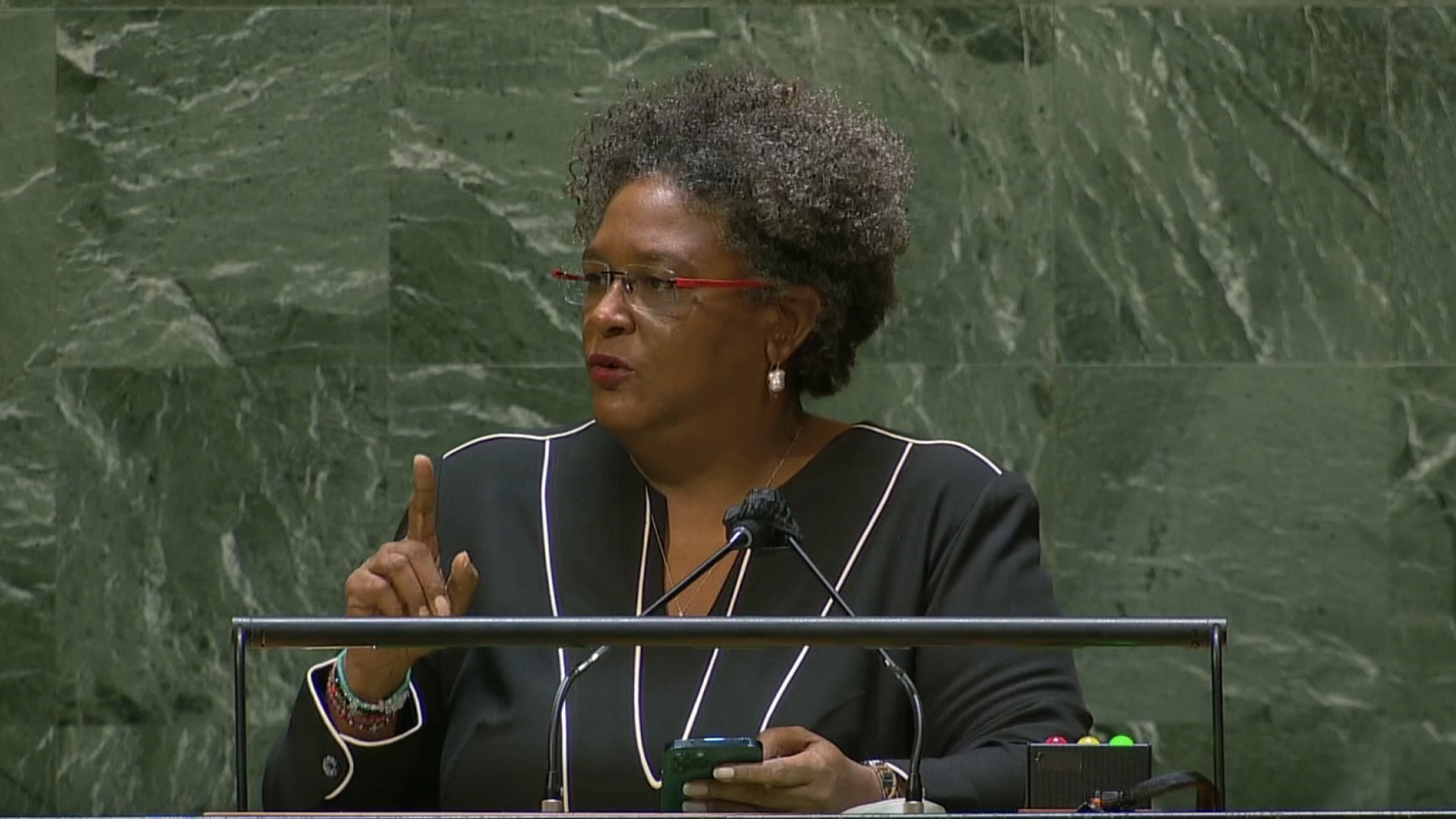 Last weekend on September 25, Prime Minister of Barbados, Mia Amor Mottley made a stirring intervention during her address in near-empty chambers of the United Nations General Assembly during the General Debate 76th Session. Below is a lightly edited transcription of her speech.

If I use the speech prepared for me to deliver today, it would be a repetition, a repetition of what you have heard from and also from me equally, how many more times will we then have a situation where we say the same thing over and over and over to come naught? My friends, we cannot do that anymore. And I ask simply that we recall, three years ago, when I made my maiden speech. I indicated from this very podium and told the international community, that the world appeared awfully similar to what it looked like a hundred years ago.

Barbados made that position clear. Regrettably, we have not come to say ’we told you so’, but we have come to see that the needle has not moved and that we have not seen sufficient action on behalf of the people of this world. I am not here, therefore, to keep you long today and shall be very, very brief.

How many more variants of COVID-19 must arrive? How many more before a world-wide action plan for vaccinations will be implemented? How many more deaths must it take before 1.7 billion access vaccines in the possession of the advanced countries of the world will be shared with those who have simply no access, no access to vaccines? How much more fake news will we allow it to be spread without states defending the public digital space? We’ve come together with alacrity to defend the right of states to tax across the digital space. But we are not prepared to come together with the same alacrity to defend the rights of our citizens to be duped by fake news in the same digital space.

And how many more surges must there be before we ask, when will the world take action? None are safe until all are safe. How many more times will we hear that? And how much more must we do, Madam Vice President, before the global moral strategic leadership, that our world needs, comes?

How much more global temperature rise must there be before we end the burning of fossil fuels. And how much more must sea levels climb in small island, developing states, before those who profited from the stock piling of greenhouse gas contribute to the loss and damage that they occasioned rather than asking us to crowd out the fiscal space that we have for development to cure the damage caused by the greed of others? And how many more hurricanes must destroy, locust devour and islands submerge, before we recognize that a hundred billion dollars in adaptation is simply not even enough?

The answer, Madam Vice President, is that we are waiting for urgent global, moral, strategic leadership. How many more crises must hit before we see an international system that stops dividing us and starts to lift us up?

How many more times must people come to this podium and speak about the plight of the people of Cuba and Haiti, and see very little being done to lift the floor of social development, to give those people the right to pursue legitimate ambitions? How many more crises and natural disasters before we see that all conventions of aid mean the assistance does not reach those who need it most and those who are most vulnerable?

How much wealthier must tech firms get? The top five tech firms have a market capitalization of $9.3 trillion, I didn’t say a billion, trillion dollars. How much more wealthier must they get before we worry about the fact that so few of us have access to data and knowledge and that our children are being deprived of the tools that they need in order to be able to participate in online education.

It is not because we do not have enough. It is because we do not have the will to distribute that which we have. And it is also because, regrettably, the faceless few do not fear the consequences sufficiently. How many more leaders must come to this podium and not be heard before they stopped coming? How many times must we address an empty hall of officials and an institution that was intended to be made for leaders to discuss with leaders the advancement necessary to prevent another great war or any of the other great challenges of our humanity? How many more times, will we stand idly by and see women of color and men of color and women period, be attacked at the leadership of international organizations, disproportionately.

And yes, how many more times must the great needs be met simply by nice words and not have before us the opportunity to see the goodwill that is necessary to prevent nationalism and militarism. The answer, Madam Vice President, is that this age dangerously resembles that of a century.

A time when we were on the eve of the Great Depression, a time when we fought a similar pandemic and a time when fascism, populism and nationalism led to the decimation of populations through actions that are too horrendous for us to even contemplate. Our world knows not what it is gambling with. And if we don’t control this fire, it will burn us all down.

As I said, two years ago, this is not science fiction. And we heard the Secretary General make the same comment on Tuesday morning. This is our reality. It is not science fiction. And if the truth be told, the Secretary General’s speech said it all, but who will stand in here and support him to give him the mandate and our institutions – be it the WHO, IMF, World Bank or the regional development banks and the development institutions – who will give them the mandate to go forward? If we continue to refuse to summon the political will to confront what we know we must confront, I ask us, who in here will sign the new charter, a new charter for the 21st century? That is appropriate not for the next 75 years because the world in which we live moves too quickly, but let us try for the next 25 years to meet the needs of a 21st century. Not the needs of the middle of the 20th century on the aftermath of a world war that none of us can really relate to today.

Who? Who will stand up not with a little token, but with real progress and who standing up for all in our countries who remain and suffer the indignity of unemployment and underemployment and whose access to food is now compromised by increased food and increased transportation prices? Transportation, quite frankly, that has been manipulated.

It is not beyond us to solve this problem. If we can find the will to send people to the moon and solve male baldness, as I’ve said over and over, we can solve simple problems like letting our people eat at affordable prices and making sure that we have the transportation.

We have been told that democracy is what matters in our country and democracy is fundamentally an issue of the majority and numbers, but why don’t we count who stands up in here? Why don’t we take a reckoning for the numbers in here?

My friends, it is against that background that I say to you: This is not 1945 with 50 countries. This is 2021. With many countries that did not exist in 1945, who must face their people and answer the needs of their people, who want to know what is the relevance of an international community that only comes and does not listen to each other, that only talks and will not talk with each other. It is against this background that I say that our voices must be heard and our voices must matter.

And today, Barbados calls at this dangerous fork in the road that the nation states of this assembly and the people of this world must indicate what direction we want our world to go in and not leave it to the faceless few who have worked so hard to prevent the prosperity from being shared, prosperity that is sufficient in this world of being shared with all of our.

I ask you today to support us because we will bring a resolution in plenary to endorse the approach of Antonio Gutierrez as Secretary-General. When I met with him two days ago, I told him we share the same philosophy. We want the same destination. The only issue is what road, what are the obstacles in that road and what are the potholes we must overcome?

My friends, leave UNGA [United Nations General Assembly] in need of another UNGA – one with real engagement and one to secure real progress. That is what he called for Tuesday. I regret that the token initiatives will not close the gap. On Monday morning, I said to the Prime Minister of the United Kingdom, that I was a student in his country and that as we got off the train, there would be a pre-recorded message each time that simply said ‘Mind the gap’. Let us, my friends, not only mind the gap, but determine, as a global community of nations, that numbers matter and that we have the population and the member states to send the signal of the direction that we want our world to go in at this dangerous moment. Let us do so with the calm assurance that those who labor in great causes never ultimately fail, but we must summon the courage to do it.

I ask us, in the name of our people, to find the global, moral, strategic leadership. Global, because our problems are global. Moral, because we must do the right thing. Strategic, because we cannot solve every problem of the world, but we must solve those within our purview, immediately.

Mia Amor Mottley is the Prime Minister of Barbados since 2018, and leader of the Barbados Labour Party.