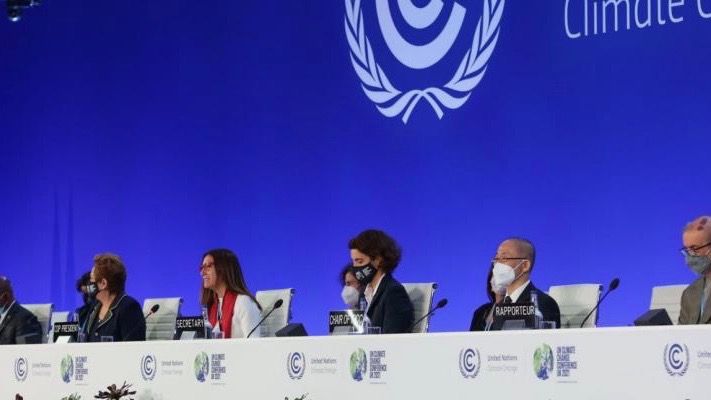 The United Nations Climate Change Conference of Parties, or COP26, began on Sunday, October 31 in Glasgow, Scotland. The meeting, which was delayed by a year due to the COVID-19 pandemic, started on a disappointing note due to the vague commitments made by G20 member states in their just concluded meeting in Rome, Italy. Amid the push by climate activists for urgent steps at the venue, developing countries also raised the issue of “climate financing”.

Inaugurating the meeting, COP26 president Alok Sharma expressed the hope that the talks will help arrest the worst changes “our shared planet” is going through. The summit of the heads of state is scheduled to be held on Monday and Tuesday. According to the UN Framework Convention on Climate Change (UNFCCC) press release, more than 100 heads of state are slated to participate in the meeting on Monday.

The world has seen a number of climate catastrophes in the last few years, from extreme temperatures to wildfires and frequent storms, devastating the lives of millions of people. The effects of climate change were most visible in the developing countries. However, in recent years, countries such as the US and those in the European Union (EU) have also felt the repercussions.

Migration of people in the developing world has intensified due to climate-induced disasters. In many countries, climate change has given birth to new conflicts or intensified existing ones. It has also affected basic means of livelihood such as agriculture. Frequent droughts or floods have led to shortages in local production of food products like grain, mostly in the poorer countries in Asia and Africa, pushing millions to the verge of starvation. Such catastrophic events are expected to increase with the rise in global temperatures.

The UN has warned that the current level of pledges made by countries and their lackluster implementation will lead to a 2.7 degree Celsius rise in global temperature by the end of the current century with devastating consequences.

Meanwhile, on Sunday, UN secretary general António Guterres expressed his disappointment over the vague commitments made by the G20 members at the meeting in Rome. In a press statement released after the meeting, members of the world’s richest economies failed to mention any certain date for achieving net zero in their countries as was expected. They also failed to mention a date for phasing out coal-fired power plants at home while promising financing of such plants outside.

While I welcome the #G20's recommitment to global solutions, I leave Rome with my hopes unfulfilled — but at least they are not buried. Onwards to #COP26 in Glasgow to keep the goal of 1.5 degrees alive and to implement promises on finance and adaptation for people & planet. pic.twitter.com/c1nhIDbA8m

Limiting the rise in the global temperature to 1.5 degree Celsius above pre-industrial levels by the end of the century and actions on the commitments made during the Paris Agreement in 2015 to achieve net zero emissions are the primary issues to be discussed during COP26. The question of financial support to poorer economies to help them cope with issues arising out of emissions reduction and its effects on the livelihood of citizens is also expected to be discussed. Poorer countries have pointed to the failure of rich nations to mobilize USD 100 billion every year for climate financing by 2020, as was agreed in 2009.

Poor and developing countries agreed in principle about the shared responsibility in tackling the climate crisis and committed to take steps to help limit the rise in global temperature in the Paris Agreement of 2015. However, due to hesitancy from rich countries such as the US and their inadequate response to those commitments, many other countries have also shown hesitancy. A large number of poor countries have complained about the lack of enough emphasis on financial compensation in the global climate talks.

India, the world’s third largest emitter of greenhouse gases, has refused to commit to net zero, saying days before the Glasgow meet that it is not the solution. Claiming that such targets will create a huge financial burden on poorer countries, India emphasized that financial help is the “historic responsibility” of the developed world before expecting climate actions at par with them.

Tejal Kanitkar, who teaches at the National Institute of Advanced Studies in Bengaluru, India, wrote in The Indian Express about the failure of developed countries to do their bit in the global fight against climate change, but instead expecting the developing countries to do more. “The pressure on developing countries to “do more” and declare similar net zero pledges is nothing but shifting the burden of climate action onto the backs of the world’s poorest populations,” Kanitkar wrote.

Responding to such claims, Patricia Espinosa, executive secretary of UN COP26, said on Sunday, “we need to leave Glasgow with a balanced package of decisions that reflects the position of all countries.”

Meanwhile, climate activists have gathered in Glasgow to demand urgent measures to cut greenhouse gases emissions from the heads of state attending the meeting. Activists from the Extinction Rebellion took out a march on Saturday. Several other groups have also announced marches and other forms of protest actions throughout the week. Such protests are also being organized in other parts of the world.