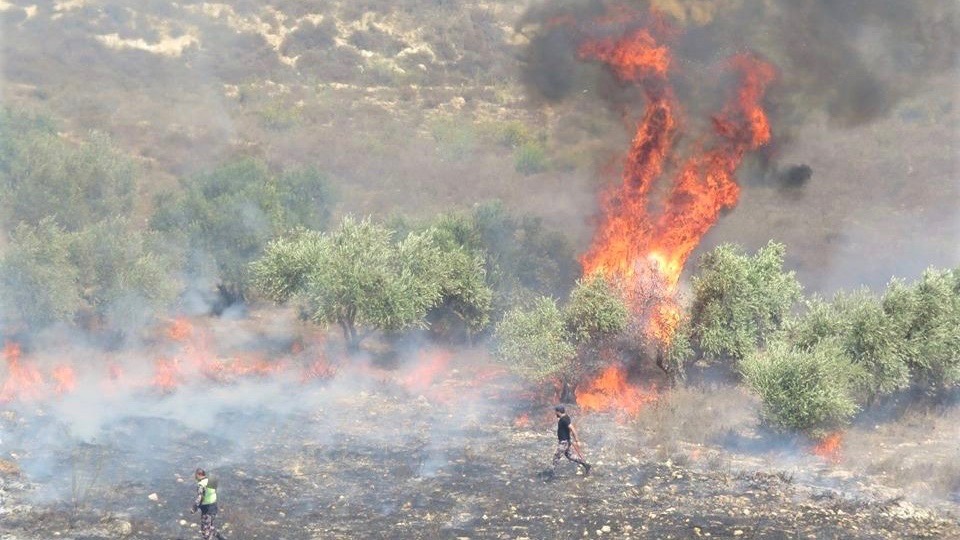 Israeli settlers have been accused of repeatedly setting fire to Burin's olive groves, such as here in 2017. (Photo: MEE/Muna Asous)

Israeli human rights group B’Tselem in a report on Sunday, November 14, stated that it has documented 451 instances of settler violence against Palestinians in the occupied West Bank since the beginning of 2020. It claimed that in most of the cases, Israeli security forces did not intervene to stop the violence or protect the Palestinians. According to the report, in 66% of such settler attacks, the Israeli forces did not even report to the scene. In 170 attacks, Israeli forces were present on the scene but either did not intervene, or actively participated in the attacks, resulting in the deaths of five Palestinians and the arrest of 22 others. In only 13 attacks did the Israeli forces take action to “prevent the settler violence.”

According to the report, “the state fully supports and assists these acts of violence, and its agents sometimes participate in them directly. As such, settler violence is a form of government policy, aided and abetted by official state authorities with their active participation. Settler attacks against Palestinians are a strategy employed by the Israeli apartheid regime, which seeks to advance and complete its misappropriation of more and more Palestinian land. When the violence occurs with permission and assistance from the Israeli authorities and under its auspices, it is state violence. The settlers are not defying the state; they are doing its bidding.”

Such acts of violence aimed at intimidating Palestinians constitute one of the two main ways that Israel confiscates and annexes Palestinian land, the other being with the help of the judicial system to officially misappropriate and take over Palestinian property.

The report includes several instances of settler violence to show how the illegal Israeli settlers and the Israeli state work hand-in-hand to execute this systematic “massive takeover” of Palestinian land. One of the cases cited involved the Ma’on farm, an illegal outpost erected in the southern West Bank on about one square mile of land. As per the report, settlers here have regularly attacked and harassed Palestinians in the area who used to historically use the land for pasture. This ultimately resulted in the confiscation of the land by the Israeli state. The farm now illegally occupies about 264 hectares (652 acres) of land and also now has an additional sub-post.

According to B’Tselem, violent attacks by settlers against Palestinians have seen an uptick in recent months, especially during the olive harvesting season in the months of October and November. The livelihood of approximately 80,000-100,000 Palestinian families is dependent on olive harvesting. Moayyad Besharat, programs and project manager at the Union of Agricultural Work Committees, added that the olive harvest this season has been the toughest in recent memory.

Ghassan Daghlas, who monitors settler violence in the northern West Bank, said that these attacks are “planned and not spontaneous.” While such settler attacks have been documented in books, research reports and documentaries, little or no action has been taken by the Israeli authorities against the settlers, says the report. It states that “Israel’s inaction continues after settler attacks on Palestinians have taken place, with enforcement authorities doing their utmost to avoid responding to these incidents. Complaints are difficult to file, and in the very few cases in which investigations are in fact opened, the system quickly whitewashes them. Indictments are hardly ever filed against settlers who harm Palestinians and when they do, usually cite minor offenses, with token penalties to match in the rare instance of a conviction.”

The report emphasizes that settlers act as a proxy of the state and inaction by the authorities encourages such violence. B’Tselem said that “state violence – official and otherwise – is part and parcel of Israel’s apartheid regime, which aims to create a Jewish-only space between the Jordan River and the Mediterranean Sea.”