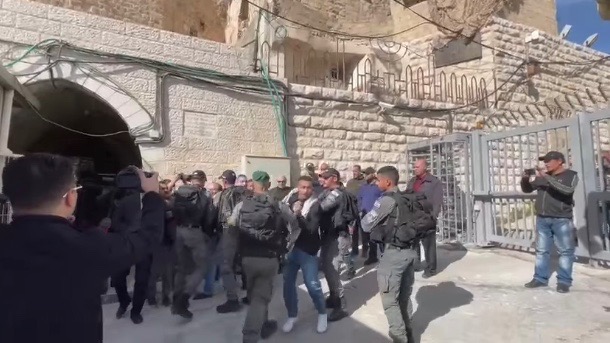 On Sunday, November 28, Palestinian protesters opposing the visit of Israeli president Isaac Herzog to the Ibrahimi mosque in Hebron were attacked by the occupying forces. Despite the widespread Palestinian and Arab opposition, Herzog entered the mosque amid high military presence.

Israeli forces surrounded the mosque and nearby areas and forced the Palestinians there to shut their businesses. The security forces fired teargas and stun grenades at the protesters. They also did not allow any Palestinian to visit the mosque, preventing them from praying.

The president was accompanied by members of the Israeli parliament and leaders of the settler movement in the occupied Palestinian territories.

The visit, to mark the occasion of the Jewish festival of Hanukkah, was deemed provocative and a violation of the sanctity of the site, as per the Palestinian Authority (PA), Wafa news reported. Several other Palestinian groups also condemned the move calling it an extension of Israel’s illegal settlement building in the Palestinian territories and an attempt to create facts on the ground.

Speaking to Lebanese al-Mayadeen, leader of the Palestinian Liberation Movement, Abu Yousef, argued that “the occupation is trying to impose new facts on the ground through the storming” of the mosque by Herzog.

The Arab League also issued a statement condemning the move, calling it part of the “continued and persistent Judaization of Islamic and Christian holy sites by the occupation forces,” Wafa reported.

Creating facts on the ground

Apart from building hundreds of illegal settlements inside the occupied Palestinian territories, Israel is also accused of trying to establish exclusive Jewish control over some important religious sites, including the Al-Aqsa mosque in Jerusalem. Hebron is one of the major cities in the occupied West Bank lying around 30 kilometers south of Jerusalem, with an estimated population of 160,000. Around 800 illegal settlers also live in the city, protected by hundreds of Israeli security forces.

Hebron city is divided into two parts, namely H1 and H2. While both parts are directly administered by the PA, the Ibrahimi Mosque and H2 area are heavily guarded by the Israeli military with hundreds of checkpoints. Some parts of H2 are Jewish-only areas and completely prohibited for Palestinians.

Extremist Jews want to convert the Ibrahimi mosque built in the 12th century into a Jewish monument. After a Jewish religious fanatic, Baruch Goldstein, killed 29 Palestinians and injured over a hundred others inside the Ibrahimi Mosque in 1994, the Wye River Accords of 1996 created a partition of the site with Palestinians controlling most of the compound in which Jews were not allowed to enter except for 10 days of the year. Palestinians have accused Israel of violating this agreement in an attempt to Judaize the mosque.

Before Herzog, former Israeli prime minister Benjamin Netanyahu visited the mosque in 2019. Opposition Israeli politicians had called the visit an attempt to polarize right-wing Jewish votes in his favor in the elections. Herzog’s visit has also invited some political opposition in Israel, with left-wing Meretz, also a part of the ruling coalition led by Naftali Bennet, calling it a wrong decision.