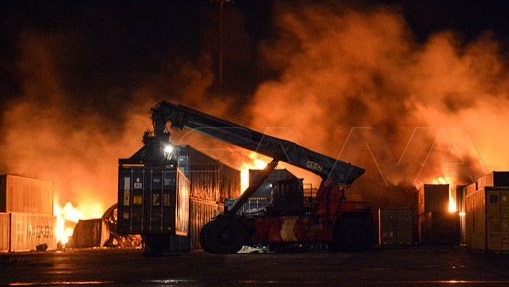 Israel’s unprovoked attacks inside Syria continue. Early on the morning of Tuesday, December 28, its aircraft launched several missiles at the Latakia port causing damage at the facility and nearby civilian areas. This was the second attack on the port this month.

Quoting a military source, the Syrian Arab News Agency (SANA) said in a report that “about 3:21 a.m. on Tuesday, the Israeli enemy launched an aerial aggression with a wave of missiles from the depth of the Mediterranean sea, west of Latakia, targeting the container yard.”

SANA also reported that since the missiles hit containers storing oil and other inflammable material, it caused a massive fire and material damage. Syrian firefighters took hours to douse the fire. The explosion was so strong that it was heard by people dozens of kilometers away. The explosion and the fire also reportedly damaged al-Nada hospital and some buildings nearby.

No casualties were reported from the attack.

Latakia is the most important commercial port of Syria and its crucial link with the outside world since the war broke out in 2011. Syria imports most of its food and other essential supplies through the port. The Russian air base in Syria is nearly 20 km away from the site of the attack.

Israel has neither confirmed nor denied the attacks on Tuesday. It has carried out hundreds of such attacks inside Syria since 2011. In the last two months, its attacks have increased leading to several civilian casualties. Last month, in one such attack, at least two civilians were killed in Homs. On the rare occasions when it does acknowledge such attacks, Israel tries to justify them as defensive claiming that the targets were the Lebanese Hezbollah group or alleged Iranian bases in the country.

Syria has often raised the issue of these unprovoked attacks at the UN Security Council terming it an assault on its sovereignty and international law. Syria has also accused Israel of aiding rebel extremist forces in order to prolong the war in the country.

Israel just bombed Syria's Latakia in the early hours of the morning, in yet another unprovoked attack.

And as per usual, there won't be a single drop of international outrage to speak of.

Complaints have also been raised by Lebanon against Israel for violating its airspace to carry out such attacks inside Syria. The UNSC has failed to take any measure against Israel so far.