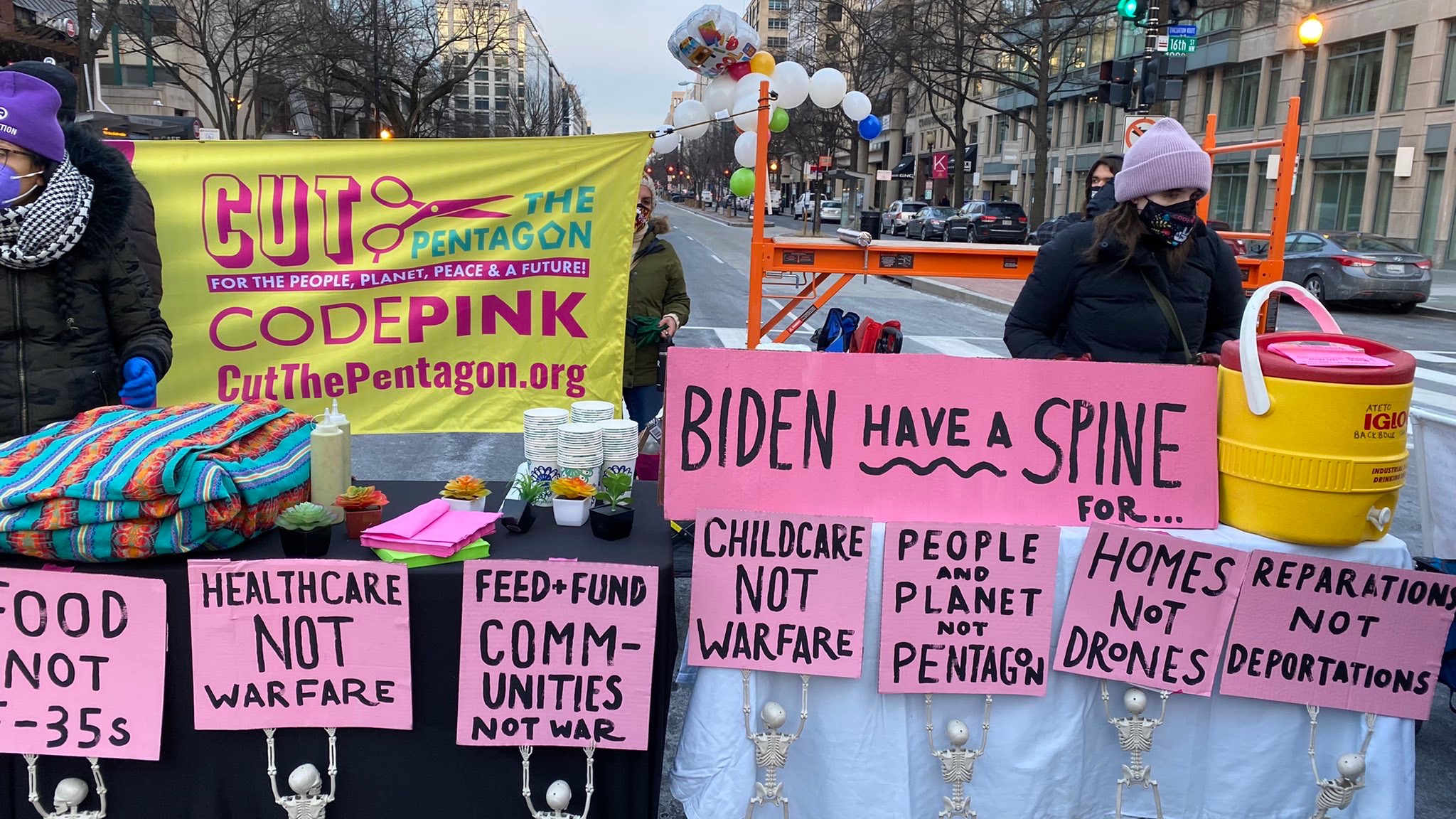 Protest against US support for the war in Yemen. (Photo: CODEPINK/Twitter)

On the eve of the first anniversary of the US declaring an end to its role in the war in Yemen, the Joe Biden administration has decided to increase the deployment of advanced weapons in the United Arab Emirates (UAE) to assist it in facing “current threats.” The decision was announced by US secretary of defense Llyod Austin on Wednesday, February 2, in a phone conversation with UAE ruler and Abu Dhabi crown prince Abu bin Zayed al Nahyan.

According to news reports following the press conference later held by Pentagon spokesperson John Kirby, the US is planning to deploy a guided missile destroyer, USS Cole, and fifth generation fighter jets including F-22 Raptors and F-35 Lighting II in the UAE. Kirby claimed that the deployment is to protect US troops and assist against the “very real threats that Emiratis are under.”

I spoke with Abu Dhabi Crown Prince @MohamedBinZayed of the UAE to condemn recent Houthi attacks. To support the UAE against these threats, I will deploy 5th Gen Fighters to the region and send the USS Cole to conduct a joint patrol with the UAE Navy and a port call to Abu Dhabi. pic.twitter.com/rf4ubqqGqT

The decision to increase the deployment of weapons comes after the US patriotic missile defense system intercepted a number of missiles over Abu Dhabi on Monday. This was the third such missile attack since January 17 when three foreign workers were killed and the Abu Dhabi international airport was damaged.

On Thursday, February 3, the UAE’s ministry of defense claimed that its forces intercepted and destroyed three drones on Wednesday, without revealing the source of the threat.

MOD announces interception and destruction, away from populated areas, of three hostile drones that penetrated UAE airspace at dawn today, 2/2/2022. MOD confirms it is ready to deal with any threats and is taking all necessary measures to protect the state and its territory. pic.twitter.com/xXvbsQByP6

Al-Jazeera reported that a little known Iraqi group called Awliya Wa’ad al-Haq had claimed responsibility for the attacks on Wednesday.

Since January 17, the UAE and Saudi Arabia have launched massive air strikes inside Yemen killing hundreds of people. The Houthis have threatened to retaliate saying that future attacks on the UAE would be more “stinging and painful.”

The Houthis also warned foreign investors and tourists to stay away from the UAE. Following this, the US issued travel advisories to its citizens to avoid visiting the country. A similar advisory was also issued by the UK on Wednesday.

The UAE is the main partner in the Saudi-led coalition which has been waging a war in Yemen since 2015 and imposed a comprehensive land, sea and air blockade of the country. The UAE is also one of the closest US allies in the region, and has around 2,000 US troops permanently stationed on its territory. These troops provide assistance for air defense operations and early warning systems. The US base in the country is also used for drone operations in the region.

The US has been suspected of assisting the UAE-led air strikes in Yemen since 2015, in which thousands of innocent civilians have been killed. The UAE is also one of the largest buyers of US weapons which have also been used against the people of Yemen.

Secretary of "Defense" Lloyd Austin, the man who's sending MORE fighter jets and a ship to back the brutal Emirati-Saudi-led war on Yemen, also happens to be a former member of Raytheon's Board.

Though the UAE had announced the withdrawal of its ground troops from Yemen in 2020, it has provided crucial training and weapons support to troops fighting against the Houthis. Earlier this month, the coalition backed troops claimed that they had retaken parts of Marib and Sabwah provinces from the Houthis.

After assuming office in January 2021, president Biden had declared the end of the US’ role in the Saudi-led coalition’s war in Yemen. However, his administration has continued to supply armaments to Saudi Arabia and the UAE and also aided their so-called defensive operations in the war.

Following the Houthi attacks on Abu Dhabi, Biden, under UAE pressure, expressed his intentions to redesignate them as a terrorist organization. He had earlier reversed the decision by the Donald Trump administration to designate Ansar Allah (Houthis) as a terrorist organization following a widespread campaign led by human rights and aid groups active in Yemen. These groups argued that such designation would lead to further complications in the humanitarian situation in the country as the majority of Yemenis live in areas governed by the Ansar Allah group.