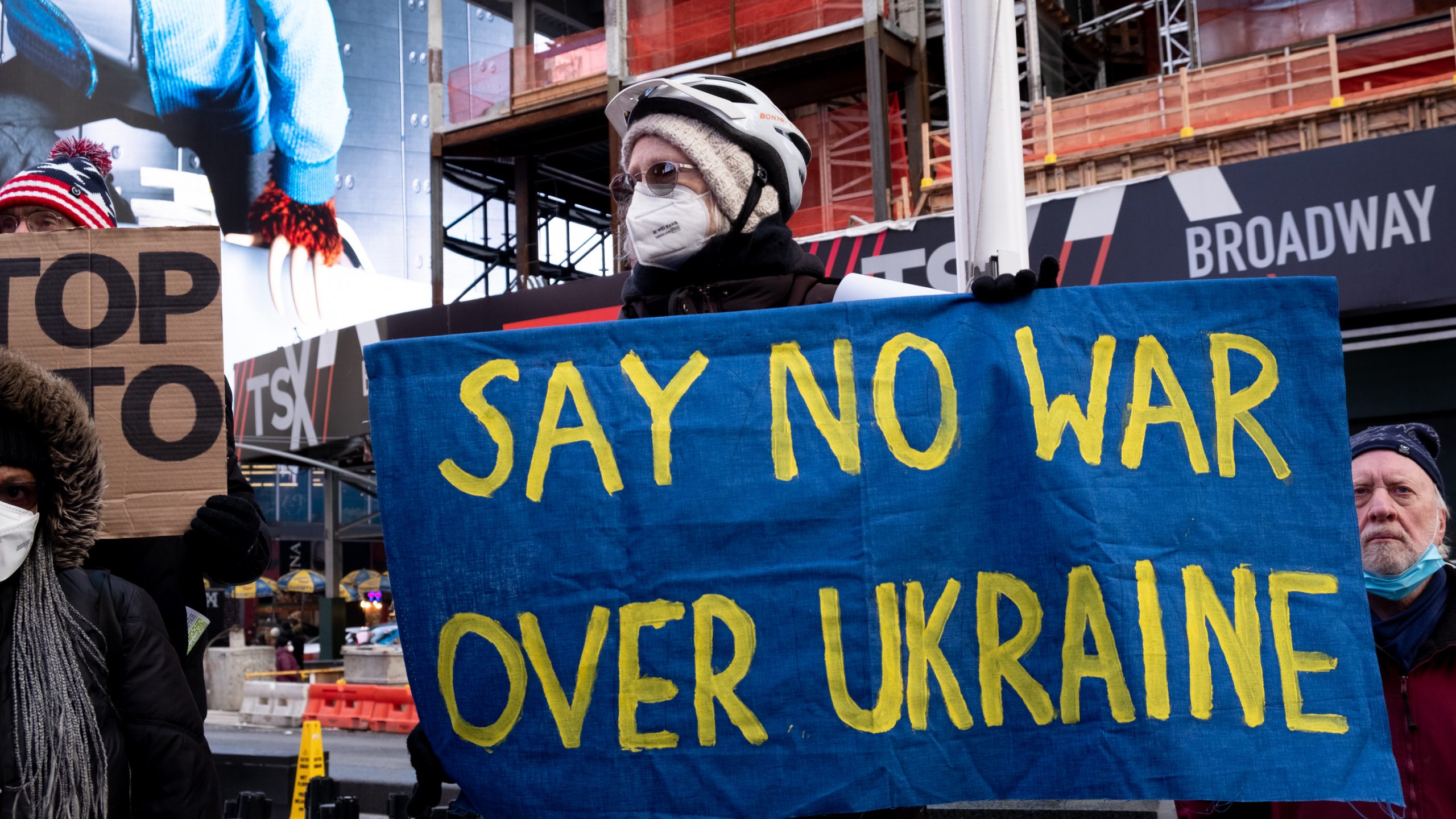 Protest for peace with Russia this past Saturday, February 5 (Photo: Wyatt Souers)

While the Biden administration is sending more troops and weapons to inflame the Ukraine conflict and Congress is pouring more fuel on the fire, the people in the US are on a totally different track.

The conservative Koch Institute, which commissioned that poll, concluded that “the United States has no vital interests at stake in Ukraine and continuing to take actions that increase the risk of a confrontation with nuclear-armed Russia is therefore not necessary for our security. After more than two decades of endless war abroad, it is not surprising there is wariness among the American people for yet another war that wouldn’t make us safer or more prosperous.”

The most anti-war popular voice on the right is Fox News host Tucker Carlson, who has been lashing out against the hawks in both parties, as have other anti-interventionist libertarians.

On the left, the anti-war sentiment was in full force on February 5, when over 75 protests took place from Maine to Alaska. The protesters, including union activists, environmentalists, healthcare workers and students, denounced pouring even more money into the military when we have so many burning needs at home.

You would think Congress would be echoing the public sentiment that a war with Russia is not in our national interest. Instead, taking our nation to war and supporting the gargantuan military budget seem to be the only issues that both parties agree on.

Most Republicans in Congress are criticizing Biden for not being tough enough (or for focusing on Russia instead of China) and most Democrats are afraid to oppose a Democratic president or be smeared as Putin apologists (remember, Democrats spent four years under Trump demonizing Russia).

Both parties have bills calling for draconian sanctions on Russia and expedited “lethal aid” to Ukraine. The Republicans are advocating for $450 million in new military shipments; the Democrats are one-upping them with a price tag of $500 million.

Progressive Caucus leaders Pramila Jayapal and Barbara Lee have called for negotiations and de-escalation. But others in the Caucus–such as Reps. David Cicilline and Andy Levin–are co-sponsors of the dreadful anti-Russia bill, and Speaker Pelosi is fast-tracking the bill to expedite weapons shipments to Ukraine.

But sending more weapons and imposing heavy-handed sanctions can only ratchet up the resurgent US Cold War on Russia, with all its attendant costs to American society: lavish military spending displacing desperately needed social spending; geopolitical divisions undermining international cooperation for a better future; and, not least, increased risks of a nuclear war that could end life on Earth as we know it.

For those looking for real solutions, we have good news.

Negotiations regarding Ukraine are not limited to President Biden and Secretary Blinken’s failed efforts to browbeat the Russians. There is another already existing diplomatic track for peace in Ukraine, a well-established process called the Minsk Protocol, led by France and Germany and supervised by the Organization for Security and Cooperation in Europe (OSCE).

The civil war in Eastern Ukraine broke out in early 2014, after the people of Donetsk and Luhansk provinces unilaterally declared independence from Ukraine as the Donetsk (DPR) and Luhansk (LPR) People’s Republics, in response to the US-backed coup in Kiev in February 2014. The post-coup government formed new “National Guard” units to assault the breakaway region, but the separatists fought back and held their territory, with some covert support from Russia. Diplomatic efforts were launched to resolve the conflict.

The original Minsk Protocol was signed by the “Trilateral Contact Group on Ukraine” (Russia, Ukraine, and the OSCE) in September 2014. It reduced the violence, but failed to end the war. France, Germany, Russia, and Ukraine also held a meeting in Normandy in June 2014 and this group became known as the “Normandy Contact Group” or the “Normandy Format.”

All these parties continued to meet and negotiate, together with the leaders of the self-declared Donetsk (DPR) and Luhansk (LPR) People’s Republics in Eastern Ukraine, and they eventually signed the Minsk II agreement on February 12, 2015. The terms were similar to the original Minsk Protocol, but more detailed and with more buy-in from the DPR and LPR.

The Minsk II agreement was unanimously approved by the UN Security Council in Resolution 2202 on February 17, 2015. The United States voted in favor of the resolution, and 57 Americans are currently serving as ceasefire monitors with the OSCE in Ukraine.

The key elements of the 2015 Minsk II Agreement were:

– an immediate bilateral ceasefire between Ukrainian government forces and DPR and LPR forces;

– the withdrawal of heavy weapons from a 30-kilometer-wide buffer zone along the line of control between government and separatist forces;

– elections in the secessionist Donetsk (DPR) and Luhansk (LPR) People’s Republics, to be monitored by the OSCE; and

– constitutional reforms to grant greater autonomy to the separatist-held areas within a reunified but less centralized Ukraine.

The ceasefire and buffer zone have held well enough for seven years to prevent a return to full-scale civil war, but organizing elections in Donbas that both sides will recognize has proved more difficult.

The DPR and LPR postponed elections several times between 2015 and 2018. They held primary elections in 2016 and, finally, a general election in November 2018. But neither Ukraine, the United States nor the European Union recognized the results, claiming the election was not conducted in compliance with the Minsk Protocol.

For its part, Ukraine has not made the agreed-upon constitutional changes to grant greater autonomy to the separatist regions. And the separatists have not allowed the central government to retake control of the international border between Donbas and Russia, as specified in the agreement.

The Normandy Contact Group (France, Germany, Russia, Ukraine) for the Minsk Protocol has met periodically since 2014, and is meeting regularly throughout the current crisis, with its next meeting scheduled for February 10 in Berlin. The OSCE’s 680 unarmed civilian monitors and 621 support staff in Ukraine have also continued their work throughout this crisis. Their latest report, issued February 1, documented a 65% decrease in ceasefire violations compared to two months ago.

But increased US military and diplomatic support since 2019 has encouraged President Zelensky to pull back from Ukraine’s commitments under the Minsk Protocol, and to reassert unconditional Ukrainian sovereignty over Crimea and Donbas. This has raised credible fears of a new escalation of the civil war, and US support for Zelensky’s more aggressive posture has undermined the existing Minsk-Normandy diplomatic process.

Zelensky’s recent statement that “panic” in Western capitals is economically destabilizing Ukraine suggests that he may now be more aware of the pitfalls in the more confrontational path his government adopted, with US encouragement.

The current crisis should be a wake-up call to all involved that the Minsk-Normandy process remains the only viable framework for a peaceful resolution in Ukraine. It deserves full international support, including from US Members of Congress, especially in light of broken promises on NATO expansion, the US role in the 2014 coup, and now the panic over fears of a Russian invasion that Ukrainian officials say are overblown.

On a separate, albeit related, diplomatic track, the United States and Russia must urgently address the breakdown in their bilateral relations. Instead of bravado and one upmanship, they must restore and build on previous disarmament agreements that they have cavalierly abandoned, placing the whole world in existential danger.

Restoring US support for the Minsk Protocol and the Normandy Format would also help to decouple Ukraine’s already thorny and complex internal problems from the larger geopolitical problem of NATO expansion, which must primarily be resolved by the United States, Russia and NATO.

The United States and Russia must not use the people of Ukraine as pawns in a revived Cold War or as chips in their negotiations over NATO expansion. Ukrainians of all ethnicities deserve genuine support to resolve their differences and find a way to live together in one country – or to separate peacefully, as other people have been allowed to do in Ireland, Bangladesh, Slovakia and throughout the former USSR and Yugoslavia.

In 2008, then-US Ambassador to Moscow (now CIA Director) William Burns warned his government that dangling the prospect of NATO membership for Ukraine could lead to civil war and present Russia with a crisis on its border in which it could be forced to intervene.

In a cable published by WikiLeaks, Burns wrote, “Experts tell us that Russia is particularly worried that the strong divisions in Ukraine over NATO membership, with much of the ethnic-Russian community against membership, could lead to a major split, involving violence or at worst, civil war. In that eventuality, Russia would have to decide whether to intervene; a decision Russia does not want to have to face.”

Since Burns’s warning in 2008, successive US administrations have plunged headlong into the crisis he predicted. Members of Congress, especially members of the Congressional Progressive Caucus, can play a leading role in restoring sanity to US policy on Ukraine by championing a moratorium on Ukraine’s membership in NATO and a reinvigoration of the Minsk Protocol, which the Trump and Biden administrations have arrogantly tried to upstage and upend with weapons shipments, ultimatums and panic.

OSCE monitoring reports on Ukraine are all headed with the critical message: “Facts Matter.” Members of Congress should embrace that simple principle and educate themselves about the Minsk-Normandy diplomacy. This process has maintained relative peace in Ukraine since 2015, and remains the UN-endorsed, internationally agreed-upon framework for a lasting resolution.

If the US government wants to play a constructive role in Ukraine, it should genuinely support this already existing framework for a solution to the crisis, and end the heavy-handed US intervention that has only undermined and delayed its implementation. And our elected officials should start listening to their own constituents, who have absolutely no interest in going to war with Russia.

Nicolas J. S. Davies is an independent journalist, a researcher with CODEPINK and the author of Blood on Our Hands: The American Invasion and Destruction of Iraq.