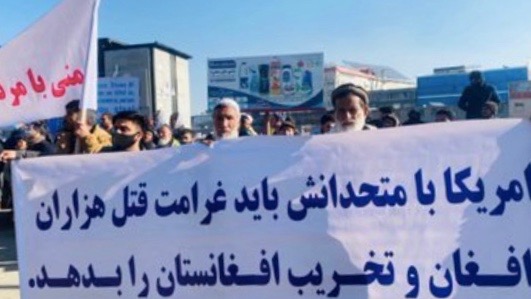 Hundreds of Afghans marched in the capital Kabul and other cities on Monday, February 15, to protest against the US decision to divert nearly half of Afghanistan’s frozen assets held in its banks to victims of the September 11, 2001 terrorist attacks in New York and Washington. Protesters asserted that the people of Afghanistan are not responsible for the actions of the Taliban, which is accused by the Joe Biden administration of sheltering Al-Qaeda that was responsible for the attack.

Protesters demanded that the US and the international institutions release all of Afghanistan’s frozen assets, nearly USD 10 billion, to the country. They claimed that the decision taken by the Biden administration is illegal and unfair.

Similar protests were organized in different parts of Afghanistan on Saturday as well.

Several Afghans also took to social media to oppose the US move, calling it outrageous and shortsighted which will “serve to worsen a catastrophe in progress” in Afghanistan.

President Biden's decision to set aside half of Afghanistan's frozen reserves to 9/11 families is short-sighted, cruel, and will worsen a catastrophe in progress, affecting millions of Afghans, many of whom are on the verge of starvation.

The Taliban had issued a statement last week calling the move the “lowest level of human and moral decay of a country and a nation.”

US president Joe Biden, despite opposition from human rights groups and the Afghan government, signed an executive order last Friday to divide the USD 7 billion of frozen Afghan funds it holds into two. According to the claims made by his administration, half of this money, USD 3.5 billion, will go to Afghanistan for humanitarian aid and the other half will be kept in the US for victims of the September 11 attacks who have filed litigation in US courts for compensation.

The Biden administration also claimed that it is looking for ways to send the remaining money to Afghanistan “while keeping them out of the hands of Taliban and malicious actors.”

We ask worldwide humanitarian aid groups to refuse receipt of the $3.5 billion in Afghan money commandeered by Biden and call on other countries and institutions not to cooperate in the implementation of his unjust order. #UnfreezeAfghanistan https://t.co/WtnCkDvjqx

Biden should not steal Afghan money

CODEPINK, an anti-war group in the US, started a petition on Monday asking “Biden not to steal from the Afghan people.” The group said that “Afghan people are not responsible for 9/11 and more than humanitarian aid, they need their money to be returned to their Central Bank to shore up their collapsing economy” and that “these funds are not Biden’s to distribute.”

The US and its allies froze nearly USD 10 billion of Afghan assets following Taliban’s takeover of power on August 15 last year. The freezing of Afghan assets had led to widespread global condemnation. Various countries, including China and Russia, as well as the UN, have demanded that the US release the funds to Afghanistan, given the overall humanitarian situation in the country. According to the UN, due to decades of war and a prolonged drought, there is nearly universal poverty in Afghanistan and millions of Afghans are facing a severe crisis due to lack of enough food, medicines, and other basic amenities. The money frozen in the US may help the government to address some of these issues and can save millions of lives.

“Democracy is our word”: Historic exchange between Venezuela, Cuba, and US working people held in New York
RECENT ARTICLES