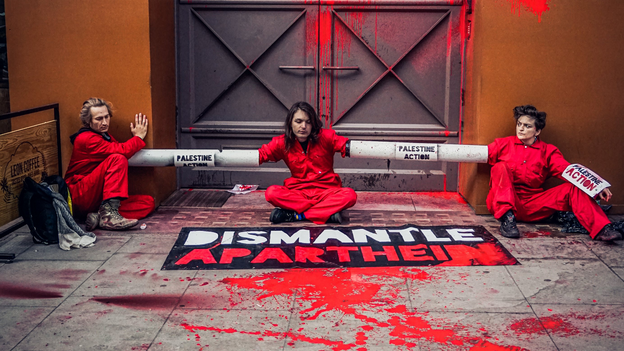 On Tuesday, April 12, activists of Palestine Action in UK defaced the London headquarters of Israel’s largest military and arms company, Elbit Systems, whose weapons and surveillance technology has been systematically used against Palestinians in occupied territories. Four activists have been arrested after they halted the operations at this site using a body ‘lock-on.’

“The lock was on the cylinder tube which they were tied on to, blocking the entrance to Elbit’s HQ, hence closing them down,” a spokesperson of Palestine Action told Peoples Dispatch. “The police had to cut through the tubes before the activists could be moved and arrested.”

The activists also drenched the exterior of its building with the red paint sprayed from a modified fire extinguisher, to symbolize the “blood spilled by Elbit’s business.”

The US government, followed by Israel’s Ministry of Defense, are its two largest customers. The UK too “is a significant market for Elbit Systems and the Company intends to continue with its efforts to support the British Armed Forces and expand the cooperation with the UK industry,” according to Elbit Systems UK CEO, Martin Fausset. He affirmed this when Elbit was awarded a £102 million ( USD132.8 million) contract by the UK’s Defense Ministry last year.

“I do think that we have to consider ourselves, who have grown up with British passports and can even cross borders, actually responsible,” said one of the detained activists Lisa Minerva Luxx.

An author and performer from Lebanese-Syrian diaspora, she had posted a video statement posted ahead of the actions, explaining, “We have to step into some kind of responsibility, while we’re here in the UK. UK is the ground zero for so much evil, unethical moral rot, then we have to start tugging at the root.”.

Profiting from war and occupation

Companies profiting from producing instruments of war and occupation, the Palestine Action believes, are very much at the root. The apartheid wall illegally built by the Israeli occupation to cage in the Palestinians is monitored by Elbit system’s surveillance product called ‘Torch’. Noting that the company is thus complicit in this “violation of international humanitarian law,” Norway’s Finance Ministry had excluded Elbut Systems from Government Pension Fund – Global in 2009.

“Elbit’s Hermes drones were one of the two main unpiloted aircraft used to attack people in Gaza during Israel’s 2009 Operation Cast Lead attack, which killed over 1,400 Palestinians,” according to Corporate Watch. “Elbit’s 7.5 Skylark mini-UAV.. was heavily used for support of ground military actions in Israel’s 2014 attack on Gaza, Operation Protective Edge, which killed 2,202 Palestinians.”

Who Profits from the Occupation, an independent research center, notes that “Elbit drones were in use and the company’s personnel were part of the operation room of a special drones unit deployed during Israel’s 11-day onslaught against Gaza in May 2021, which left 248 people dead and over 1,900 injured.”

That quarter of 2021 alone, the company reported a 20.7% increase in its income, adding up to about USD1.3 billion. In the following quarter, hundreds of millions of dollars worth of new contracts were given to the company by the Israeli military, which procures 85% of its land-based equipment and drones from Elbit.

However, 80% of Elbit’s sales are to foreign markets, mainly the governments of US, UK and Europe, but also to those in Africa, Asia and South America.

A decade ago, in 2012, the UN Special Rapporteur on the situation of human rights in the Palestinian territories, Richard Falk, had called on a boycott of a list of companies, including Elbit Systems. He had listed it among the profiteers of the occupation and war, which has been recognized by the UN several times as illegal and a violation of international law.

However, the company’s growth over the following decade, in the course of which it has bought up several competitors, is a testimony to how dismissive the governments and corporations have been of Falk’s concern for international law and human rights.

Nevertheless, Israel’s relentless oppression of Palestinians, illegal occupation, and apartheid regime continue to be met with resistance in Palestine and across the world. Palestine Action is part of this wave of solidarity efforts with the struggle for Palestinian liberation. The group undertakes direct action to raise awareness and mobilize people in Britain to oppose UK’s complicity in Palestine’s occupation.

The first direct action undertaken by the group after its establishment in July 2020 was against this same London HQ of Elbit at 77 Kingsway.

“The site has been hit by activists extensively since, as has Jones Lang LaSalle (JLL), who lease the site to Elbit and have spent considerable money providing Elbit with 24/7 site security,” the organization said in a press release.

Direct actions by this group have also targeted other British plants of the Israeli company. In January, Elbit was forced to shut down its factory in Oldham following sustained protests by Palestine Action. Its Leicester plant was shut on March 28. Its factory in Tamworth, “used for the manufacture of specialist military technologies for the Israeli army,” has been targeted multiple times.

“The factory was still badly damaged from previous action taken to shut the site down, when on February 28 2022, 5 activists tore the roof of the factory apart with their bare hands. The action caused £250,000 in damages to the company, and – with tarpaulin still covering the place where the roof used to be – activists have returned to make clear that this campaign will continue until Elite KL, and all Elbit operations in Britain, are shut down permanently,” it said in a press statement on March 30, when its activists targeted this plant.

“After scaling the factory at 6:30 this morning, activists on the roof were savagely attacked by masked private security guards. At dangerous heights atop the factory, members of Palestine Action were punched, kicked and choked whilst police refused to intervene,” it added. Six activists were arrested.

Less than two weeks later, on April 12, other activists of the organization struck Elbit’s London HQ again. “Today’s action, aimed at the face of Elbit, reaffirms that Israel’s warlords have no place in Britain..  Elbit, we’re coming for you,” said Palestine Action’s spokesperson in a statement.

“The justice which cannot be found inside colonial empire law courts, or through lobbying those who refuse to listen, will be found through the actions of committed actionists,” notes an earlier statement of the organization.

“Every smashed roof tile, thrown stone, drop of red paint or Palestine colored smoke flare holds within it the hope of a future where Elbit is unable to function in Britain.”