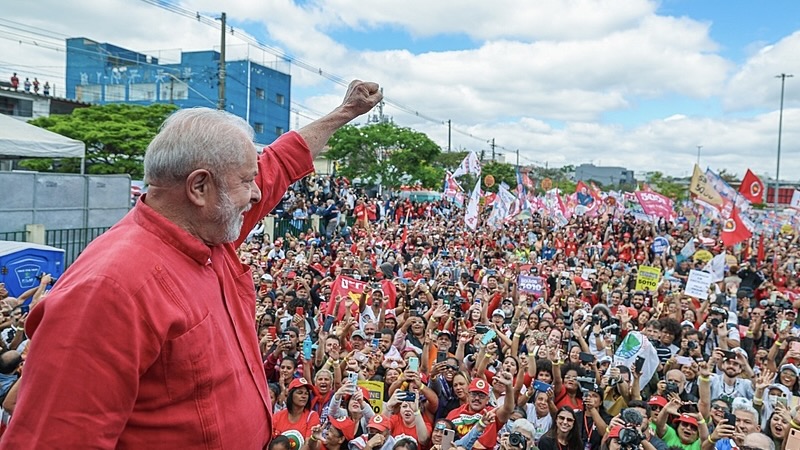 The latest voter intention poll released by Ipec on Monday September 26 indicates that former President Luiz Inácio Lula da Silva of the Workers’ Party of Brazil (PT) has increased by one percentage point and he now has 48% of total voting intentions in the stimulated survey (when the names of the candidates are presented). The sum of the votes for all the other candidates is 44%. The poll indicates that Lula has a possibility of winning in the first round.

Further, the poll indicated that in valid votes, after deducting blank and spoiled ballots, Lula has 52% of the voting intentions.

Following Lula, Jair Bolsonaro (PL) has 31%, Ciro Gomes (PDT) has 6% and Simone Tebet (MDB) has 5%. Soraya Thronicke (União Brasil) and Felipe D’Ávila have 1%. The other candidates do not score. The margin of error is two points higher or lower.

In the previous survey, published last Monday September 19, Lula had 47%, followed by Bolsonaro 31%, Ciro 7%, and Tebet 4%. The others totaled 1% each or less. The sum of the votes of all the opponents, 44%, was lower than Lula’s declared intention to vote, and the difference was within the margin of error, that is: there was uncertainty about the need or not for a second round.

The survey interviewed 3,008 people between September 25 and 26. The margin of error is two percentage points higher or lower, considering a confidence level of 95%. The survey was registered with the TSE under number BR-01640/2022.

With less than a week to go until the first round of the election that will define the next president of the Republic, at least 11 electoral polls are scheduled for the next few days.

A survey conducted by Brasil de Fato at the end of last week shows that Lula’s lead has grown numerically in the last nine nationally relevant polls. On Saturday, an Ipespe/Abrapel poll and, on Monday (26), the FSB/BTG poll added to the statistics.

There are now 11 consecutive polls showing Lula’s distance to Bolsonaro growing in the final stretch of the electoral campaign before the first round of the presidential election.