The Brazilian news agency reported that Lula da Silva’s inauguration as the new president on January 1 for a historic third term amidst a carnival-like backdrop was attended by over five dozen foreign delegations, composed of heads of government, vice-presidents, foreign ministers, special envoys and representatives of international organizations. It was the largest event with high-level international figures in Brazil since the Rio 2016 Olympic Games.

The BRICS (Brazil, Russia, India, China, South Africa) leaders flocked to Brasilia — the vice-presidents of China and Russia and the foreign minister of South Africa. The solitary exception was India. External Affairs Minister S. Jaishankar prioritized a tour of the beautiful Mediterranean island of Cyprus and Austria.

India’s “under-representation” probably was due to the close equations between Prime Minister Narendra Modi and Jair Bolsonaro, who served as the 38th President of Brazil from 2019 until 2022, whom Lula defeated. For some strange reason, the Modi government invested heavily in Bolsonaro by inviting him as the chief guest at India’s Republic Day in January 2020.

It was a controversial decision, given Bolsonaro’s obnoxious record on misogyny and homophobia, and his perversion for targeting the indigenous people. In a scandalous incident, he once told an opposition politician Maria do Rosario during a debate in Parliament, “I wouldn’t rape you because you’re not worthy of it.”

Later, he explained that he wouldn’t rape her because she was “ugly”. Bolsonaro’s misogyny surged when he once remarked “I have five children. Four are men, and then in a moment of weakness the fifth came out a girl.” Again, his homophobic views got the better of him when he threatened that “if I see two men kissing each other on the street, I’ll beat them up.”

Indeed, it remains a mystery what attracted the Indian ruling elite to Bolsonaro, and ex-military officer. Maybe, his “strong man” image and fascist ideology?

Be that as it may, ignoring Lula’s historic return to power in Brazil is incomprehensible. It is not only that he’s, arguably, the most charismatic statesman from a developing country, but he is certain to steer the BRICS to a higher destiny during his four-year term.

Lula’s return comes at a juncture when the BRICS is going from introvert to extrovert and its greater global ambition raises hopes across the wide expanses of the Global South of material changes in the global economic system. The ongoing polarization between the West and the Rest over Ukraine issue accentuates the trend.

The hallmark of China’s BRICS chairmanship in 2022 has been the launching of the extended BRICS+ meeting at the level of foreign ministers. China also has plans to open up the possibility of developing countries joining the core BRICS grouping. In fact, Algeria, Argentina and Iran have already applied to join BRICS, while Saudi Arabia, Turkey and Egypt have announced their interest in becoming the group’s members.

Looking ahead, the vitality in the BRICS trajectory will largely depend on the success of the BRICS+ enterprise. While an inert, introvert BRICS has neither global capacity nor global mission,  a stronger, more inclusive and open BRICS has the potential to become the basis for a new system of global governance. This is the crux of the matter.

To be sure, the BRICS association needs to overcome its mounting internal contradictions. On the one hand, a fundamental transformation of the globalization process has begun (and this process is only gaining momentum) and there are calls for the basic principles and mechanisms which bring the BRICS countries together to undergo reform. On the other hand, this is also an inflection point as multipolarity gains traction and all global multilateral organizations are faced with the loss of their status as universal platforms for overseeing the global rules of the game.

India faces an acute problem of self-identification, since it notionally advocates the transformation of global mechanisms imposed by developed countries but also happens to be a votary of the so-called “rules-based order,” which is a metaphor for the political ideology of the US as the dominant state and “lone superpower” in the 1990s.

Indeed, the difficulties of the BRICS were also caused by internal reasons. BRICS became internally highly heterogeneous and the main reason for this is India’s unwillingness to work with China as leaders of economic growth. To be sure, the aggravation of contradictions between China and India has led to a slowdown in active work in the BRICS.

Enter Brazil. The victory of Bolsonaro in 2018 would also have been a moment of risk for the BRICS, as the new elites in power in Brasilia made no secret of their desire to place their main stake on rapprochement with the US. Surely, India saw in Bolsonaro a “natural ally” within the BRICS, which largely explains the high honor Modi bestowed on him on 2020 Republic Day.

Bolsonaro, like Modi, felt no commitment to the idea of uniting the Global South under the banner of reshaping the world order. Both preferred pragmatic, technocratic areas as the BRICS agenda that are objectively beneficial to them (eg., technological cooperation, the fight against organized crime, digitalization, the Development Bank and so on) although this resulted in an atrophy of the raison d’être of the BRICS agenda.

But, as luck would have it, Joe Biden’s victory in the 2020 US election led to a cooling of  enthusiasm on the part of Bolsonaro and the Brazilian elites regarding the prospects for rapprochement with the US. The apple of discord was Bolsonaro’s policy toward the Amazon River.

Bolsonaro worried about the inclusion of environmental issues in the NATO (North Atlantic Treaty Organization) agenda and he discarded his previously restrained approach to the BRICS, recognizing its importance as a tool to counter isolation in the event of worsening relations with the US and the EU.

Suffice it to say that Lula’s return is happening at a defining moment. In his first remarks after assuming power on Sunday, Lula vowed a drastic change of course to rescue his nation plagued by hunger, poverty and racism.

Lula made clear his main focus would be on ending hunger and narrowing rampant inequality. He also said he aims to improve the rights of women, and attack racism and Brazil’s legacy of slavery.  Lula declared that social conscience will be “the hallmark of our government.”

Unsurprisingly, India feels uneasy that the center of gravity in BRICS is poised to shift to the left of center. Equally, India will find it difficult to maintain its role as a regional leader with the entry of Egypt, Turkey, Iran, Saudi Arabia and Indonesia into the portals of BRICS. Being an acolyte of the US-led “rules-based order,” India faces the specter of isolation.

Beijing, whose approaches to diplomacy and international politics are known for their strategic vision for the long term, is biding its time. Lula told Chinese vice-president Wang Qishan who participated in the ceremony in Brasilia as Xi Jinping’s special representative, that he looked forward to visiting Beijing “to further deepen bilateral practical cooperation in various fields, enhance friendship between peoples, and lift Brazil-China relations to a new level.” 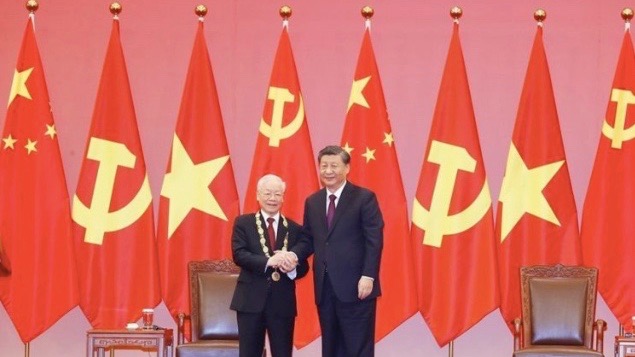