A study published this month found that popular international fashion brands with factories in Bangladesh were involved in multiple “unfair practices,” such as paying suppliers below the cost of production, which had an impact on workers and their livelihoods.

The study conducted by Aberdeen University and advocacy group Transform Trade, titled ‘Impact of Global Clothing Retailers’ Unfair Practices on Bangladeshi Suppliers During COVID-19,’ was based on the survey of 1,000 Bangladeshi factories that manufacture garments for international fashion firms. It found that these factories were facing rising costs for raw materials, and nearly one in five struggled to pay the Bangladeshi minimum wage of £2.30 per day.

Professor Pamela Abbott, co-investigator of the study and director of the Center for Global Development at the University of Aberdeen, claimed that fashion brands were extracting their wealth from some of the world’s poorest countries, a form of 21st century neo-colonialism.

Of the total 1,138 brands and retailers named by the respondents of the survey, nearly 37% have reportedly “engaged in unfair practices.” Some of these include: GAP, Zara, H&M, J.C. Penny, Primark, among others.

More than 51% of the clothing factories surveyed also reported one out of four unfair practices – including “order cancellations, refusal to pay, price reductions, or delayed payment” for goods. “Such unfair trading practices impacted suppliers’ employment practices resulting in worker turnover, loss of jobs and lower wages,” the study said.

The study notes that the ready-made garment industry is Bangladesh’s single biggest economic sector, accounting for 83% of the country’s total export earnings. The industry accounts for about 20% of the country’s gross domestic production (GDP) and employs around four million workers (who make up about 43% of workers in the formal sector, and half of whom are migrants from rural areas).

The study, carried out in December 2021, recommended that the authorities along with Bangladeshi suppliers’ associations advocate for a “cross-border mechanism to stop unfair purchasing” practices by international brands and retailers. It highlighted that if retailers breach any previously arranged terms or fail to pay the agreed amounts, the consequences are faced by the workers, who suffer the most in the inefficient supply chain.

“Because of the unequal power dynamic between the suppliers and buyers, none of the suppliers who reported illegal contract breaches in the survey took legal action to recoup their losses,” Abbott reported.

According to estimates, over 12 million people are dependent on the sector, and it is these individuals who bear the brunt of unfair labor practices and structural exploitation.

Great video highlighting the key findings from our report.

The study claimed that “26% of workers lost their jobs during the early period of the pandemic with no financial compensation (April-June 2020). From June 2020 to December 2021, employment increased by 23 percentage points, but many former workers were not re-employed. When they were, they generally had to sign new contracts.”

The manufacturing industry has seen exponential growth in previous years, but at the cost of compromised rights of garment workers, unions claim. A large number of workers face inhumane working conditions, low and delayed wages, and neglect of labor welfare.

Dilapidated workplaces inside Bangladesh’s garment factories have drawn increased international attention following massive tragedies like the Ashulia Tazreen Fashion factory fire in 2012 and the collapse of the Rana Plaza factory in 2013. Over 1,200 workers were killed and several hundreds severely injured in these two industrial accidents. Workers have since embarked on campaigns for justice and compensation.

According to the Garment Manufacturers and Exporters Associations, following the lockdown in the country, around $2.9 billion worth of exports were canceled or suspended, affecting the livelihood of millions of garment workers.

Meanwhile, the war in Ukraine has softened the demand for lower-priced fashion. Workers in Bangladesh are facing high inflation—the inflation rate in Bangladesh crossed 8% in 2022—and widespread layoffs (one million garment workers were fired or furloughed due to cancellations of orders in 2020). Manufacturers have also faced pressures from brands to keep prices steady year-on-year. 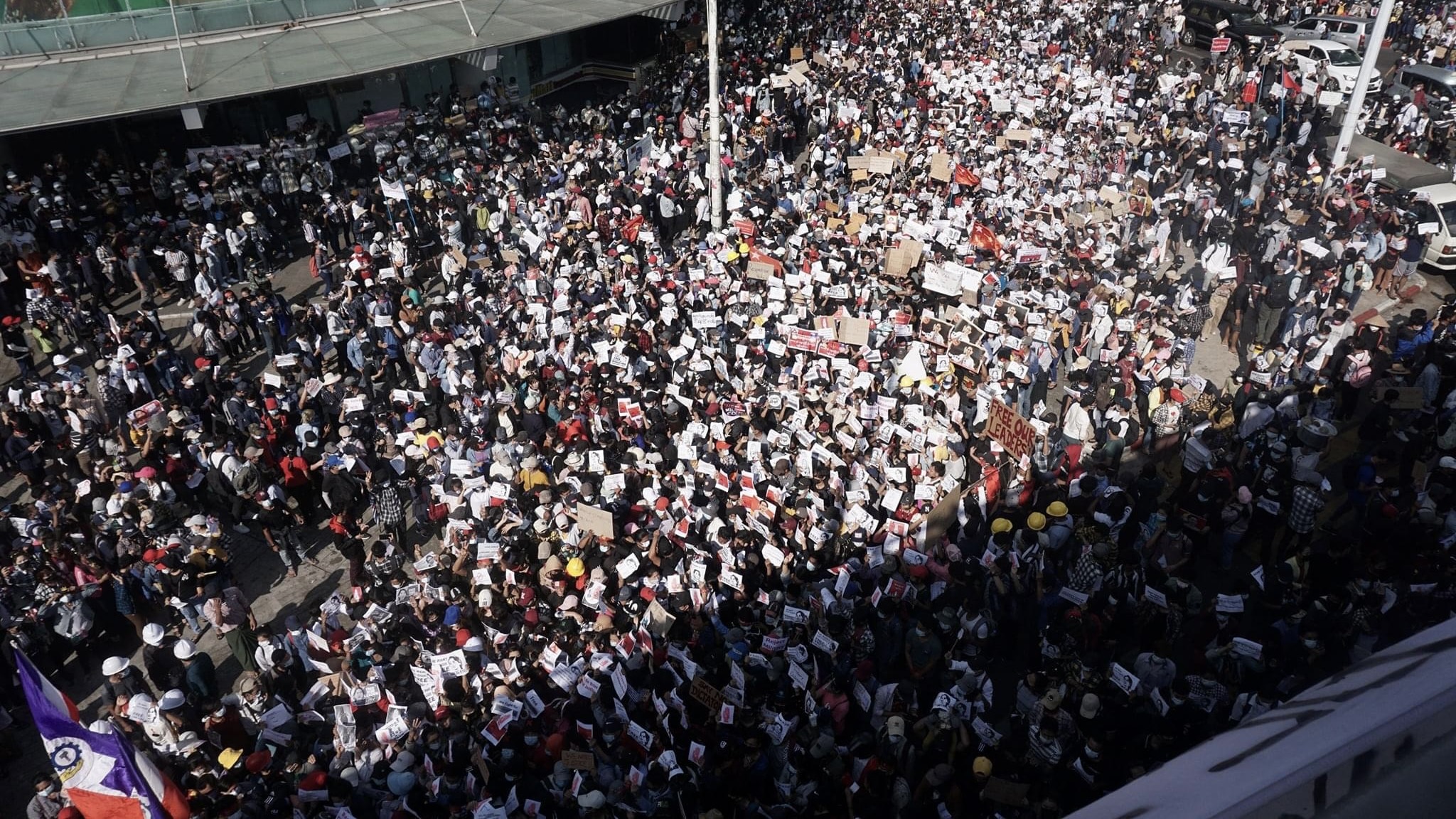 Two years after the coup, the people of Myanmar continue to suffer