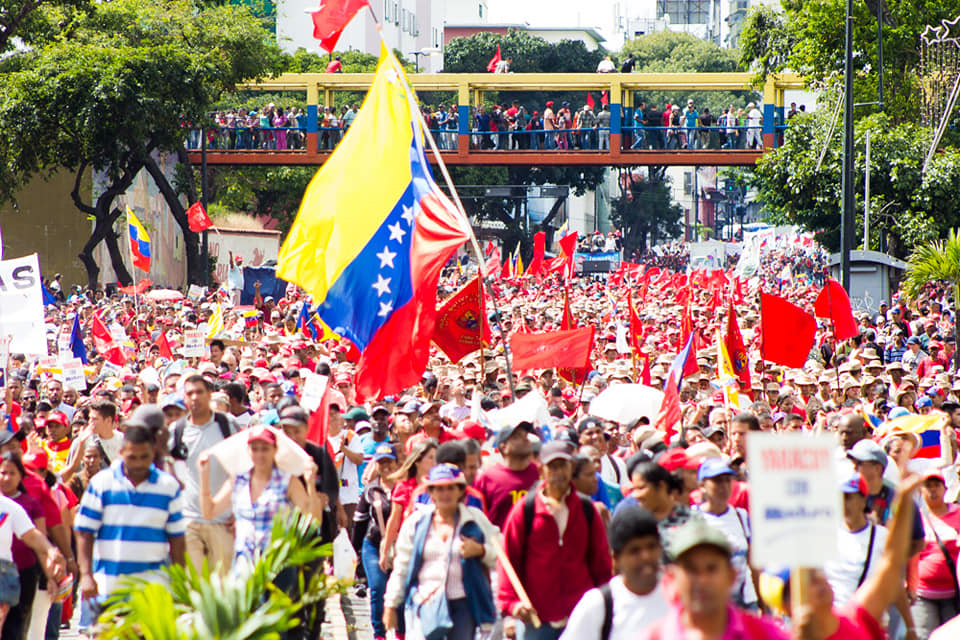 Thousands took the streets on January 23 in Caracas in support of the revolution. Photo: ALBA TV

Juan Guaidó, a member of the Venezuelan National Assembly, declared himself president of Venezuela on Wednesday morning January 23 and called for a transition government. Though Guaidó enjoys support from sectors of the opposition and most importantly from the United States government, his unilateral declaration was largely rejected by Venezuelans and the international community.

Following Guaidó’s declaration, President of the US Donald Trump, Vice-President Mike Pence and Secretary of State Mike Pompeo all pledged their support to Guaidó and called on other nations to join the US in embracing the self-appointed president.

The move by Guaidó has been considered by many, as another step in the efforts by the Venezuelan far-right, the US government and conservative Latin American countries, known as the Lima Group, to take democratically elected Maduro, and as such the political project of the Bolivarian Revolution, out of office by any means necessary.

On Thursday January 24, the National Bolivarian Armed Forces ratified their support for President Nicolás Maduro and rejected the illegal actions which seek to install a parallel government in Venezuela. “The National Bolivarian Armed Forces, faithful to its traditions inherited from the Liberator Simón Bolívar, will never accept a president imposed in the shadows of dark interests nor self-proclaimed outside of the law. It will never subordinate to a foreign power or a government that is not democratically elected by the Venezuelan people.”

Over 70 prominent academics mostly from the United States released a statement condemning the actions of their government: “The United States government must cease interfering in Venezuela’s internal politics, especially for the purpose of overthrowing the country’s government. Actions by the Trump administration and its allies in the hemisphere are almost certain to make the situation in Venezuela worse, leading to unnecessary human suffering, violence, and instability.”

CODEPINK co-founder Medea Benjamin disrupted a meeting of the Organization of American States (OAS) on Thursday in Washington D.C. to protest the support of the US government to the coup in Venezuela. She declared: “Pompeo and the OAS should not be orchestrating a coup in Venezuela. The U.S. has a long and sordid history of supporting coups in Latin America and they always turned out horrible for the people. Look at Guatemala in 53’ and Chile in 73’, as well as Honduras today.”

No coup in Venezuela! #HandsOffVenezuela

The US and its allies have been fomenting the far-right and often violent opposition to chavismo and the Bolivarian Revolution since the revolution triumphed in 1999, but in the past several years the pressure has increased and they perfected their tactics. In 2015, the economic blockade or better referred to as siege began under the order of Barack Obama when he declared Venezuela a “threat to national security” and unleashed the first of what would be many economic sanctions.

The economic sanctions have brought the nation to the brink of crisis, causing shortages in basic goods, millions of dollars lost in economic transactions and weakening of their petroleum industry and capacity, all of which has deep impacts on the day to day realities of the Venezuelan people.

In spite of the challenges, the people of Venezuela have consistently shown that they choose Chavismo and the Bolivarian Revolution, that within this political project the possibility exists to advance towards socialism, to maintain sovereignty over the vast natural resources, to use the wealth of the country for the advancement and well-being of the people and not for the benefit of a few.

Marco Teruggi, an Argentine sociologist and journalist who has lived in Venezuela for the past five years explained, “The Revolution is much more than a dimension of the Government and the right-wing denies this. It is a dimension of conscience, participation, mobilization and people’s organization. Before the Revolution there was nothing for the poor, the majority. The one moment in history for the people who were condemned to never be it, but became the protagonists of their communities was with the Revolution. The people know that their only possibility is tied to the Revolution, they don’t [necessarily] defend Maduro, they defend themselves.”

This was evident with the overwhelming victory of Nicolás Maduro in the presidential elections in May 2018 and on Wednesday when thousands of supporters of the Revolution took the streets in a massive show of unity.

The Bolivarian Revolution has also been a beacon of hope for the rest of Latin America and the world, for bravely standing up to imperialism and defending the will of the working-class people. Following Wednesday’s events, declarations of solidarity from people’s movements from across the globe came pouring in, while in several countries people mobilized outside the Venezuelan embassies in solidarity. From Argentina to Costa Rica, Zimbabwe to India, people’s movements have stood firmly in solidarity with the Revolution and the legitimate president, Nicolás Maduro.

The United Food and Allied Workers Union of Zimbabwe (UFAWUZ) denounced the “onslaught of the Bolivarian Revolution by the imperialist led by United States of America President Donald Trump and the other imperialist puppets in the LIMA Group” and declared that “the Venezuelan people have the right to self determination, choose their leaders and protect their interests without the uninvited interference by USA.” They also called on the working class of the world to intensify the struggles against imperialism and fascism.

The Tanzanian Socialist Forum also condemned the attacks on the internal affairs and sovereignty on Venezuela by imperialist forces. They proclaimed that: “We have no doubt in our minds that the Venezuelans are willing and able to defend their revolution. And nobody can contest that fact! They have done that before, whereas similar forces attempted to oust Comandante Hugo Chavez, however the masses of Venezuela overwhelmingly defeated the imperialist forces and their domestic allies. But despite the mighty power and dedication of the people of Venezuela, it is a grave error to remain silent and take the observer role in such a situation.”

The Social Movements of ALBA platform pointed to the gravity of the situation not only for Venezuela but for the whole region: “It is necessary to understand that Venezuela is the entryway that the United States looks for to generate chaos and death in the whole region. Whoever thinks this is only a problem of Maduro, only a problem of chavismo, suffers from serious short-sightedness that could cost the life of millions of people in Our America.”

On a state level, the Revolutionary Government of the Republic of Cuba expressed its solidarity with Venezuela and “condemns and energetically rejects the attempt to impose a coup d’etat, a puppet government at the service of the United States”. They stated that “the true objectives of actions against Venezuela are to control the vast resources of this sister nation and destroy the value of its example, as an emancipatory process defending the dignity and independence of Our America.”

Cuban President Miguel Díaz-Canel Bermúdez said: “the sovereignty of our peoples is expressed today in one’s attitude toward Venezuela: to support the legitimate right of the sister nation to define its own destiny is to defend the dignity of all.”

Evo Morales, President of Bolivia, manifested his solidarity “with the Venezuelan people and brother Nicolás Maduro, in these decisive hours” and put responsibility on the US for “promoting a coup d’etat and fratricidal confrontation between Venezuelans. In democracy, the free people choose their presidents, not the empire. Latin America is a zone of peace and it will defend its sovereignty in the face of imperialist coup-ism” he stated on twitter.

Russia, China, Turkey, Uruguay and Mexico have also declared that they continue to recognize Nicolás Maduro as the legitimate president of Venezuela and have pledged their support to the nation while it engages in internal debates and discussions to confront the internal conflicts.