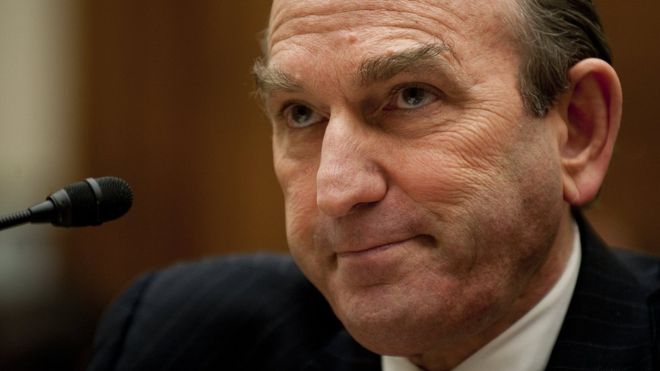 Elliott Abrams, the new special envoy to Venezuela for the United States, is known for playing a key role in regime change operations carried out by the US in the past. (Photo: BBC)

On January 26, the Donald Trump administration appointed Elliott Abrams as the special envoy to Venezuela for the United States. The appointment came as a surprise to many because Abrams was considered to be one of the establishment neo-conservatives within the Republican Party who opposed Trump’s candidacy. He is a veteran who has served in the three previous administrations of Republican presidents, which is why he has had no role in the Trump government until now. However, looking at his record in perspective, his appointment now makes sense.

Elliott Abrams served the administrations of Ronald Reagan, George Bush Sr. and George W. Bush, and is a known war hawk. He aided the respective administrations in engineering coups and facilitating military interventions in the global south. He was deeply involved in facilitating US military support to the Contras in Nicaragua and, in 1991, he was convicted of withholding information from Congress during the investigation on the affair. The scandal of Iran-Contra Affair, as it is known in the US press, was among the most damning indictment of the imperialist foreign policy and the military-industrial complex.

In 1981, when the Iran-Iraq war was at its peak, the Reagan administration decided to secretly sell an assortment of weapons-related supplies to Iran, which later turned into full-fledged arms trade. Israel was the conduit for this weapons trade, since the military embargo imposed by Reagan’s predecessor was still in place. This was despite Reagan’s promise to continue the embargo against Iran, and a more formalized arms deal with Iraq in place. The proceeds of the illegal weapons, which was around USD 30 million, funded the right-wing reactionary militias in Nicaragua, the Contrarrevolucion (counterrevolutionary) or Contras, in short. The Contras were armed with the intention of bringing down the socialist government of Sandinista National Liberation Front (FSLN) led by Daniel Ortega.

The Iran-Contra scandal was exposed in November 1986, after the details of the proceeding were leaked by a senior official in the Islamic Revolutionary Guard, Mehdi Hashmi, through a major Lebanese weekly. Later that month, the Iranian government publicly confirmed the details of the expose. This was followed by a large scale destruction of records and paper trails by the Reagan administration. At least 12 members of the administration were indicted by the US Congress, out of which some, including the then Assistant Secretary of State, Elliott Abrams, were found to be lying under oath. The commission, formed by the Congress to investigate the affair, convicted around six of them, including Abrams, and was set to investigate the roles of Reagan and his vice-president, also later president, George H. W. Bush. In 1992, before leaving office, Bush Sr. pardoned the convicted senior government officials.

Abrams made a comeback later under George W. Bush, who succeeded Bill Clinton in 2001. His reappointment into the US administration as a Special Assistant attracted protests from both Democratic and Republican parties as well as several human rights groups.

On April 11, 2002, Pedro Carmona, leader of a business union representing the Venezuelan oligarchy (Fedecamaras) along with opposition parties and supporters from within the military, staged a coup d’etat against the Bolivarian government of president Hugo Chavez.

The coup organizers forged a resignation, apparently signed by Chavez, and declared Carmona as the ‘interim president’. Supporters of Chavez-led Fifth Republic Movement and those from the Bolivarian Circles, along with supporters from within the military, foiled the coup by the end of the day, reinstated Chavez back to the presidential office and forced Carmona into exile. Later that month, British weekly, The Observer, brought forth connections between Pedro Carmona and the Bush administration, citing sources from within the Organization of American States (OAS). Apparently, the Bush Jr. administration conducted several meetings through Otto Reich and Elliott Abrams over months, until a few weeks before the coup attempt. While the US denied any involvement, sources from within the OAS stated that not only were they planning the coup but it was Abrams who ‘gave the nod’.

After viewing Abram’s role in pushing forward US interventionist politics for the past several decades, it seems quite logical that the Trump administration would appoint him to do their dirty deed in Venezuela. The appointment of Abrams is an obvious admission of the intentions of the US, of undermining the sovereignty and integrity of Venezuela. Unlike the 2002 coup, the Trump administration is overtly supporting the current attack on the Bolivarian government, led by Nicolas Maduro, from the reactionaries in the ‘opposition’ and the newly formed right-wing governments in the neighbourhood. The Venezuelan foreign minister, Jorge Arreaza, at the United Nations Security Council meeting on the crisis said, “the United States is not behind the coup d’etat, but in the front of it”.