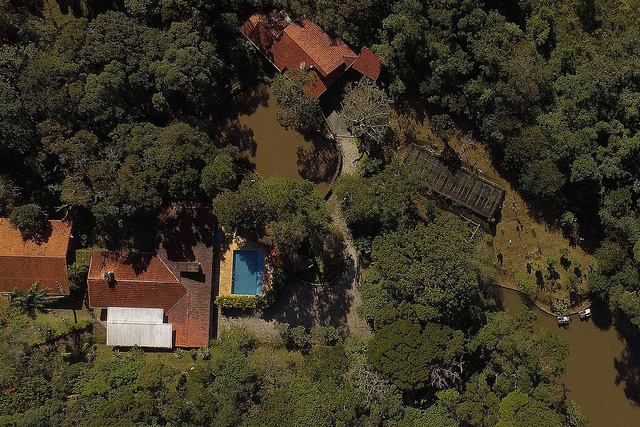 Aerial view of the property in Atibaia, São Paulo, owned by the Bittar family / Handout

Lula’s defense argues that the ruling by judge Gabriela Hardt – who replaced the now Justice minister Sergio Moro – is essentially based on the testimony of Leo Pinheiro, the former CEO of construction company OAS, who started to cooperate with the prosecution after a plea-bargain agreement. Meanwhile, higher courts in the country have been setting precedents in which such testimonies by plea-bargaining parties against defendants are not enough to secure a conviction.

“There is no evidence,” Lula’s Manoel Caetano told TV 247 in Curitiba. “Their goal is to keep Lula in prison.”

A former Justice minister who is collaborating with the ex-president’s defense, Eugênio Aragão said that it’s a lawfare against Lula, and this is why it is unlikely that he will get a positive outcome.

“A positive outcome in Lula’s case would be political, not legal. The accusation and conviction against him are political. Not necessarily partisan, but they [prosecution and court system] are part of a corporate project,” Aragão argued.

After judge Gabriela Hardt’s ruling against ex-president Lula on Wednesday, outrage took over the hearts of many Brazilians, both for the inconsistencies in the case and the blatantly political nature of his conviction.

Demonstrators are staging protests in several parts of the country, including Porto Alegre, São Paulo, Curitiba, and Cuiabá, in support of the left-wing leader.

The charges against Lula are the same as in the Guarujá case, for which he is serving a 12-year prison sentence since April 2018. The inconsistencies in both cases are also similar.

Brasil de Fato had access to the files of the process and found a series of weaknesses, all addressed in the defense’s argument.

To prove the crime of corruption by a public officer, the accusation would have to prove that the servant received some kind of perk from the briber and took measures in office in exchange for these benefits, but this information is not included in the sentence.

The accusation claims that the construction companies OAS, Schahin, and Odebrecht allegedly paid for renovations in the property in exchange for contracts with Brazil’s oil giant Petrobras – and that the former president moved to favor them in these contracts. Lula is accused of receiving estimated R$920,000 (roughly US$250,000 in today’s value) through these renovations in the property.

During the process, Lula’s defense argued that, while the ex-president did visit the property, he did not benefit from the renovations. Even the Federal Prosecution Service’s 168-page files do not specifically establish what those benefits would be.

The alleged money-laundering allegations also lack grounds, as there was no proof that Lula actually owned the estate. The property is registered in the name of businessman Fernando Bittar, who the prosecution argued was just a “straw man” to hide that Lula is the owner of the property.

Bittar officially co-owns the country house in Atibaia with his partner Jonas Suassuna. His sister, Priscila Bittar, testified that her father and Lula’s decades-long friend, Jacó Bittar, gave the money to buy the rural property in 2010, all aboveboard. Jacó had received the money as damages because he was punished during Brazil’s military regime for being a union leader. “He wanted a country house so that everyone could have a place to go and spend time together,” Priscila said. When Lula had cancer in 2012, the family offered him the house, where he spent a lot of time during the treatment.

Jacó, who met Lula in 1978 and helped him found the Workers’ Party in the early 1980s, said that the former president talked to him in 2014 about possibly buying the property, because he was embarrassed to spend more time there than the Bittar family. He didn’t accept the offer and told his son he should only sell it if needed – in which case, Lula would be a “preferred buyer.”

But Sergio Moro, the Car Wash judge who became Jair Bolsonaro’s Justice minister in the newly assumed far-right government, decided not to allow Jacó’s testimony, claiming “doubtful relevance” and “humanitarian reasons” due to his health conditions as a 78-year-old struggling with Parkinson’s.

But Aragão says Moro’s humanitarian tendencies seem self-serving, as he was not so humanitarian when it came to accusations against Lula’s deceased wife, Marisa Letícia. “It sounds like a jest,” the former Justice minister said.

The prosecution also argues the police found Lula and his family’s personal belongings at the property, such as underwear and two paddle boats.

“I visited it [the Atibaia property] because the owner allowed me to,” Lula told judge Hardt in November during a deposition. What personal belongings did I have there? Underwear? Sleepwear? Those are things I take anywhere I go. No business executive can claim it’s my property when it’s not,” he continued, referring to the plea-bargaining OAS executive Leo Pinheiro.