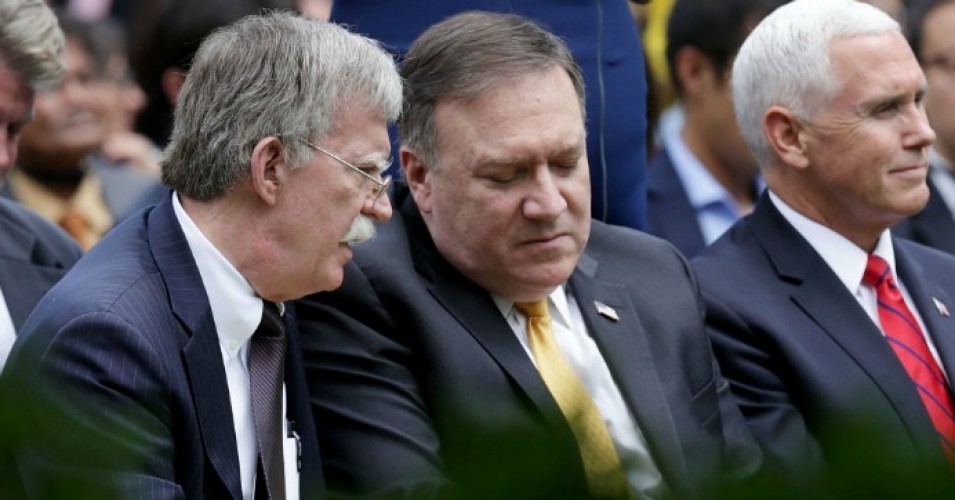 Since 1998, the United States of America has tried to overthrow the government of Venezuela. What threatened the government of the United States since then was the Bolivarian dynamic set in motion by the election of Hugo Chávez as president of Venezuela that year. Chávez won the elections with a mandate from Venezuela’s workers and poor to overhaul the country to tend to their long-neglected needs.

Venezuela, with the world’s largest proven oil reserves, had enriched the U.S.-based oil companies and its own oligarchy. Venezuela’s key oil minister in the early 1960s (and architect of OPEC—the Organization of Petroleum Exporting Countries) Juan Pablo Pérez Alfonso rightly called oil the “devil’s excrement.” It promised so much and delivered so little. Chávez arrived as the embodiment of popular hope. He threatened the oil companies and the oligarchy, which is why the United States tried to overthrow him.

The first attempt at a coup came in 2002, when the United States egged on the military and the oligarchy to overthrow Chávez. They failed. He was supremely popular, the Chavista base eager for change that would improve their lives. They had no faith in the United States or the oligarchy, both of whom had suffocated them for the past century.

Never has the Monroe Doctrine—which the United States invoked to control the American hemisphere—done much good for the millions of people from the southern tip of Argentina to the northern reaches of Canada. It has helped along the big corporations and the oligarchs, but not the ordinary people—the base of the Chavistas.

The residue of that base lined up this Sunday to sign a pledge in public against a new U.S. diplomatic and military intervention, against economic war.

What drives the United States to persist in its interventions—diplomatic, economic and military—against the Venezuelan government?

Is the United States of America motivated by humanitarian concerns? If it were so, why did the United States attempt to overthrow Chávez’s government in 2002, when there was no problem with Venezuela’s finances? Why has the United States tried to push policies for all of Latin America—such as the Free Trade Area of the Americas (FTAA)—that have been clearly shown to increase suffering for the people?

A logical person would look at these U.S. initiatives—the attempted U.S. coup in 2002 and the FTAA—and conclude that the U.S. government has more concern for corporate interests than for the interests of the poor. After all, what bothered the United States with Chávez was that he demanded that oil companies pay higher royalties for the oil that they sucked out of Venezuela. Such audacity has to be repaid with a coup attempt.

It is what happened in 1953 to Mohammed Mossadeq of Iran and in 1954 to Jacobo Árbenz of Guatemala and in 1971 to Salvador Allende of Chile. You cross U.S. multinational corporations, and you get overthrown.

Here’s a quick way to end the humanitarian crisis: stop trying to destabilize Venezuela, end the economic war and allow Venezuela to manage its external revenues. If all this is done, Venezuela’s government should be able to import goods and use its resources to continue the process of diversifying its economy. But this is not what the United States wants.

Evidence from the past century of U.S. interventions overseas suggests that the United States likes to use the word “democracy” to push its own agenda. Chávez was elected several times, his policies ratified by the people in several referenda. Nicolás Maduro asked the United Nations and external monitors to come to Venezuela and observe last year’s election. The United States pressured these agencies not to go. The right-wing opposition lost the election because they could not come together around a credible candidate—and they have no platform to go to the people.

Even with the chaos in the camp of the right, the right won 33 percent of the vote. Rather than try to appeal to more people on a political basis—the path of democratic politics, in other words—the right has taken cover behind the United States Treasury Department and the U.S. military, with the Canadians in the wings. This is hardly a good way to move a democratic agenda.

What does the United States mean by the promotion of democracy? It is worthwhile to allow U.S. Ambassador William Brownfield to explain the process himself. In November 2006, Brownfield sent a cable to Washington with this five-point strategy (which had been worked out in August 2004):

This is blatant U.S. interference in Venezuelan politics. The first point—strengthening democratic institutions—is the most Orwellian of them all. The U.S. government—via its agencies such as USAID and the National Endowment for Democracy as well as the CIA—has been funding a series of “civil society” groups to challenge the legitimacy of the Venezuelan electoral process.

A vote monitoring group—Súmate—was used to challenge each election, while groups were funded to take to the streets. In 2009, unrest of the streets—the U.S. State Department admitted—was funded by its agencies. Eduardo Fernandez of Development Alternatives Incorporated (DAI) said that “the streets are hot” and that “all these people” who have organized the protest “are our grantees.” So much for democracy promotion.

Venezuela has the world’s largest proven oil reserves. No question that the oil companies have long wanted to return to the days when they called the shots in Caracas. When Chávez increased Venezuela’s share of the profits, he threatened a broader challenge to the oil firms. They have long wanted to punish the Bolivarian experiment for its audacity.

But there is no immediate need to take the oil. The world currently faces a glut of oil production, with Saudi Arabia running its wells at full tilt and the United States able to produce more oil than previously.

Low oil prices combined with currency problems within Venezuela has provided the United States with a unique opportunity to challenge Maduro’s government. The atmosphere for regime change was improved when Jair Bolsonaro came to power in Brazil, and when Canada and the dozen Latin American leaders were willing to create the Lima Group to push to overthrow the Maduro government.

That document opens with a declaration of U.S. power—“The United States possesses unprecedented—and unequalled—strength and influence in the world.” No question that the United States has the largest and most powerful military, “strong enough to dissuade potential adversaries from pursuing a military build-up in the hopes of surpassing, or equally, the power of the United States.”

Key here is the idea that the United States must be the most powerful country in the world and that no one will be allowed to threaten this power militarily or with an alternative economic agenda. Chávez attempted an alternative in Venezuela and, worse for the United States, through the Bolivarian project across Latin America. The Bolivarians understood that there was no hope for their revolution if they remained within their borders. They had to build bridges with their neighbors on a new foundation.

The U.S.-attempted coup in 2002 came to break the political alternative posed by Chávez. Once more, the National Security Strategy is useful. “The United States has long maintained the option of pre-emptive actions to counter a sufficient threat to our national security,” the U.S. government wrote. “The greater the threat, the greater is the risk of inaction—and the more compelling case for taking anticipatory action to defend ourselves. …To forestall or prevent such hostile acts by our adversaries, the United States will, if necessary, act pre-emptively.” Coups are pre-emptive. So is economic warfare.

Greece, under Syriza, offered a mild alternative. It had to be shut down. Coups come these days, said the former Greek finance minister, by banks as much as tanks.

Venezuela, under the Bolivarians, offered a stronger alternative. It has to be shut down. Humanitarian concerns? Democracy? Not so important to the United States. Far more important is to deliver the planet into the hands of the billionaires, to extend the dictatorship of the billionaires over every square inch of the planet.