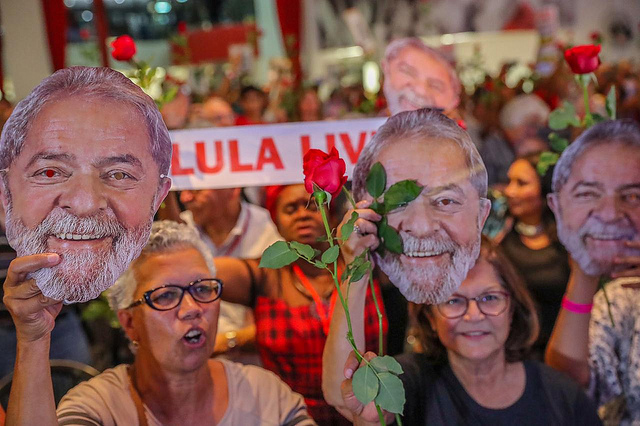 The appeal questions the partiality of former judge Moro, who convicted Lula in July 2017 in a legal process that was widely condemned for its irregularities, as well as the clear political bias against Lula himself. Despite there not being clear evidence or proof to support the prosecutor’s case against Lula, he was slapped with a heavy sentence as part of the Car Wash case. All the while, Brazilian media conjured up a media charade against Lula to rally popular support and influence common sentiment against him with false allegations, fake evidence and information.

The political bias in Lula’s case became clearer when the October 2018 elections came closer. In January 2018, an appeals court upheld the July 2017 ruling and increased the prison time from 9 to 12 years. Then in April, Lula’s petition for habeas corpus was rejected and Sérgio Moro issued an arrest warrant. At the time, Lula was the frontrunner in all of the voter intention polls for the presidential elections and continued to be so even after his imprisonment.

However, in September, the Supreme Electoral Court rejected Lula’s candidacy. The Workers’ Party was forced to field Fernando Haddad as the presidential candidate. Despite a hard-fought battle, the Haddad ticket, with Manuela D’Avila as vice-presidential candidate, was unable to obtain the same level of support as Lula. Extreme-right candidate Jair Bolsonaro was elected president of Brazil and he quickly appointed Moro as minister of justice.

For many, the bias of Moro was clear, he was not an impartial administrator of judge, but a politically motivated power seeker. Lula’s defense team presented the habeas corpus request to disqualify Moro and annul his ruling. Then, a couple weeks ago, their case against Moro was unexpectedly given the smoking gun that it needed.

On June 10, The Intercept published a series of reports based on an exclusive archive of private chats, audio recordings, videos, photos and court proceedings that were given to the outlet by an anonymous source. The reports confirmed the political bias behind the legal persecution of Lula da Silva and revealed that the prosecutors of the “Operation Car Wash” task force and Sérgio Moro himself had a clear political objective: to stop the return of the Workers’ Party to power.

The publication of the reports marked a turning point in Brazilian politics. For those in Brazil and across the world that had applauded and commended the Car Wash task force for bravely tackling corruption in one of the biggest countries in the world, the all-star team’s ruthless case against Lula was suddenly put into question.

The reports managed to impact more than public opinion, Sérgio Moro is also being forced to deal with the legal ramifications of his malpractice. On June 19, Moro had to appear before the Commission of Constitution and Justice of the Brazilian senate and give clarifications about the denouncements related to The Intercept reports. Moro has denied the accusations and said that he needs to see the source.

Gleisi Hoffmann, the president of the Workers’ Party, visited Lula on June 19 at the Federal Police headquarters in Curitiba where he is serving his prison sentence. In an interview with Brasil de Fato she commented on the hypocrisy of Moro, “He is saying that he needs to see the source. He leaked a ton of things, exposing Lula, exposing Dilma, exposing their families. He complains about this?” Hoffmann is confident that the leaks from the reports will be sufficient to prove Moro’s partiality and overturn Lula’s conviction.

Rosane Silva of the National Free Lula Committee said “The denouncements that have come out through the website The Intercept clearly show to Brazilian society that president Lula was politically persecuted by Moro and this farce of Car Wash is being dismantled.”