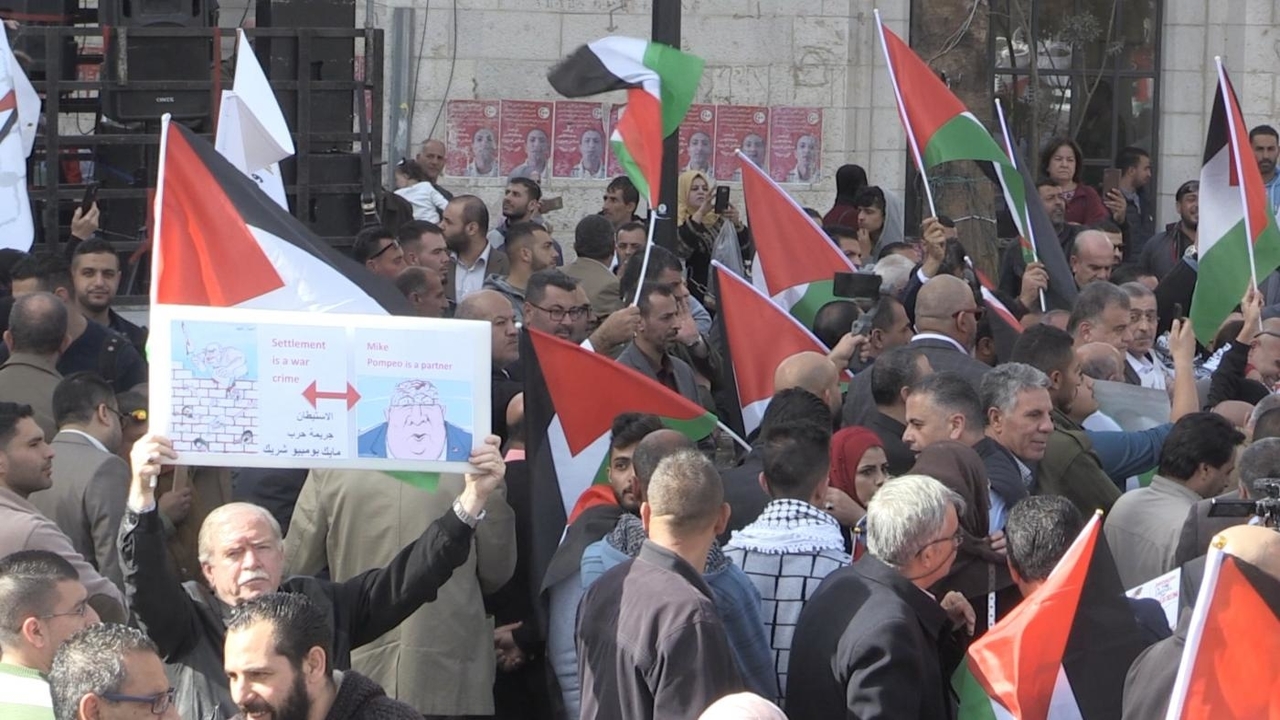 ‘Day of rage’ protest in Ramallah on Sunday, against the US decision to consider Jewish settlements on occupied Palestinian lands as legal. (Photo: Middle East Eye)

Thousands of Palestinians participated in protests across the occupied West Bank on Tuesday, November 26, against the recent US decision to consider the Israeli Jewish settlements on the occupied Palestinian territories (oPT) as ‘not illegal’. The move is in violation of international law.

According to various media reports, protests were held in Ramallah, Bethlehem, Nablus, Jericho, Jenin, Hebron, Tulkarem, Qalqiya, Al-Bireh city, Abu Dis, Beit El and other areas. The Palestinian Red Crescent has reported that 77 people suffered injuries at the hands of the Israeli security forces, most of which have been attributed to the indiscriminate use of rubber-coated steel bullets and tear gas.

Schools, universities and government offices also remained closed as part of the protests, with rallies and demonstrations being held in city centers and town squares across the West Bank. Close to 2,000 people were part of the demonstration in Ramallah, and approximately 3,000 gathered in Birzeit, north of Ramallah, for a protest march by students of Birzeit University. The students marched towards the illegal Israeli settlement of Beit El, which is largely built on usurped land.

Demonstrators were seen holding signs reading, ‘Trump to impeachment, Netanyahu to jail, the occupation will go and we will remain on our land’ and ‘Palestine from the river to the sea. Palestine is ours – Jerusalem is our capital’. In Nablus, the protesters burnt US and Israeli flags, and in Ramallah, an effigy of US president Donald Trump was also set on fire. Effigies of US secretary of state Mike Pompeo and Israeli prime minister Benjamin Netanyahu were lit in Nablus.

Protests were also held in Gaza, where protesters gathered outside the United Nations (UN) office to condemn and reject the US decision. They also registered their protest against the death of Palestinian prisoner Sami Abu Diak, who died in an Israeli hospital yesterday. Abu Diak was suffering from cancer for the last four years. There have been accusations of gross and deliberate medical negligence by the Israeli authorities, who had meted out systematic cruel treatment to the Palestinian, leading to his premature and painful demise.

At least 33 injuries were reported from Al-Bireh city, most of them either through tear gas inhalation or rubber bullet wounds. In addition, 15 cases of injuries have been reported in Bethlehem, 13 in Abu Dis, and one each in Hebron and Tulkarem. 14 people also suffered from tear gas inhalation at the Huwwara checkpoint in Nablus, according to the Palestinian Red Crescent. The ministry of health in Ramallah also reported that two Palestinians in Hebron and five in Ramallah are being treated for rubber bullet wounds in hospitals, along with three others for smoke inhalation, and one suffering from shock.

On November 18, US secretary of state Mike Pompeo announced that the United States would no longer consider the Jewish settlements built by Israel on stolen Palestinian land as illegal. This decision is a violation of international law according to the Fourth Geneva convention. The illegal settling of Jewish enclaves on occupied Palestinian lands is also considered a war crime.