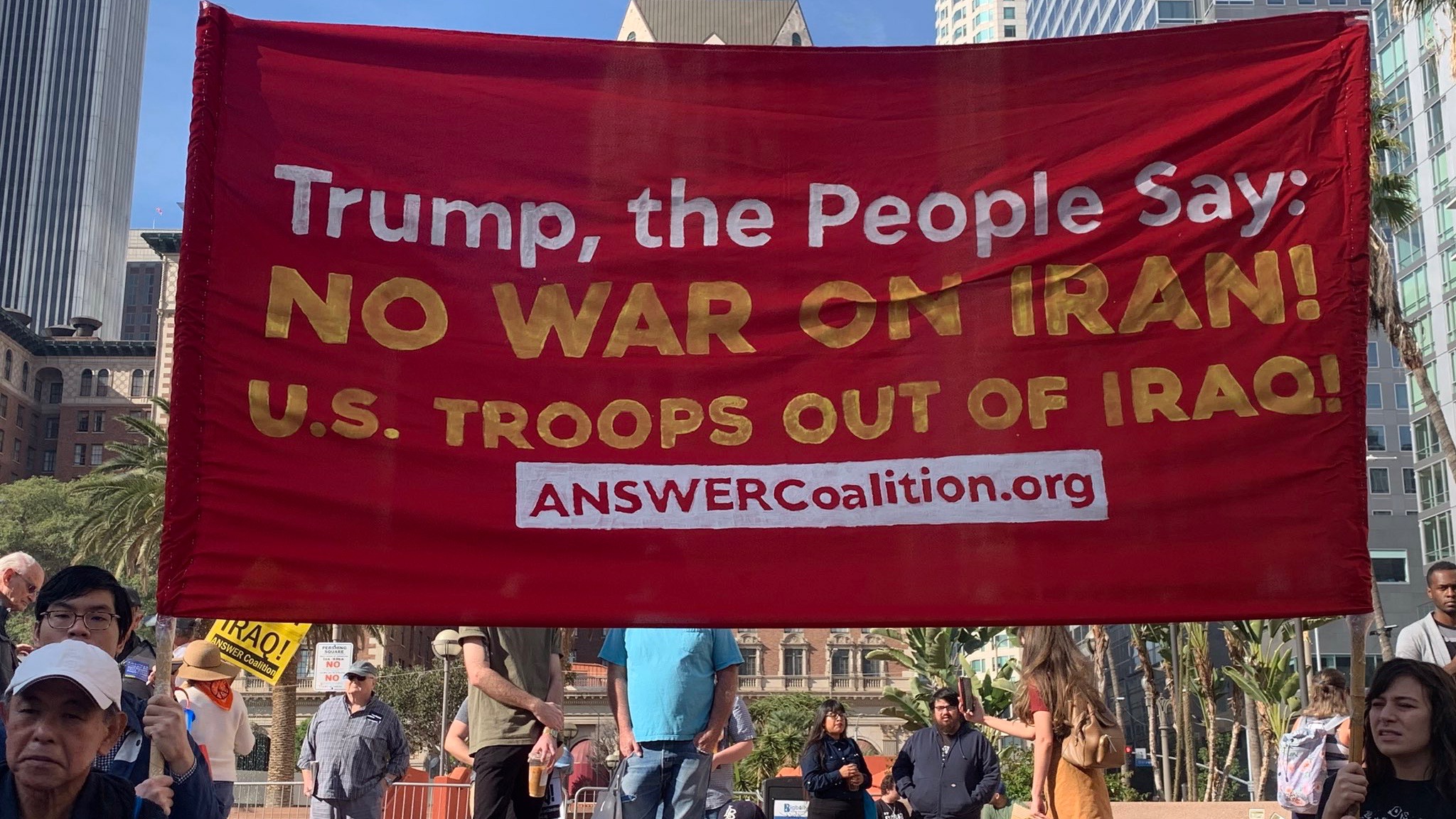 Thousands mobilized across the United States to reject the war-mongering actions of the US and demand peace. Photo: ANSWER Coalition

Anti-war protests were organized in several places in the United States on Saturday, January 4, following the assassination of the head of Iran’s Al- Quds Force, Qassem Soleimani, in an airstrike in Iraq the previous day. The assassination has been widely condemned for bringing the entire West Asia to the brink of war.

While US politicians and media have toed the administration’s line and defended the assassination, pushing the narrative that Soleimani was a threat to national security, progressives and anti-war organizations have spoken out against the action.

A statement released by the ANSWER Coalition (Act Now to Stop War & End Racism) on Friday stated that the “targeted assassination and murder of a central leader of Iran is designed to initiate a new war.” The coalition called for mobilizations, warning that, “unless the people of the United States rise up and stop it, this war will engulf the whole region and could quickly turn into a global conflict of unpredictable scope and potentially the gravest consequences.”

On Saturday, people took to the streets in massive anti-war protests in over 80 US cities. The mobilizations were co-sponsored by anti-war organizations such as the CODEPINK, Popular Resistance, Veterans for Peace, World Beyond War, Black Alliance for Peace, American-Iranian Friendship Committee (AIFC) and dozens more. The protesters sent a strong message to the US government and the world that the American people want peace and an end to the country’s military presence in West Asia.

No justice, no peace! U.S. out of the Middle East! pic.twitter.com/4rBQHbwe83

NYC now: They say more war, we say no war! US out of the Middle East! #NoWarInIran pic.twitter.com/mu3NtcAGSZ

US senator and Democratic Party presidential candidate Senator Bernie Sanders has taken a firm stance against the aggression against Iran  and has already stated that he intends to work towards preventing a war. “When I return to Washington (DC) next week… I believe the first course of action is for the Congress to take immediate steps to restrain president Trump from plunging our nation into yet another endless war,” said Sanders. On Twitter, he added, “We must do more than just stop war with Iran. We must firmly commit to ending U.S. military presence in the Middle East in an orderly manner. We must end our involvement in the Saudi-led intervention in Yemen. We must bring our troops home from Afghanistan.”

Other US politicians like Rashida Tlaib, Ilhan Omar and Alexandria Ocasio-Cortez have also strongly opposed Trump’s warmongering. Ocasio-Cortez pointed out that children of the billionaires are not going to be in the line of fire when a war erupts. “War is a class conflict, too,” Ocasio-Cortez said in her tweet in support of Sanders’ speech. “The rich and powerful who open war escape the consequences of their decisions. It’s not their children sent into the jaws of violence,” she added.

Outside of the US too, people are also on high alert. Shabbir Lakha of People’s Assembly Against Austerity in the United Kingdom called for a mass movement against any attempt at war with Iran. “This escalation hasn’t come from nowhere,” Lakha wrote in a statement for Stop The War Coalition (StWC), adding that “it is simply the latest in an ongoing campaign of hybrid warfare by the US and its allies against Iran in the Middle East.”

Lindsey German, convenor of the StWC, echoed these sentiments when talking to Andrew Castle of the LBC where she characterized the assassination as “deliberate, illegal, reckless”. In her statement released immediately after the assassination, for the StWC, she stated that “we must do everything we can to oppose war with Iran – and attacks on Iraq if it demands the withdrawal of US troops.”

Opposition leader Jeremy Corbyn called the US a “belligerent” in the light of the attack and has asked the government and the people to stand up against it. The UK has been a key military ally in all the recent US and NATO wars on the Global South

In India, major leftist parties have strongly condemned the assassination. The Communist Party of India (Marxist) has released a statement, calling the attack and act of “international banditry”. Pointing out that the war “have incalculable consequences” the CPI (M) stated that “the United States will be responsible for any conflict and violence that ensues.” The Communist Party of India (Marxist-Leninist) Liberation also condemned the attack and expressed solidarity with the people of Iran and Iraq.