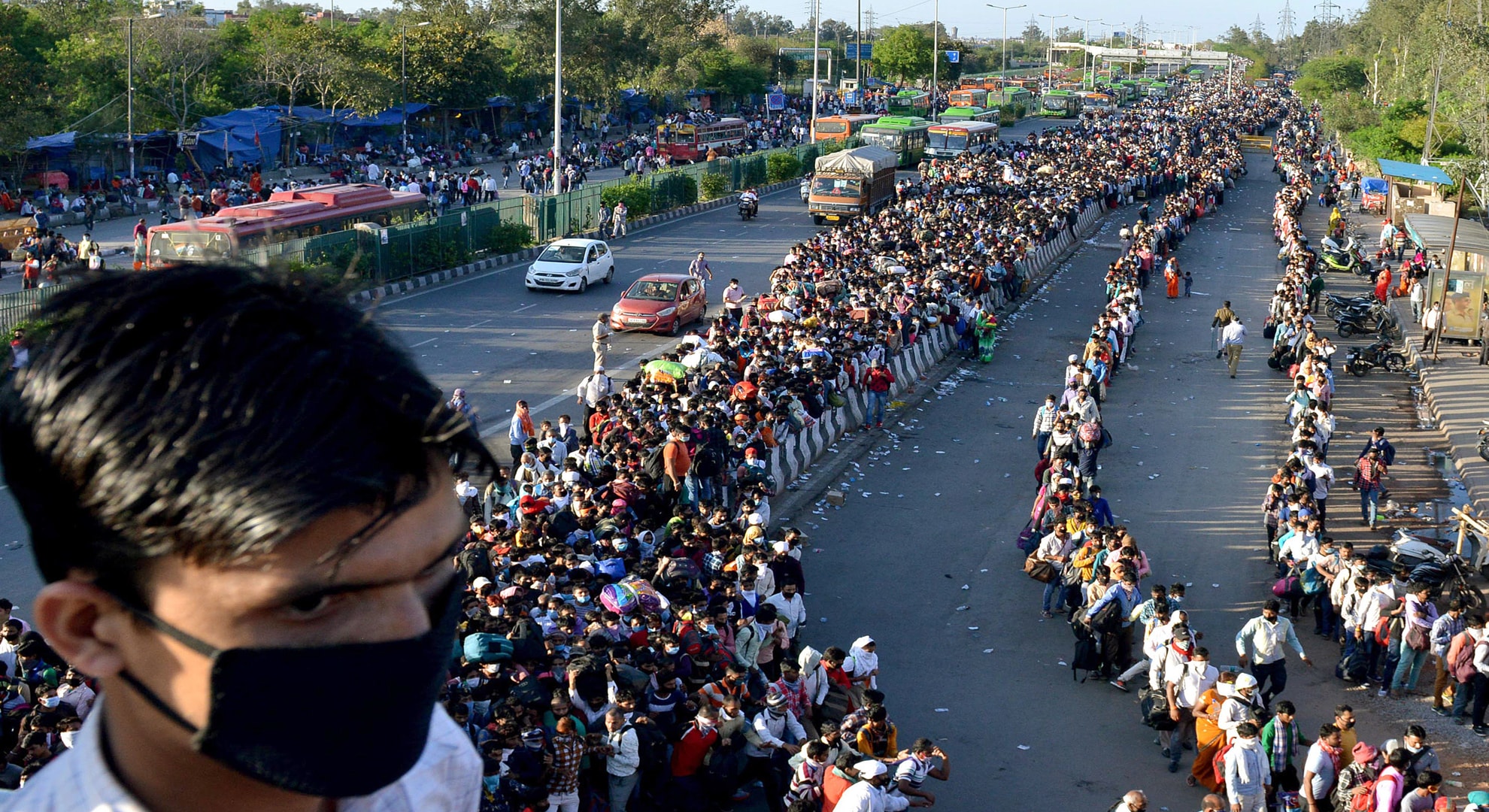 Tens of thousands of migrant workers thronged to transport hubs in New Delhi in a bid to return home. Photo: ANI

On March 28, Saturday, a 39-year-old migrant worker, Ranveer Singh, died in the State of Uttar Pradesh in India after walking for 200 km. The man had left the city of Delhi where he had been working after a countrywide lockdown was announced due to the COVID-19 pandemic. In the absence of any work and food and with no means of transport, he decided to walk the 285-km path to his house in the State of Madhya Pradesh. But he never made it home

Long, packed queues at bus stands, people with children on their shoulders walking hundreds of kilometers, police beating up and punishing those stepping out to buy groceries – these were some of the shocking visuals that symbolized the world’s largest COVID-19 lockdown in India. As of March 29, India had reported 1,026 cases, 912 of which were active. 27 people have died so far.

India’s prime minister Narendra Modi announced the 21-day lockdown on March 24, Tuesday, and it took effect that night. However, it soon became clear that adequate preparations had not been made to deal with the impact such a measure would have. The worst affected are the poor and those who depend on daily wages for survival.

Massive queues were witnessed in transport hubs at the capital of New Delhi where migrant workers gathered in large numbers in an attempt to go home to other States. The State government of Uttar Pradesh was force to press buses into action to bring some of the migrant workers back. Meanwhile, many chose to make the journey on foot despite most shops and roadside eateries remaining closed. Tens of thousands who work in construction, petty businesses or the gig economy, driving taxis, etc. were seen streaming out of the cities, mostly on foot. Some of them were seen walking hundreds of kilometers in the absence of any other means of transport and lack of monetary resources.

Ghanshyam Lal who works in a leather factory in Dharavi laughs when I ask him about social distancing. He earns 250 rupees a day with no means of sanitation. He is unable to take his wife who is on dialysis to the hospital. "We are all going to die in a few days of hunger"

Meanwhile, the police force in different parts of the country is resorting to violence to keep people off the streets. Social media is flooded with videos and reports of incidents of mistreatment of people by the police, including violent assaults. One person succumbed to his injuries in Howrah in the eastern State of West Bengal after reportedly being beaten up by the police for violating the curfew on March 25.

The family of the deceased, identified as Lal Swami, claimed that he had stepped outside his house to buy milk when the police got hold of him and began hitting him with sticks. However, the police in their statement claimed that the victim had suffered cardiac arrest.

The fear of essential commodities running out has created anxiety within the population, leading to the hoarding of goods.

In an earlier address to the country, prime minister Modi had called on the public to come out on their balconies and clap and ring bells etc., to show appreciation for the emergency and health workers across the country. However, critics and activists on the ground have pointed out that such empty gestures do not aid in the fight against the disease. In many places, people had gathered in large numbers to follow the prime minister’s call, rendering pointless his call for isolation.

According to Subodh Varma of Newsclick, the prime minister did not provide any details about how the lockdown would be implemented in his address. This was clarified later in the guidelines released by the Union Home Ministry. “In essence, the lockdown has exempted defence staff, hospitals, ration and provision stores, fuel supply chains, etc,” he wrote. (Read further analyses of the lockdown here and here.)

“There are some other much more weighty issues here: One, can a complete lockdown really be enforced down to the villages and fields in the vast rural hinterland and the slums of urban India? And how? And two, whether this will break the transmission of coronavirus and thus save India from an imminent catastrophe?” he said.

A majority of India’s population is based in rural areas and 22% live under the poverty level, according to official data. A large segment lives in economically weak conditions and without institutional support, more than half of Indians would not be able to afford to stay at home without work. As per some estimates, compensation for the lockdown period could cost around INR 3 lakh crore (roughly more than USD 35 billion) or 1.5% of India’s current GDP.

Surajit Das, assistant professor at Center for Economic Studies and Planning at the Jawaharlal Nehru University, wrote “casual labourers, especially the self-employed and daily-wage earners would not be able to self-quarantine themselves for long, since they will not earn if they do not venture out to work. They may still try for a week or ten days, but, if they do not get to work for between 15 days to a month, many of them would simply die of hunger.”

Left parties and various social movements have raised the need to urgently assist the poor at  this time of crisis. Finance minister Nirmala Sitharaman announced a long awaited relief package of around INR 1.7 lakh crore (about USD 22 billion) on March 26, Thursday. According to Sitharaman, the package will benefit millions of people who will be provided free cereals and gas and cash through direct transfer for three months. It will also provide medical insurance to the frontline medical professionals.

Sitaram Yechury, the general secretary of the Communist Party of India Marxist (CPI(M)), said the package had “missed out on a crucial issue of the migrant workers returning to their own states. We have airlifted Indians from many countries abroad, surely our own brethren should have been provided with food and shelter, to either stay where they are currently or to be transported to their home states.”

He further said that many of the provisions in the package for the poor are grossly inadequate, and that the government needs to come out of its preoccupation with the fiscal deficit and provide relief to workers facing retrenchment, along with providing loan waivers to farmers and small producers.

Experts have noted that simply locking down the country may not entirely remove the threat of the novel coronavirus spread, but might only limit the mortality to some extent. Even the World Health Organization has suggested that once the restrictions are lifted there are possibilities of the virus spreading again. “Screen, test, isolate, treat” remains the basic mantra to control the spread of virus within the community. The Indian government has so far failed miserably in this regard, with levels of testing remaining abysmally low.

Amid the chaos, the communist-ruled southern Indian state of Kerala continues to set a positive example. Chief Minister Pinarayi Vijayan has opened up community kitchens and shelter homes for migrant workers. On Friday, the state government ordered opening up of 4,603 relief camps for more than one hundred thousand migrant workers in the state.  The chief minister also ordered another 35 camps for 1,545 homeless and destitute people.

On Sunday, the finance minister of Kerala tweeted

What a marvellous achievement! On 4th day of Community Kitchen Challenge targets surpassed. 1059 kitchens set up by Kerala LSGs, 913 in partnership with Kudumbasree. 52480 meals served , 80% free and 60% home delivery. Within few days kitchen no. to double, meals no. to 4 fold