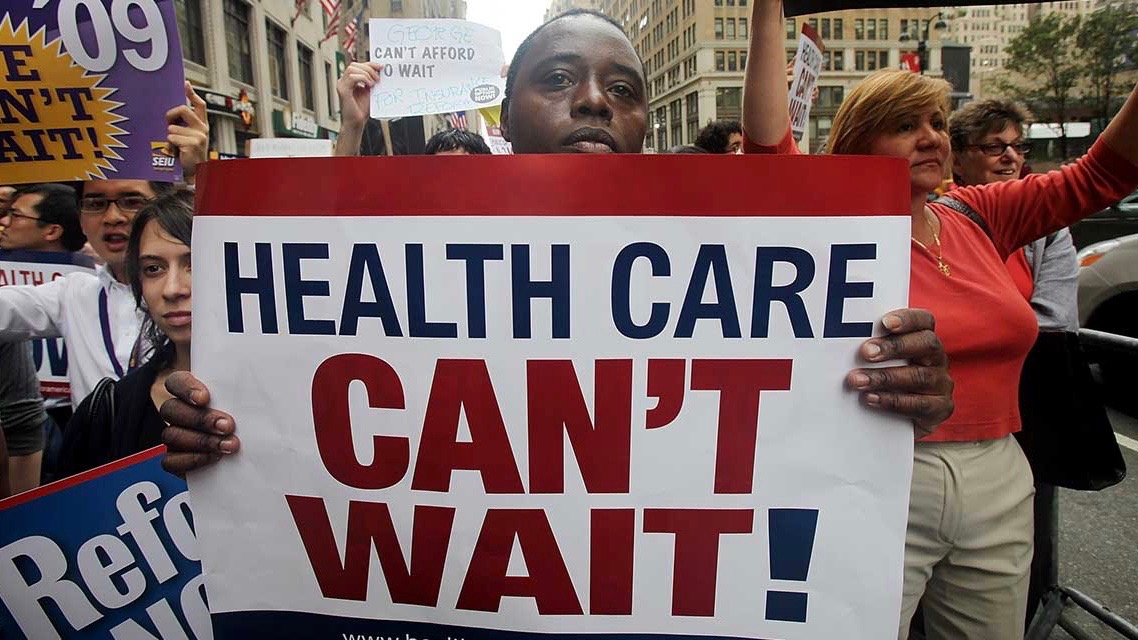 The adoption of neoliberal policy brought many nations to push for the privatization of healthcare which weakens healthcare systems and excludes many.

1. Introduction: The origin of the WHO’s celebration.

April 7 was the commemoration of International Health Day. The date was established in 1948 by the World Health Organization (WHO), whose main objective is to raise public awareness about the quality of life and other issues that concern and affect the health of people across the globe. As far as is known, this date does not refer to any particular phenomenon or fact, but marks the foundation day of the WHO. The WHO turns 72 as an organization. During World War I a hygiene committee was established, which was the embryo of the WHO.

During all these years, the organization has faced several challenges, such as the fight against tuberculosis, tetanus, polio, HIV, smoking and, most recently, ebola. Now, it is faced with the challenge of trying to guide governments in social isolation practices, and other preparations to prevent the rapid expansion of the novel coronavirus like creating a methodology of care to prevent the death and suffering of the infected people as well as the collapse of the health system in each country. But the biggest challenge is to seek a cure and vaccines for this disease amid the pandemic.

Those of us who are lay in the subject, have little knowledge, but the WHO, since its inception, has adopted annual issues to reflect on the health-related problems affecting the world’s population. In 2015, for example, the issue was food safety and the WHO’s slogan was “from the field to the table, obtaining safe food,” which was directed at the food security debate. In 2019, the year when China warned the world about a massive infection in Wuhan City, its motto was “Universal health: for everyone, everywhere.” Yet, back in 1946, when the WHO was still a part of the United Nations health commission, it approved a concept of health that broadened the world’s view of what it would be like to be healthy under the banner of “Health is a state of complete physical, mental and social well-being and not just the absence of illnesses or ailments.”

This concept has suffered from successive changes and influences, especially from the report of the eighth national health conference held in Brasilia between March 17 to 21, 1986, which defines health as a right. “In its most comprehensive sense, health is the result of the conditions of food, housing, education, income, environment, work, transport, employment, leisure, freedom, access and possession of land and access to healthcare services, above all, it is the result of the forms of social organization of production that can generate great inequalities in living standards… The right to health means the guarantee by the State to decent living conditions and universal and equal access to actions and services to promote the protection and recovery of health at all levels and for all inhabitants,” states the report.

In times of the new coronavirus pandemic, the world has many challenges to face in the field of health. The central problem today is to prevent the global spread of the virus which challenges science. Capital, governments and especially urbanized society have become fertile ground for the COVID-19 disease caused by the virus.

Humanity has always been marked by epidemics. Peoples, kingdoms and populations have been totally wiped out. They were much more destructive than great wars, earthquakes or tsunamis. Before science, especially in the Middle Ages, and even today in some places, religions and (false) prophets attempt to attribute epidemics to God, as a warning from God “on perverted social behavior, or as punishment, for collective sins, and conveying the idea of a sin.” The answer to this has been “prohibiting sinners from living with the community and expelling them from the city,” in order to purify social life.

2. Factors that influence the spread of the virus.

We are facing an international pandemic. Almost all of the 193 countries are facing its consequences. The reason being that the virus spreads very quickly, infecting thousands of people at the same time. Some factors can be listed as facilitators of this rapid expansion, but from what is known in all epidemics, the orientation has always been social isolation as a way to stop the spread of the disease caused by the virus. But at this historic moment, we have conditions that favor the expansion of the virus.

The first principal factor is the large urban concentrations. In the last century, there was a very rapid expansion of the urban environment. A large part of the world’s population lives grouped together in urban environments. A large part of the world’s population is concentrated in large cities and large metropolises. In addition to this, the living conditions of the population in large cities facilitate the spread and mass infection of the population by the new coronavirus, as well as of other epidemics and diseases.

Another large part of the urban population lives in slums, which are subjected to the most extreme living conditions. This population lives with the lack of necessary urban infrastructure such as: supply of drinking water, electricity, basic sanitation, waste collection, a sewer system, public transportation, schools for children and medical care.

The world’s urban population is increasingly impoverished, living in a social and economic situation, below the poverty line, a situation of almost absolute poverty. In these conditions, the peripheral urban populations are much more vulnerable to this type of epidemic, and are also dealing with other urban problems such as violence and unemployment.

The second factor is the environmental problem. In the name of the development of capital, the environmental reserves were completely destroyed, the rivers were polluted, the riparian forests that protected rivers and springs were completely destroyed. The cities are left without forest belts, as a strip of transition between the countryside and the city, which leads to the spread and rapid expansion of diseases, pests and viruses. As a result, the populations living in the countryside, especially villages, small towns and rural communities also become very vulnerable.

The third factor is the fragility and vulnerability of the human being, of the human body, subject to hypertension, obesity, stress, low immunity, as a result of the food offered to the population with the basis of hormones and pesticides. This process became more serious since World War II, in the middle of the last century, when a technological package based on chemical fertilization, pesticides, hybrid and genetically modified seeds (transgenic) and high mechanization was imposed on agriculture. This had the aim of increasing productivity in agricultural production and increasing capitalist income in the field.

The urban population began to feed on food produced from pesticides and industrialized products, which has weakened the human body, affecting its resistance power and with each generation, making it more vulnerable to diseases, especially new diseases and infections from viruses and bacteria.

So, the only way out is isolation to prevent the spread of the new coronavirus. But since the vast majority of the population lives in large cities, the great challenge, in times of pandemic, is how to keep this population isolated at home. This is especially challenging when the majority depends on informal work, which logically depends on the circulation of people, and lives on the daily income to survive, without forgetting of course that a part of this population lives in a situation of homelessness.

3. Challenges to overcome the pandemic.

Health in today’s world, in addition to the cyclical challenge of overcoming the new coronavirus pandemic, presents new strategic challenges. These are marked by the fragility in dealing with today’s pandemic, and how the world’s population is held hostage to government stances and vulnerable to global pandemics.

The first challenge is structural, it is neoliberalism. In the 1980s, it attempted, in the name of “development and globalization of the economy,” to privatize the entire public health structure, transforming public health services into goods, serving capital. In the name of dismantling the market for public health systems around the world, private health plans have replaced public health. Private hospitals and conglomerates of companies and corporations take over hospitals, emergency rooms, laboratories, research, technology and health logistics, replacing or weakening public healthcare networks. Health became a commodity, available in the market for those who can pay for care, for those who cannot, are left at the mercy of the precarious public health system.

At this time, when the health system is collapsing, most countries do not have a structured public health service to respond to the proliferation of viruses and diseases. The collapse of the world’s health system is inherent in the way capital has transformed health into a commodity. The focus is not on curing people, but on the benefit that capitalist companies can derive from people’s illnesses. They are much less concerned about health and are more committed to people’s diseases. Diseases excite them because they allow capital to extract benefits from the process.

The great challenge in today’s world is to rebuild responsible and free public health systems, from basic health care services to developing research, technologies, structures that can respond on a daily basis as well as to the chaos that health presents today in most countries across the world. Most importantly, it must be able to respond to the moments of emergency. This pandemic will pass, the major or minor consequences will depend on the attitudes of the government: whether to defend people’s lives first or capital. But surely the world will see that more and more recurrent processes of epidemics and diseases will spread rapidly throughout the world like a pandemic.

The second challenge is focused on agricultural production and eating habits around the world. It is urgent and immediate that the world overcomes this model of food production, based on high-productivity production, transgenic seeds and pesticides controlled by large capitalist corporations, which impose a standardized consumption of food for everyone.

This is at the service of profits and the market. Food products are sold on the stock exchange as commodities. Now, the local and regional markets, production and food (culture) habits that must be substituted to be based on healthier food production, consumption and culture, like agroecology and a friendlier relationship between the farmer who produces the food, the population that consumes and the environment. These factors can restructure people’s health and strengthen their immune system, thus avoiding the chaos of public health and disease. Therefore, based on a new habit (reconstruction of food culture and regional cuisine), we can get the human body to recover itself as well as guarantee its endurance, by taking more care of the health than of the diseases.

The third challenge focuses on a strategy to unify procedures, data and research on diseases and ways to combat them around the world. Countries can no longer be taken hostage by capital, large enterprises and conglomerates that exploit the health sector. The world has to build a universal format, in which knowledge acquired anywhere in the world cannot be patented, in which companies dominate technology and put it on the market for sale.