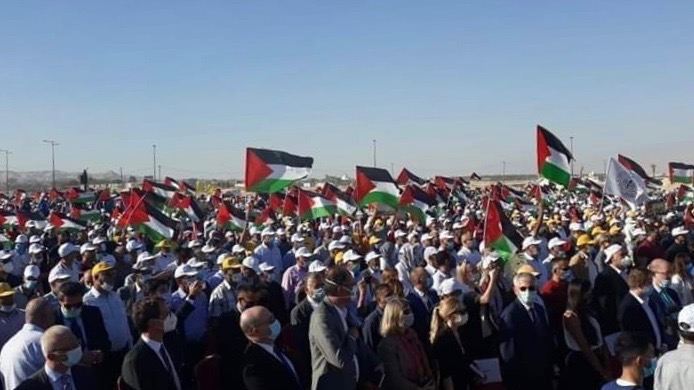 Thousands of protesters gathered in Jericho to oppose the Israeli annexation plan on June 22, Monday.

On June 22, Monday, thousands of Palestinians participated in a demonstration in the city of Jericho against the proposed Israeli plan to annex large parts of the West Bank from July 1.

The protest was organized by the Palestinian Authority (PA) under its popular activities program to oppose the annexation.The protesters on Monday were joined by the United Nations peace envoy for the Middle East, Nickolay Mladenov, and representatives from China, Russia, European Union, Britain and Jordan. Some of these delegates spoke at the meeting and reiterated their support for a two-state solution and vowed to oppose the Israeli plan.

Though a large number of Palestinians were stopped by the Israeli forces at checkpoints, preventing them from participating, thousands of others defied the attempts and joined the protest from different parts of the occupied West Bank.

Israeli’s new coalition government, headed by prime minister Benjamin Netanyahu, has announced that it will start the process of extending Israeli sovereignty over the Jewish settlements and the Jordan Valley in the occupied West Bank from July 1, as per the proposals made by US president Donald Trump in his so called “peace plan” announced in January this year.

Trump’s proposal has been rejected by the Palestinians as unilateral and pro-Israel. They have warned that any move to annex parts of the occupied territories would amount to war crimes and will end all possibilities of a two-state solution.

The annexation is illegal according to international law and will be in violation of successive United Nations Security Council resolutions which have asked Israel to withdraw from the occupied territories. If implemented, Palestinians will lose 30% more of the West Bank land.

Speaking at the protest, Mladenov said, “The UN believes annexation is against international law, and if it happens, it might kill the very idea that peace and statehood for the Palestinian people can be achieved through negotiations,” Palestinian WAFA new agency reported.

EU representative Sven Kuhn von Burgsdorff said, “Other than those agreed by both sides and in line with international law and UN Security council resolutions, we do not recognize Israel’s sovereignty over the territories occupied since 1967, we will therefore closely monitor the situation and its broader implications and we will act accordingly.”

The protests were organized despite the restrictions imposed to prevent COVID-19 spread. Occupied West Bank had a record 142 new cases of infection on Monday, taking the total number of COVID-19 cases to more than 1,100.