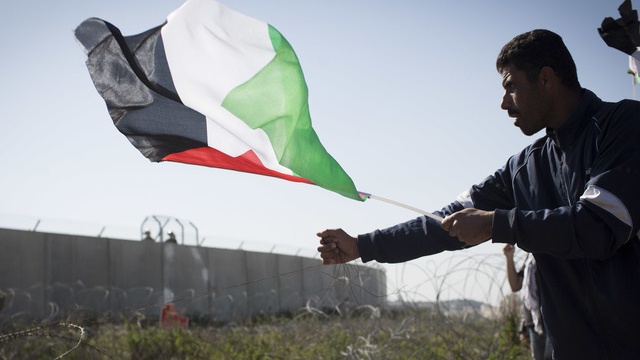 Israel and its allies have never accepted any form of Palestinian resistance. Oren ZivActiveStills

Palestinians across the political spectrum have condemned the deal signed between Israel and the UAE normalizing relations between the two. The Palestinian Liberation Organisation (PLO) issued a statement on Thursday, August 13, condemning the UAE-Israel deal as “a betrayal of Jerusalem, the Al-Aqsa Mosque and the Palestinian cause.” Earlier that day, president Donald Trump, announcing the deal which will lead to full normalization of relations between UAE and Israel, called it a “huge breakthrough.”

As part of the terms of the deal, signed under the mediation of the US, Israel has agreed to delay its proposed annexation of parts of the occupied West Bank announced in May this year in return for comprehensive trade and diplomatic relations with UAE.

However, hours after the issuance of the agreement document by Trump, Israeli prime minister Benjamin Netanyahu reiterated in a television broadcast that the plan to annex the West Bank territories remains on the table.

The PLO statement condemning the agreement called the UAE-Israel deal a violation of the Arab Peace Initiative. The agreement was reached by all the members of the Arab League in 2002 and was further endorsed in the 2007 and 2017 Arab summits. The Arab Peace Initiative sets a peaceful settlement of Israel-Palestinian conflict as the precondition for any normalization of relations between its signatories and Israel.  The PLO statement has asked the UAE to immediately withdraw from the deal.

May you never experience the agony of having your country stolen; may you never feel the pain of living in captivity under occupation; may you never witness the demolition of your home or murder of your loved ones. May you never be sold out by your “friends.” https://t.co/CBaNl1QQqx

Saeb Erakat, the general secretary of the PLO, asked the leadership of the League to initiate proceedings for the expulsion of UAE in a tweet on Wednesday.

ErakatSaeb on Palestine TV now: Secretary General of the Arab League must issue condemnation of the UAE-Israel deal because it violates the Arab League Charter, summit decisions, and the Arab Peace Initiative. Otherwise, he should resign.

Hamas has called the deal a “treacherous stab in the back.” Its political chief, Ismail Haniyeh, rejected “all unilateral declarations and decisions that seek to obliterate Palestinian rights and violate international resolutions,” Palestinian news agency Wafa reported.

The statement of the agreement shared by Trump on his Twitter handle expresses a desire for greater strategic cooperation between all three countries in the region and endorses Trump’s deal announced in January 2020. The deal promises a two-state solution. However, it recognizes Jerusalem as the capital of Israel and gives 30% additional land in the occupied West Bank to Israel. Netanyahu had announced the annexation of the occupied West Bank land promised in Trump’s deal.

UAE was the only country which was officially represented during the announcement of Trump’s so called “vision for peace” on January 28. UAE’s ambassador to the US, Yusuf al-Otaiba, had praised Trump’s plan as “a serious initiative that addresses many issues raised over the years.”  However, Palestinians and most of the world community have rejected the deal.