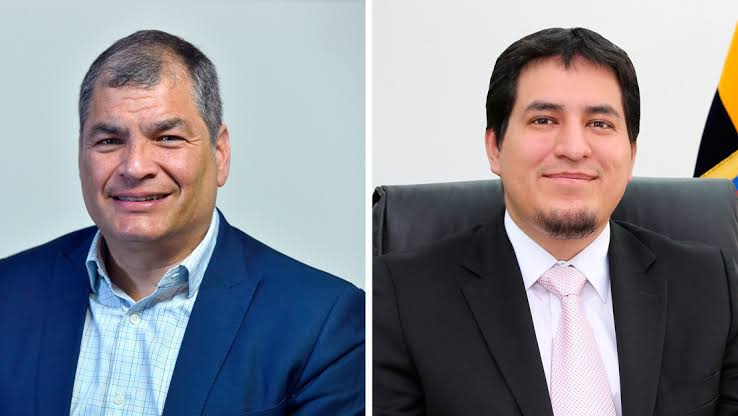 On August 18, former president Rafael Correa officially announced his candidacy for the vice-presidency of Ecuador in the general elections scheduled for February 7, 2021. Correa will accompany Andrés Arauz, who is running for the presidency of the country. The Arauz-Correa presidential ticket was presented by a new political movement called Union for Hope (UNES),

The UNES is a coalition of left-wing political parties such as Fuerza Compromiso Social or Social Commitment Force, Centro Democrático or Democratic Center as well as several social organizations, trade unions, student, teacher, Indigenous, peasant, women and LGBTQI movements, among others.

“It is time for the Union for Hope. Here we are, despite all the spurious attempts to prevent us from participating,” said Correa in the virtually held presentation event of the UNES, referring to the attempts to bar the Social Commitment Force from the elections.

He congratulated all the members and stressed that they have a historical responsibility of not only fighting for victory, but also rescuing the country. He said that the country is experiencing one of the hardest moments in its history, highlighting the economic and health crisis due to the mishandling of the coronavirus pandemic and the neoliberal policies of president Lenín Moreno.

Arauz, who is currently residing in Mexico pursuing a doctorate in financial economics at the National Autonomous University of Mexico (UNAM), said that his government’s priorities will be to face the health emergency, lift the country out of the economic crisis, recover democratic institutions and resume the path of development.

35-year-old Arauz is an economist and he served the country from various positions during Correa’s government (2007-2017). He was the Minister of Culture at the end of Correa’s second mandate and the Minister of Knowledge and Human Talent between March 2015 and 2017. In addition, he also served as the Director of the Central Bank of Ecuador between 2011 and 2013.

This August 21, a hearing to start a trial against political leaders and members of Correa’s Citizens’ Revolution party: Christian Gonzalez, Paola Pabón and Virgilio Hernández, will be held. The leaders have been accused of organizing a “rebellion” during the 12 days of national protest carried out by citizens in October 2019 against Moreno’s austerity measures.

The persecution consists of a series of irregular legal-administrative actions. The leaders were illegally detained for months. According to their lawyer, Ramiro Aguilar, there is no proof in the process that any of them directed, financed or instigated an armed group, elements that constitute the crime of rebellion.

The case has been denounced nationally and internationally as an act of misuse of power and political persecution against “Correistas”.

Correa’s candidacy is uncertain due to the lawfare being waged against him by the Moreno administration. Correa, who is residing in Belgium, faces several lawsuits with arrest warrants.

In April, Ecuador’s national court of justice sentenced Correa to 8 years in prison and barred him from electoral politics for 25 years on bribery and corruption charges for his alleged involvement in the “Bribes 2012-2016” case. Last month, the second instance court rejected Correa’s appeal and confirmed his sentence. On August 7, Correa’s lawyers filed an appeal before the court of cassation, so the sentence is not yet final. However, Correa also has a preventive prison order for the case of the failed kidnapping of opposition leader Fernando Balda.

A recent reform on electoral laws establishes that in order to stand in elections, participants must present their candidature in person in the country. Last week, the National Electoral Council (CNE) enabled online registration of candidacy due to COVID-19, but stressed that the applicants must appear before the entity not through delegates but in person to confirm that they accept the nomination.

Arauz himself filed an appeal in July before the Electoral Dispute Court to suspend the new rule and demanded that the registration be allowed at a consulate, as it was the case before.

It remains to be seen whether Correa can do so in a non-in-person manner by appearing before the Ecuadorian institutions in Belgium. Correa’s candidacy, if qualified, could help him delay the legal processes against him temporarily thanks to the immunity that candidates have in Ecuador during the election process.

Correa, who has been facing constant political harassment under Moreno’s rule, rejected the charges pressed against him and denounced them as a form of political persecution intended to prevent him from running in the elections.

Moreno, who was Correa’s vice president from 2007 to 2013, promised to continue with Correa’s progressive and anti-imperialist policies in the 2017 elections. However, after Moreno was elected, he shifted his political stance, distancing himself from Correa’s left-wing politics and promoting neoliberal policies domestically and aligning Ecuador’s foreign policy with the US interests. In addition to betraying the legacy of the Citizens’ Revolution, Moreno also waged a “lawfare” against Correa and his allies with a combination of electoral reforms and leveling of false charges against them to impede them from contesting in the elections.

Ecuador has already accumulated significant debt with international financial institutions during Moreno’s government. In April 2019, the government signed a 4.2 billion USD deal with the IMF and imposed a set of austerity measures such as significant cuts in public sector funding of key services like education, health and social programs. The steady weakening of the public sector by the Moreno administration left Ecuador extremely unprepared to respond to the COVID-19 pandemic.

Initially, in the beginning of April, Ecuador was one of the most affected Latin American countries by the coronavirus disease. The country suffered one of the highest rates of infection and mortality. It also faced an extremely high rate of inflation in the prices of essential products such as face masks, sanitizers and basic food products. The city of Guayaquil faced the most dreadful moments. The dead bodies of the victims of the pandemic piled up on streets in the city as funeral services failed to collect them on time, forcing families to abandon them. In July, the country limited the testing of COVID-19 as it struggled for test supplies.

The national government’s inability to manage the emergencies caused by the pandemic left millions of citizens with no economic or food aid. In the face of the economic and health crisis and the government’s abandonment, various social movements organized among themselves and came forward to help the citizens.

The National Farmers Movement FECAOL, the Association of Transport Workers, the National Federation of Popular Educators, National Coordinator of Neighbourhoods of Ecuador, Women organization Mujeres sin limites, the National Federation of Artists, among several other organizations, created farmers brigades to supply food to the population and to confront price speculation nationally. With the slogan of “food is not a commodity but a human right”, they served more than 120 thousand families throughout the country with essential food products at minimal prices.

As of August 19, Ecuador has registered 104,475 confirmed cases of the novel coronavirus and 6,146 deaths. However, there are another 3,581 deaths in the past five months that are suspected to be coronavirus related, but have not been confirmed.