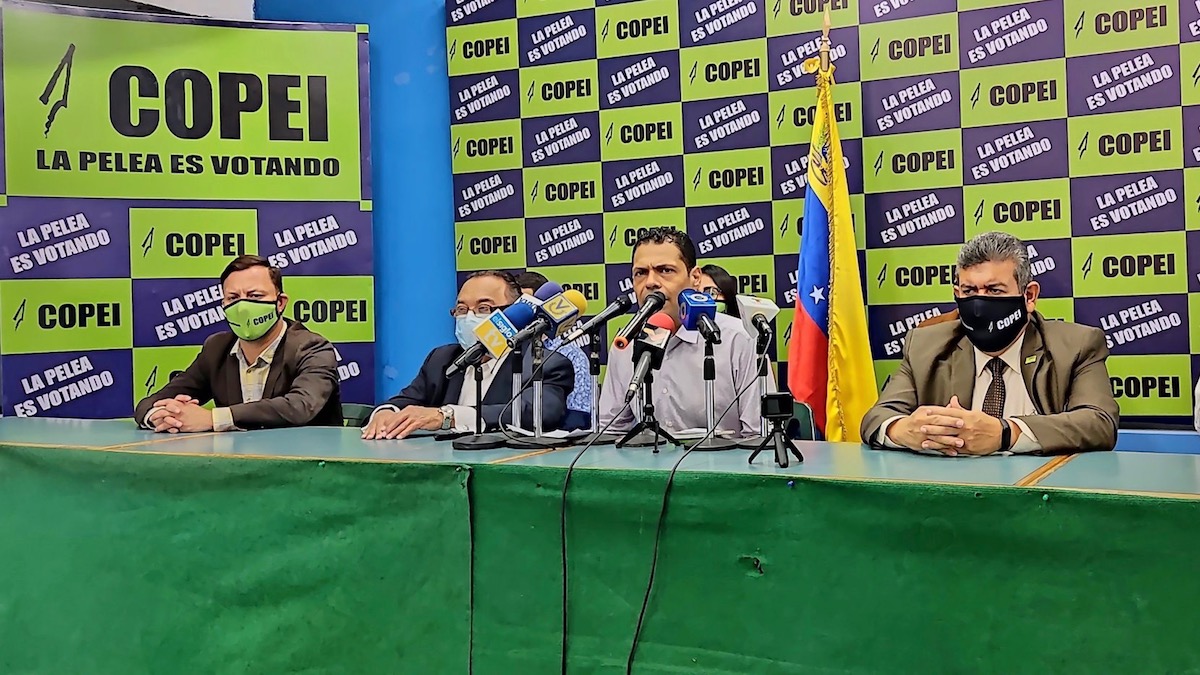 Opposition party COPEI holds a press conference on December 10 following the legislative elections in Venezuela. Their alliance won 17% of the seats in the Assembly. The banner reads "the struggle is through voting," manifesting their position against the far-right boycott of the process. Photo: COPEI

Before the National Assembly elections on December 6 in Venezuela, the United States government began a campaign to delegitimize the process. The US government sanctioned the head of the National Electoral Council (CNE) and members of the opposition who had decided to run in the election. Just hours after the election, both the US government and the European Union—as well as their allies in Latin America—announced, predictably, that the elections had been fraudulent. They did not need evidence; they did not need anything except the reiteration of the simple line that an election in a country whose government challenges US authority cannot be legitimate in any way.

US Secretary of State Mike Pompeo said that the election was a “political farce” and a “charade,” and that it “failed to meet any minimum standard of credibility.” The high representative of the European Union (EU) essentially mimicked Pompeo’s statement to the level of using a similar phrase; the EU said that Venezuela “failed to comply with the minimum international standards for a credible process.”

The day before the election, I participated in an on-the-record meeting with leaders of five major opposition parties that participated in the elections. Two of these parties form the partidocracia, the old political establishment that dominated the country’s government from 1959 to 1999: Acción Democrática (AD) and Comité de Organización Política Electoral Independiente (COPEI). The leaders of both AD and COPEI—such as Pedro José Rojas (AD) and Juan Carlos Alvarado (COPEI)—said that there might be the normal irregularities in the election, but there was no evidence of fraud leading up to the election.

Bruno Gallo (Avanzada Progresista) told me that he had spent 10 years looking closely at the CNE for fraud, with the intent to undermine it, but could not find any evidence of sustained fraud. This is a fair election, he said, as far as elections go.

Shut Down the Interim Government

Timoteo Zambrano, a leader of Cambiemos Movimiento Ciudadano, told me that the key outcome of the election for the new National Assembly is to “end the duality of power in Venezuela.” All of these leaders of parties said that they were fed up with the outrageousness of the “extremist opposition,” at whose center is Juan Guaidó and the Voluntad Popular party of Leopoldo López (now living in Spain). Gallo said that this group uses “dirty tricks”; Guaidó and López represent the US government more than the Venezuelan people.

To “end the duality of power” means to shut down the “government” of Guaidó imposed on the Venezuelan people by US President Donald Trump. A few days after the December 6 election, two-time opposition presidential candidate Henrique Capriles gave an interview to BBC, where he asked the United States to drop its backing of Juan Guaidó. “The new administration,” Capriles said with reference to the incoming presidency of Joe Biden, “must understand that this plan is exhausted and cannot give continuity to the status quo: the interim [government].” Capriles, who lives in Caracas, said that any political solution “cannot be without taking into account the 25 million Venezuelans.”

In other words, Venezuela’s political future cannot be dictated from Washington. But, Capriles admitted, the opposition is in disarray. “We enter a desert,” he said of his fellow opposition. “With no willingness to end the status quo,” Capriles noted, “we are going to disappear as an alternative in this country.”

Media outlets in the North Atlantic world mimic the statements of the US State Department and the European Union. They simply say that the election was fraudulent and that the National Assembly that will be inaugurated on January 5 is illegitimate. That’s the sum total of the coverage.

The New York Times’ Julie Turkewitz, for instance, wrote a story that ignored the entire credible opposition in Venezuela, including the two main parties (AD and COPEI). The headline was “Venezuela Votes in an Election the Opposition Calls a Charade,” but the only “opposition” to which it referred was Guaidó’s US State Department operation.

Tom Phillips, writing from Rio de Janeiro for the Guardian, framed his story based on a quote from Juan Guaidó. The headline for that story read, “Maduro tightens grip over Venezuela with win in boycotted congress vote.” Who boycotted the vote? Not AD or COPEI, nor the main evangelical party (Esperanza por El Cambio) nor the main liberal party (Cambiemos Movimiento Ciudadano). Phillips only pointed to Guaidó even as he noted that Guaidó’s authority over the opposition was nil.

Neither Turkewitz nor Phillips gave any coverage to the mainstream opposition in Venezuela, which seeks a national dialogue in the country without interference from Washington, D.C., and without the sword of regime change hanging over the government.

The government of President Nicolás Maduro has held discussions with this credible opposition on several occasions. Zambrano said that the new National Assembly must impanel a commission to study the impact of the sanctions—or the blockade, as Juan Carlos Alvarado of COPEI called it—on the people of Venezuela. Such moves to rebuild the integrity of the political process—attacked by the US government through its alliance with López and Guaidó—are essential for the Venezuelan people. The election of December 6 and the inauguration of the new National Assembly on January 5, 2021, are the start of this process to rebuild the political world inside Venezuela. The message from both the government of Maduro and the credible opposition is the same: Washington, don’t interfere in our political life.