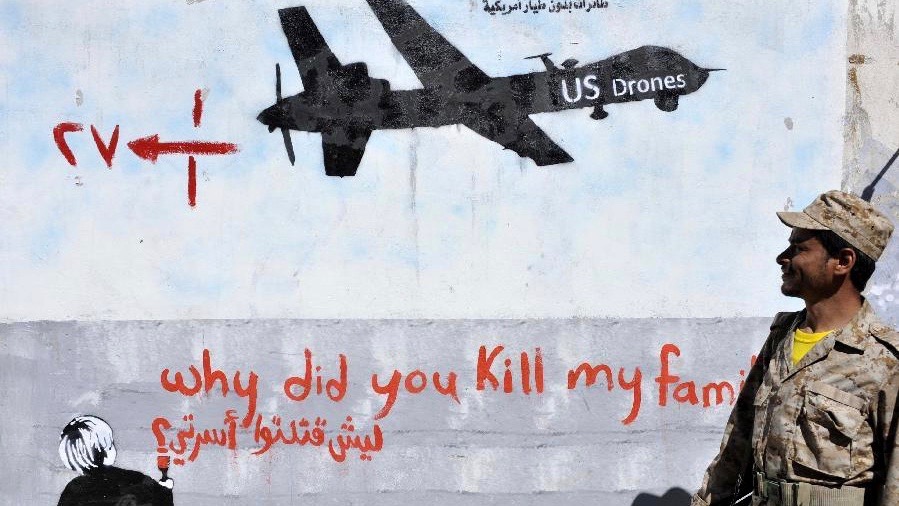 Two Yemeni families which lost members to illegal drone strikes conducted by the US military in Yemen have filed a petition at the Inter-American Commission on Human Rights against the US government, Al Jazeera reported on January 28, Thursday. The aim of the petition is to prevent future deaths of Yemeni civilians and devastation caused by drone strikes.

34 members of the Al-Ameri and Al-Taisy families were killed in six drone strikes and one special operations raid conducted by the US military spanning from 2013 to 2018, during the administrations of former US presidents Barack Obama and Donald Trump. In total, the seven US military operations led to 48 deaths, including 17 children.

Human rights group Reprieve filed the petition on behalf of the two families on Tuesday. The group told reporters, “what the families are hoping for from the commission is first and foremost recognition of the harm that’s been done to them. They’ve tried time and time again to engage the Yemeni and US governments to stop the strikes, and yet they’ve continued. The commission, for them, is a last resort to try to put forward evidence to say ‘you’re making a mistake, whatever you think it is we’ve done, we’ve not done, please stop the strikes’.”

Through the petition, the families are making an appeal to the commission to urge the US government to take the necessary steps to prevent such unlawful operations in the future which cause death and injury, damage to personal property, displacement and loss of livelihood for Yemeni civilians. The remaining surviving members of the two families also have to deal with the psychological trauma from the tragedy.

If the commission determines the drone strikes as unlawful, it would mark a symbolic victory for the Yemeni families and highlight the human cost of US drone strikes. However, chances that the commission, which is affiliated with the Organization of American States, will force a change in US policy are bleak. The US has conducted covert drone strikes not just in Yemen, but also in Pakistan, Somalia, Syria, Iraq, and elsewhere.

Lisa Reinsberg, executive director of the International Justice Resource Center, was quoted by the Washington Post as saying, “a decision from the commission concluding that the US is responsible for a particular human rights violation carries legal and moral weight internationally. It is also an important tool in creating pressure and opportunities to engage the government on reforms.” However, “a lot depends on the political will at the national level,” she added.

The drone strikes in question were conducted in the Al-Bayda governorate in Central Yemen. The US justified the attack by alleging that some members of the two families were suspected Al-Qaeda in the Arabian Peninsula (AQAP) militants. This charge has been rejected in the petition by one of the members of the Al-Ameri family, Aziz Al-Ameri, who claimed that most of the people killed were shepherds and farmers. Under the Obama administration, the first of the six drone strikes targeted a wedding procession in December 2013, killing at least 12 members of the two families. The remaining five drone strikes all occurred under Obama’s successor Donald Trump who also gave the go-ahead to US military special forces ground operations.

The Yemeni government had paid one million dollars in compensation to the two families for the 2013 drone strike. Human rights groups suspected that the money had very likely come from the US. Between 2017 and 2019, the Trump administration drastically ramped up its drone strikes operations in Yemen. As per Reprieve, the majority of the 160 or more drone strikes in this period were carried out in the Al-Bayda governorate.

The deadly drone strikes that almost always result in civilian casualties and damage to civilian infrastructure have for long been opposed by rights groups and other humanitarian organizations. Activists have called on the US government to end such indiscriminate and unlawful military and CIA drone operations.

The new US administration under recently sworn-in president Joe Biden indicated this week that it will take a fresh look at the US policy in West Asia, including re-examining the various aspects of US’ involvement in Yemen. US military and logistical support to the Saudi Arabia-led Gulf coalition intervening in Yemen, as well as the massive arms deals struck between the Trump administration and several Gulf states, could be under review. An estimated 1,376-1,773 Yemenis have been killed in drone strikes since 2002, many of them civilians.