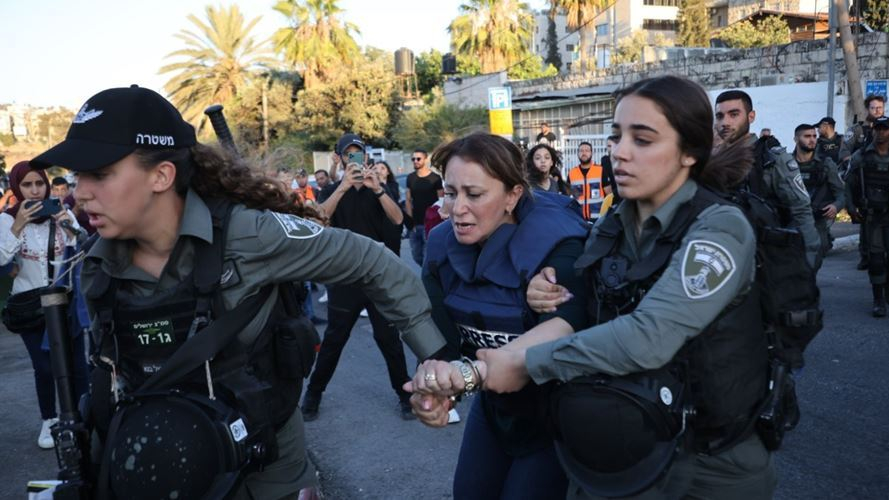 Israeli security forces on Sunday arrested prominent Palestinian activist Mona al-Kurd in a violent raid on her house in Sheikh Jarrah neighborhood in East Jerusalem. They also served summons for her twin brother Mohammad al-Kurd, who was away teaching at Ramallah and turned himself in later.

According to their father, the Israeli forces threatened to raid their home again if Mohammad did not show up at the police station. Their father, Nabil al-Kurd, in a statement to the press, said that his daughter’s arrest was part of “an operation to terrorize the parents, because the voice that emerged from the neighborhood was thanks to its youth.” He also revealed that his daughter and son were denied access to a lawyer during the interrogation, though it was their right under Israeli and international law.

The al-Kurd twins have been at the forefront of the resistance against the illegal evictions faced by several Palestinian families in Sheikh Jarrah. The two were eventually released after several hours of interrogation.

After her release, standing firm on her resolve to resist the eviction, Mona told reporters that “I will take it upon myself to chain myself in my room should they raid our house to forcibly expel us. I will not leave my home in Sheikh Jarrah.”

Israeli forces also violently cracked down on Palestinians participating in a demonstration in support of Sheikh Jarrah on Saturday, June 5, attacking and arresting journalists and destroying their equipment. Two other activists, Zuhair al-Rajabi and Iyad Abu Sneina, were also arrested from the adjoining neighborhood of Silwan on Sunday for resisting ongoing forced expulsions and displacement there.

Following their arrests, activists and supporters gathered outside the police station where they were being held to peacefully protest their arbitrary arrest and demand their release. Israeli security forces attacked the protesters with tear gas, stun grenades and rubber-coated steel bullets. Activists published the police station’s phone number online on social media, urging people to call and demand their release. Hashtags such as #الحرية_لمنى_الكرد, which translates to freedom for Muna al-Kurd, as well as #FreeMunaalKurd, were trending on Twitter.

Israeli violence continued through the weekend. Israeli forces attacked a demonstration commemorating the 54th anniversary of al-Naksa (the setback) on Saturday. During the demonstration Al Jazeera journalists Givara Budeiri and Nabil Mazzawi were detained for several hours. Several other journalists were also attacked and arrested over the weekend, including another Al Jazeera journalist, Najwan Samri, Maidan al-Quds correspondent, Bara’a Abu Ramoz and photojournalist Amjad Arafa. According to Budeiri, she was released on the condition that she will not enter Sheikh Jarrah for the next 15 days. Several of the journalists attacked sustained injuries and had to receive medical attention.

The Israeli forces also similarly injured at least 23 Palestinians on Friday who were taking part in a run from Sheikh Jarrah to Silwan to show solidarity with those at risk of eviction and displacement. They were attacked and physically assaulted. Many of the participants reported being violently struck on their legs.

The neighborhood of Sheikh Jarrah has received international attention over Israeli efforts to evict the residents of these Palestinian-majority areas and take over the land and homes to resettle them with Jewish settlers. The protests against the eviction and the attack on Al-Aqsa led Israel to carry out widespread violence in the occupied territories and the 11-day bombing of Gaza. The 11-day bombing campaign caused the death of more than 250 Palestinians and injured close to 2000.

Meanwhile, an appeal against the eviction has been pending in the High Court. This was following a lower court ruling in favor of eviction.

On Monday, June 7, the attorney general of Israel refused to intervene in the matter, despite asking for the hearing to be stopped last month as it could have led to the situation spiraling further. His decision paves the way for the High Court to decide whether it wishes to hear the appeal or not.