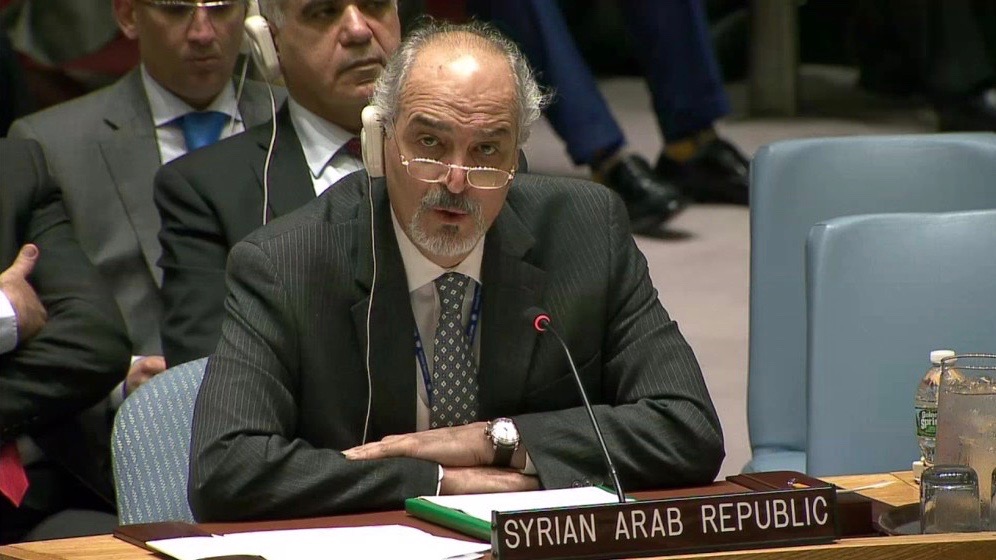 Syrian deputy foreign and expatriate minister Bashar Al-Jafaari claimed on Monday, January 24, that the US sanctions on Syria are responsible for the falling living standards and loss of livelihood for millions of Syrian people. He said that the ongoing war, supported and sustained by external forces, as well as the occupation of some parts of Syrian territory by foreign powers like the US and Turkey, have led to the deterioration of human rights in the country.

Al-Jafaari was speaking at a session of the Universal Periodic Review at the United Nations Human Rights Council in Geneva on Monday. He claimed that foreign control of Syrian territories has prevented the government from taking effective measures to address the concerns of citizens who are already suffering from a decade-long war.

A large part of the Syrian territory in the south-eastern part of the country has been directly occupied by the US in the name of fighting ISIS’ terrorism. The US has also created a permanent military base at al-Tanf in the Homs province. The US occupation forces have been accused of stealing Syrian oil and destroying infrastructure related to its production.

Turkey, which has been supporting the so-called rebel forces against the Bashar al-Assad government in Syria, controls parts of Raqqa and Aleppo provinces. It also maintains a buffer zone across its border with Syria. In 2019, Turkey devised a plan to resettle millions of Syrian refugees in areas controlled by it. Al-Jafaari accused that Turkey’s move to shift the Syrian refugees to certain areas amounts to forced demographic change which is a crime against humanity.

Israel has been occupying the Syrian Golan Heights since the 1967 war. It has carried out thousands of unprovoked air strikes inside Syria since the war began in 2011, killing scores of civilians and destroying civilian infrastructure.

Apart from illegally controlling its territories, the US has imposed draconian sanctions on Syria since the start of the war. In 2020, it passed the so-called Caesar Syria Civilian Protection Act, targeting firms and individuals dealing with Syria from anywhere in the world.

Sanctions have intensified the humanitarian crisis

International sanctions have led to a severe lack of essential commodities such as medicines, food and fuel, causing a massive rise in their prices. According to the World Food Program (WFP), around 12.8 million Syrians, out of a total population of nearly 20 million, are food insecure due to war and external sanctions. The number has gone up sharply since 2020 when 9.3 million Syrians were considered food insecure by the WFP.

The country is also facing a new surge in the number of unemployed in recent times, with the unemployment rate touching double digits last year. Nearly 80% of all Syrians are forced to live below the poverty line.

The reconstruction of civilian infrastructure destroyed in the war, including schools, hospitals, water facilities and housing units, will require massive investment, which is hampered by the sanctions. According to the UN, until last year, nearly half of the hospitals in the country were dysfunctional due to the war and sanctions with buildings destroyed and medicines and staff lacking.

The Syrian government has repeatedly asked for the removal of the sanctions, calling them a crime against humanity and new age economic warfare against the Syrian people. The demand to lift the sanctions has also been supported by the UN, which claimed that they violate the human rights of Syrians.

The UN has also said that the US sanctions have hampered the Syrian government’s efforts to effectively deal with the COVID-19 pandemic.

Al-Jafaari claimed that coercive measures against Syria have targeted the citizens’ right to life, health, education and their development in all forms. He added that the sanctions constitute acts of “economic terrorism”.

He said that the Syrian government has taken decisive steps to facilitate the return of Syrian refugees, including issuing dozens of decrees providing general amnesty and facilitating furnishing of documents through its foreign missions.

Around six million Syrians have been forced to flee the country since the war began in 2011. Most of them live in neighboring Turkey and Lebanon, but some have also moved to countries in Europe. Most of the refugees have been unable to return to Syria due to the continuing war conditions and deteriorating economy.