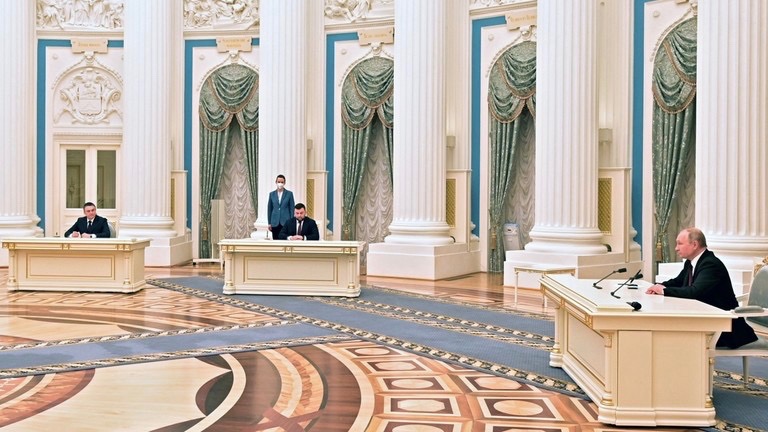 (From right) Russian president Vladimir Putin and heads of the Donetsk and Luhansk people’s republics, Denis Pushilin and Leonid Pasechnik, sign the decree to recognize them as independent entities in Moscow, Russia. (Photo: Sputnik/Aleksey Nikolsky)

The US and several of its allies announced that they will impose sanctions against Russia on Tuesday, February 22, claiming that Russian troops invaded Ukraine following President Vladimir Putin’s decision to deploy troops in the Ukrainian Donbass region.

US President Joe Biden in a speech claimed that recognition of the independence of the Donetsk and Luhansk people’s republics by Russia amounts to “beginning of Russian invasion of Ukraine.” He said that if Russia goes further, the US will retaliate with more sanctions.

The US sanctions target Russia’s sovereign debt and military bank, as well as some of its top financial institutions which would be unable to function in western financial markets now.

US-NATO ally, Germany, also announced suspension of the certification of the Nord Stream II gas pipeline from Russia. The move, announced by the newly elected German chancellor Olaf Scholz, will halt the process of construction of the USD 11 billion pipeline project considered crucial for energy supplies to Europe.

Similar moves were announced by Australia, Japan and Canada. However, another US ally and NATO member, France, has openly disagreed with the US assessment that recognition of independence of Donbass republics amounts to “invasion”.

Ukrainian president Volodymyr Zelensky in a speech on Tuesday announced that all diplomatic ties with Russia are cut, but refrained from calling the deployment of Russian troops in Donbass a declaration of war.

Meanwhile, UN chief Antonio Guterres in a Twitter post refused to accept Russian claims that its troops are deployed in Donetsk and Luhansk to keep the peace.

Russian foreign minister Sergey Lavrov claimed on Wednesday that Guterres’ statements are contrary to his assigned role in the UN charter. He also said that Guterres’ utterances reflect that he is under increasing western pressure on the Ukrainian issue, Sputnik reported.

Russia’s representative in the UN, Vassily Nebenzya, claimed in a meeting of the UN Security Council on Monday that Russia is open to further diplomacy, but his country will not allow “a bloodbath in the Donbass region.”

Putin claimed that Russian troops were deployed as per the invitations of the respective governments in the Donbass region, who signed friendship and cooperation deals with Russia on Tuesday. The deployment of Russian troops will act as a deterrent to possible Ukrainian attack in the region, according to Russia.

Meanwhile, a scheduled meeting between the Russian foreign minister and US secretary of state Antony Blinken on Thursday was cancelled by the US citing Russian recognition of the independence of Donetsk and Luhansk republics.

The respective leaders of Donetsk and Luhansk republics, Denis Pushilin and Loenid Pasechnik, had previously claimed that Ukrainian forces have already started offensives in violation of the Minsk ceasefire agreement in the last two weeks, because of which they had to evacuate thousands of people from the region into Russia for safety.

Both Donetsk and Luhansk people’s republics declared independence from Ukraine in 2014 after Ukrainian forces tried to curb pro-Russian demonstrations in the region. However, following the Minsk agreement in February 2015, Ukrainian government agreed to provide “special status” and autonomy to these republics within the country’s constitution. The leaders of the Donetsk and Luhansk republics, as well as Russia, have claimed that successive Ukrainian governments failed to act on the promises made in the Minsk agreement and have instead violated the ceasefire, threatening the security of millions of Russian speaking people in the region.