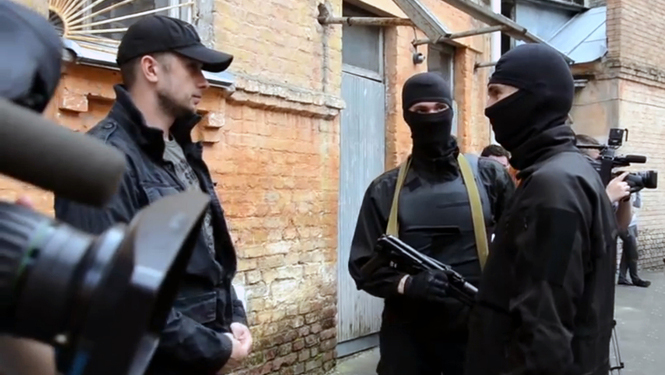 Caption: Azov Battalion volunteers. Azov has been successful at recruiting fighters from the Western far-right movement

“Remember, the Russians invaded Afghanistan back in 1980,” said former US Secretary of State Hillary Clinton shortly after the February Russian offensive in Ukraine. “It didn’t end well for the Russians.” she explained. “There were other unintended consequences as we know, but the fact is, that a very motivated, and then funded, and armed insurgency basically drove the Russians out of Afghanistan.” [emphasis added]

The “unintended consequences” Clinton referred to were the arming and funding of the mujahideen fighters, who eventually became the ultra-violent groups Al-Qaeda and the Taliban, who have terrorized and continue to terrorize both the people of Afghanistan and the US.

What Clinton hinted at, that the infamous Western tactic of using well-funded insurgents could win the war against Russia in Ukraine’s favor, has many worried about the potential fallout. Could Ukraine become the far-right’s Afghanistan, in which Neo-Nazi forces are able to use the war against Russia as a combat training ground?

These concerns are not misplaced. In Ukraine, far-right insurgent groups have gained considerable power since the 2014 Maidan coup, in which fascists took power and toppled a democratically-elected president. Ukraine already has a precedent of attracting ultra-right groups and individuals from other countries, who have sought to use existing political instability to gain combat experience.

Ukrainian government officials, as high-ranking as President Zelenskyy himself, have in the last month specifically asked for foreign fighters to join Ukraine in the war against Russia. According to Ukrainian Foreign Minister Dmytro Kuleba, 20,000 people from 52 countries have already volunteered to fight in Ukraine. Who are these volunteers? And what will be the consequence of this influx of foreign combatants, with differing or unclear motives?

Foreigners willing to defend Ukraine and world order as part of the International Legion of Territorial Defense of Ukraine, I invite you to contact foreign diplomatic missions of Ukraine in your respective countries. Together we defeated Hitler, and we will defeat Putin, too.

Foreign fighters have come in and out of Ukraine since the 2014 Euromaidan coup, led by ultra-right wing forces and backed by the US, which overthrew democratically-elected President Viktor Yanukovych. Many of these fighters were indeed right-wing extremists. Post-2014, the US Department of Justice opened up an investigation into several people from the US who went abroad to fight in Ukraine with ultra-right volunteer forces, and allegedly committed war crimes. The investigation centers around veteran US soldier Craig Lang, who traveled to Ukraine in May 2015 and fought alongside Ukrainian far-right battalions such as Right Sector. Lang had a history of violence: even before flying to Ukraine he was jailed after traveling across the US with the intention of murdering his pregnant wife. When he returned to the US from Ukraine, Lang, along with an accomplice, killed and robbed two people in a Florida robbery in order to fund more international right-wing exploits. These included a plan to travel to Venezuela to fight the democratically-elected socialist government.

Since 2014 and before the war started, over 17,000 foreign fighters have come to Ukraine from over 50 countries. Ultra-right groups such as the Azov Battalion, since incorporated into the Ukrainian National Guard post-Euromaidan, have been extremely effective at recruiting foreign fighters. Citizens of Germany, the UK, Brazil, Sweden, the United States, and Australia have traveled to Ukraine in order to join Azov. The Battalion maintains a “western outreach office”, which travels around Europe to promote its white supremacist views, and targets specifically right wing groups and individuals around the world. As the Soufan Center reports, “in July 2018, German-language fliers were distributed among the visitors at a right-wing rock festival in Thuringia, inviting them to be part of the Azov battalion: ‘join the ranks of the best’ to ‘save Europe from extinction.’”

The influence of neo-Nazis and the ultra-right has waned since Euromaidan. In 2019, the far-right suffered a humiliating defeat by winning only 2% of the vote in parliamentary elections. Yet, fascists maintain a significant hold on the military and police forces in Ukraine. As long as heavily armed Neo-Nazi groups like the Right Sector and the Azov Battalion continue to recruit amongst the worldwide right-wing and pull in disgruntled and violent individuals, the fascist movement will promulgate in Ukraine and in the rest of the world.

Are extremists traveling to fight in Ukraine?

Since the Russian invasion, foreign volunteers have poured into Ukraine in startling numbers. If the 20,000 claim by Ukrainian officials is to be believed, are a significant portion of these fighters right-wing extremists, or could they turn to the ultra-right while fighting alongside the likes of Azov?

Kacper Rekawek, a fellow at the Center for Research on Extremism at the University of Oslo who has studied foreign fighters in Ukraine since 2014, believes the answer so far is no. He told Slate, “All the people who go say one thing: ‘I’m here for humanitarian reasons’…Unlike in 2014, they don’t appear to be motivated, as a group, by a certain set of ideological tropes.”

It is too early to tell definitively how many foreign fighters traveling to Ukraine have ultra-right connections or sympathies. But contrary to what Rekawek claims, there are already concerning patterns emerging: According to the SITE Intelligence Group, which is tracking extremist activity surrounding the Russia–Ukraine war, Neo-Nazis in Germany and the US are urging others to fight and donate to Azov. Far-right groups are expressing an outpouring of support for Ukraine, and seeking to physically join the fight against Russia, who they view as communists despite the 30 plus years that have elapsed since the dissolution of the Soviet Union.

Most recently, Henry Hoeft, from Ohio, was profiled sympathetically in the Columbus Dispatch, which later had to revise the article to add that Hoeft had been a member of the far-right and heavily armed US group the Boogaloo Bois. Hoeft later made more news when he published a video detailing his experiences in the war, claiming that Ukrainian officials were understating the amount of foreign fighters who had died, sending foreigners to the front with no weapons, and cutting up foreign passports.

The Azov Battalion remains a central presence in the current war. This raises concerns that the tens of thousands of foreign fighters could be radicalized by groups like Azov. Azov is beloved throughout the world’s extreme right, with its symbols seen at a US Neo-Nazi rally and the motorcycle of a father and son duo who attempted to blow up a mosque in Italy. And in terms of their influence among potential foreign fighters, the director of the SITE Intelligence group writes, “Not since ISIS have we seen such a flurry of recruitment activity.”

Recently, Azov released of video of its members coating their bullets in pork fat, to be used to shoot Muslim Chechen soldiers. Azov is now the primary force defending Mariupol, a city that has made headlines all over Western media for its centrality in the war at the moment. The US, which has committed numerous war crimes of its own, has accused Russia of war crimes for its alleged bombing of the Mariupol Theater. However, conflicting reports, such as an AP article that claims there are no reported casualties, indicate a possibility that Azov bombed the theater themselves in order to gain more Western support.

With the likes Azov, European Neo-Nazis, and the Boogaloo Bois in the mix, there is reason to be concerns about foreign fighters returning home radicalized to the far right and/or with dangerous combat experience. However, with the war only a few weeks old, the issue of foreign fighters raises numerous other questions that cannot be answered as of yet. The sheer number of foreign fighters—20,000—is remarkable in itself. Can all these fighters be merely a ragtag mix of volunteers? Or does this indicate a coordinated effort by right-wing recruiters as SITE indicates? Or perhaps this hints at a hidden, larger effort by mercenary companies like Blackwater, who before the war had plans to create a $10 billion private army in Ukraine?

The situation on the ground for foreign fighters is pure chaos. A returned British soldier, fighting on the side of Ukraine, claims he was tortured by Ukrainian guards. A recent Russian strike killed an estimated 200 foreign combatants. Russia has announced that it intends to treat foreign fighters as mercenaries rather than lawful combatants, and the US has urged its citizens not to go fight. In fact, a 2019 study found that when foreign fighters deploy, violence against civilians goes up.

For foreign fighters, whether they are radicalized by the ultra-right or killed in the crossfire, the outlook is grim, highlighting the need for a peaceful resolution to the conflict.