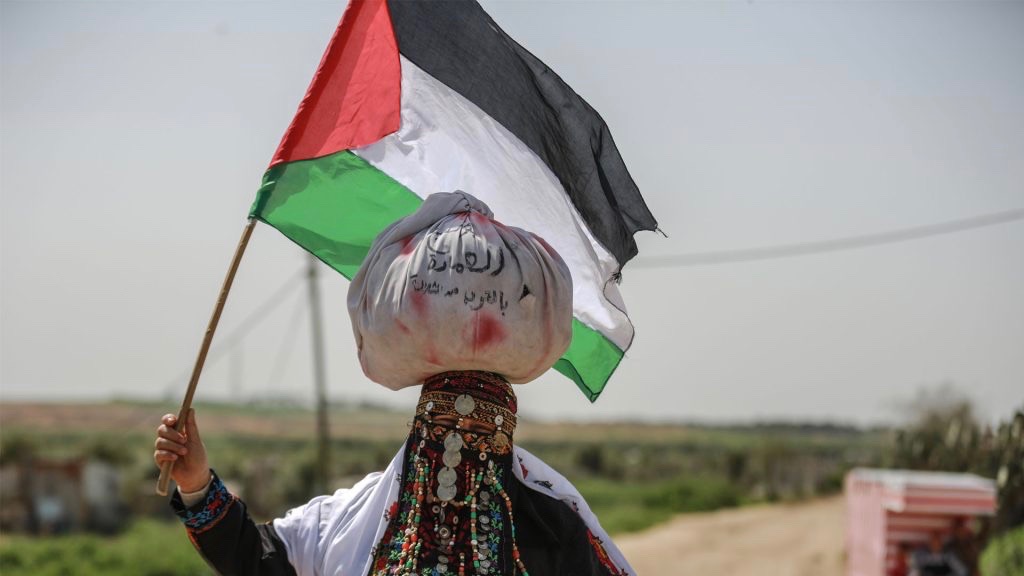 Thousands of Palestinians took to the streets in Gaza on Wednesday, March 30, to commemorate the 46th anniversary of the Yawm al-Ard (Land Day). The day is marked to reiterate the commitment to the right to return for Palestinian refugees who was displaced due to the Nakba during the creation of Israel in 1948.

The day marks the anniversary of the killing of six protesters in 1976. On March 30 that year, large-scale demonstrations were carried out by Palestinians across historic Palestine against the Israeli government’s plan to expropriate thousands of dunums of Arab-owned land near the sea of Galilee (Lake Tiberias). Many were wounded in the protests as well.

Palestinian resistance movement Hamas issued a statement on the occasion saying, “our people commemorate a group of righteous martyrs who died in defense of their land in the Galilee, the Triangle and the Negev on this day in 1976” and it will remain “a prominent stage for Palestinian people to drive meanings of national unity, steadfastness and resistance.”

Mustafa al-Barghouti, secretary general of the Palestinian National Initiative, told al-Mayadeen that “land day represents the wonderful unity and struggle of Palestinians, asserting that the Israeli security authorities have terribly and repeatedly failed” to subdue their resistance.

Maher Mezhar of the Popular Front for the Liberation of Palestine (PFLP) told Al-Jazeera on the occasion that the day is part of the “wider phenomenon of Palestinians, both inside Israel and in the occupied West Bank and Gaza reaffirming their national identity.”

On Wednesday, a march was also organized across the town of Sakhnin and Deir Hanna, the direct targets of Israeli land grab in 1976.

The marchers on Wednesday paid homage to the martyrs who died there. Citing examples of illegal settlements and the so-called afforestation in al-Naqab (Negev), the protesters highlighted that Israel continues to grab Arab land even now.

Across Latin America, activists have prepared to commemorate "Palestine Land Day" with talks, meetings, cultural activities, media interviews and social media campaigns. The Palestinian flag has been raised and people have chanted their support on the streets. #PalestineLandDay pic.twitter.com/uUJHOfAX5A

Palestinians in Gaza organized weekly Great March of Return demonstrations commencing on the Land Day in 2018 that went on for nearly two years. On each Friday, thousands of Palestinians would gather near the borders with Israel and try to cross the border. Israel used brutal force against the protesters. At least 260 Palestinians were killed and around 13,000 were injured during the protests.

Most Palestinians living in the occupied territories of Gaza, West Bank and East Jerusalem are refugees or the descendants of refugees who fled their villages inside present day Israel. They have been struggling to win the right to return to their lands and relatives.

This year’s Land Day comes amid increased Israeli attempts to grab Palestinian land in the occupied territories, like in East Jerusalem where hundreds of residents of the Sheikh Jarrah neighborhood are facing intimidation and legal pressures to vacate their homes to give way for illegal Israeli settlements. Palestinians in the Negev (al-Naqab) desert are also facing displacement. Israel has used the ploy of environmental concerns to force them out of their homes and is planting trees in the region.