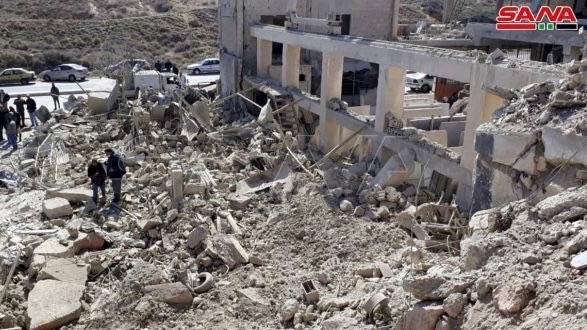 On Thursday, April 14, Israeli warplanes carried out yet another unprovoked attack inside Syria in the western countryside of the capital Damascus. According to Syrian Arab News Agency (SANA), the airstrike did not cause much damage on the ground as the Israeli jets were chased away by the Syrian air defense.

According to Times of Israel, some residents of northern Israel filmed the jets flying towards Syria around midnight on Thursday. This was the second such Israeli attack inside Syria within a week and the eighth in 2022 . On April 9, Israeli jets had fired missiles at Masyaf near Hama city using Lebanese air space.

The Israeli media reported that the strike targeted the Syrian Scientific Studies and Research Center, also known as CERS, located in Hama.

Israel has been carrying out regular air strikes inside Syria since the beginning of the war in the country in 2011, in complete violation of international laws as well as Lebanese and Syrian sovereignty. It has carried out hundreds of such attacks, often killing innocent civilians and causing massive damage to civilian infrastructure inside war-ravaged Syria.

Several people took to Twitter following reports of the Israeli strikes, pointing out the lack of public outrage over the violation of Syrian sovereignty and comparing it to the war in Ukraine. Many observers noted this as a sign of Western hypocrisy.

Bombing Ukraine is bad, but bombing Syria is fine. https://t.co/Adj9cWk1BH

Israel as a policy does not acknowledge most of these attacks. On the rare occasion that it does, it claims to be attacking Iranian and Hezbollah bases in Syria in self-defense. Both Syria and Iran have refuted the Israeli claims of self-defense. According to the Syrian government, Israeli aggression is a way to help the rebel forces in the country to prolong the war and the suffering of the Syrian people.

Despite Syria and Lebanon filing several complaints in the United Nation Security Council (UNSC) against Israel for breaching the UN charter by violating their sovereignty, the UNSC has failed to even discuss the matter or take any action.