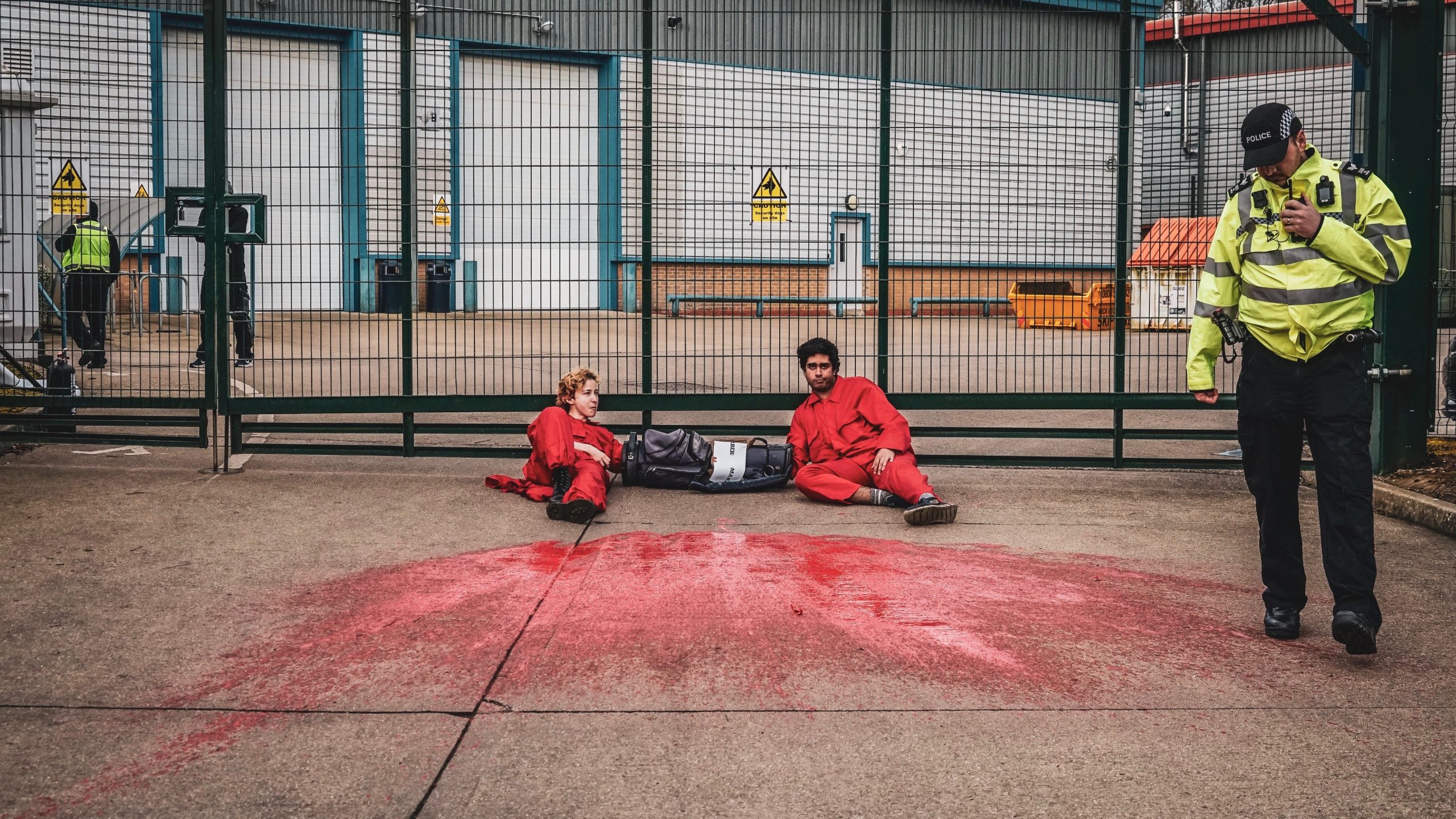 The direct action saw two activists arriving at the site early in the morning and attaching themselves to the factory gates by fixing themselves to a body ‘lock-on’. This resulted in the site becoming inaccessible to employees and halted production completely for several hours. Local news reports quoting police statements stated that the two activists were finally cut free at around midday.

The two activists reportedly carried with themselves placards which read ‘Free Palestine’. They also poured red paint symbolizing blood on the ground in front of the factory gates as part of their direct action. The police after arrival erected a giant screen to block the activists from public view while trying to convince them to end their demonstration. Subsequently, the two activists were arrested by the police. Another activist who was present at the site but was only carrying placards was also arrested without cause. Palestine Action called the police response against them ‘disproportionate’. A statement from the group said that “the police arrived on site in droves with at least seven cars, two vans and one drone.” The police later confirmed that the third activist was ‘de-arrested’. The two other activists were released in the evening, according to the group.

Palestine Action stated that UAV tactical systems, an Elbit Systems subsidiary, is a leading manufacturer of Israeli military drones used extensively to attack or carry out surveillance operations against Palestinians in the occupied territories of West Bank, East Jerusalem and Gaza. The Hermes drone, manufactured at the Leicester factory, is among the many deadly, advanced drones made by Elbit Systems that are supplied to the Israeli military. Palestine Action noted that the Israeli military sources 85% of its drones from Elbit, making it Israel’s biggest arms manufacturer.

According to the group, the Hermes 450 drone, used widely in the Israeli invasions of Gaza in 2014 and 2021 and spotted by its activists in May 2021 during the course of a direct action in which they occupied the factory roof, was also the inspiration behind the watchkeeper drone which has been bought by the UK, the US and several other countries in Asia, Africa and Latin America. All of Elbit drones are reportedly ‘battle-tested’ on Palestinians under Israeli occupation, a fact the company touts while advertising its drones to foreign customers at weapons expos and other military sales events.

Palestine Action vowed to increase the frequency and intensity of its direct actions against the company across the UK. It said in a statement, “as promised, this year Palestine Action have accelerated the campaign to Shut Elbit Down with evermore frequent direct action. Leicester is a prime example of the growing support across the country for an end to Elbit’s business in Britain. Hundreds have turned up to protest the site’s operation and twice-weekly protests are ran outside the site. The tide is turning on Elbit, whose days are numbered when faced with community organizing and direct action.”

The group has already targeted two of the company’s sites in the last few weeks in its direct action campaigns. On Tuesday, April 12, four activists used a body ‘lock-on’ on a cylinder tube they were tied to and blocked the entrance to the company’s headquarters. The activists also covered the exterior of the building with red paint to represent the Palestinian blood “spilled by Elbit’s business”. On March 28, activists tied themselves up to a van outside the same Leicester factory. Some of them also managed to enter the factory premises and defaced and damaged the site before being arrested by the police.

In the press statement, the group announced a talk in Leicester on April 16 to mobilize more support from the local community towards the ultimate aim of shutting down the factory for good. The talk included speakers like Palestine Action co-founders Huda Ammori and Richard Barnard and Pro-Palestinian activist and rapper Lowkey, who was recently the target of a systematic campaign by pro-Israel groups and activists who were trying to get him banned from global music platform Spotify.