The very laws and government agencies created to protect the people in the United States are increasingly being weaponized against those who are often marginalized in society: people of color, the poor, and the working class. In just the last few months, there have been many incidents of this kind of violent abuse of power.

On July 28, the state of Alabama performed a “botched” execution on Joe Nathan James Jr., who journalists believe may have suffered medical malpractice akin to “torture” for hours before his death. On August 12, around midnight, a police officer threatened to kill a Black pregnant woman during a traffic stop in Florida. On August 18, far-right-wing Governor of Florida Ron DeSantis announced that 20 formerly incarcerated people would be arrested for the crime of voting, as the US severely restricts the right to vote for the tens of millions of former prisoners. Within the same week, three police officers were captured on video brutally beating a homeless man in Arkansas on August 21.

“We’re in a state of genocidal war,” said former political prisoner Jalil Muntaqim to Peoples Dispatch. Muntaqim was and still is a fighter for Black liberation who spent 49 years in prison, which activists claim was due to his political work as a member of the Black Panther Party and the Black Liberation Army. Alongside the label of political prisoner, Muntaqim also identifies himself as a prisoner of war.

The belief shared by many that the US is at war with a subset of its own people is not a fringe idea. “End the War on Black People” is a policy platform of the Movement for Black Lives, a major organization within the Black Lives Matter movement. “Stop the War on Black America” was a popular slogan in several uprisings against police brutality, from the killing of Michael Brown in 2014 to Amir Locke’s murder in 2022.

In recent months alone, there has been enough evidence to support this belief that the US is waging a war against its people.

Who polices the police?

According to the data project Mapping Police Violence, police killed at least 1,144 people in the US in 2021, which is approximately three people per day. Every few weeks there is a police murder that triggers mass outrage, such as the killing of Jayland Walker who was found with more than 60 bullet wounds on his body, or Amir Locke who was killed seconds after waking up, or 15-year-old Brett Rosenau who was burned alive during a botched SWAT-team raid.

Two cases of police brutality have generated outrage most recently. In Florida on August 12, police officer Jason DeSue was driving in his car when he told Ebony Washington, a Black mother who was four months pregnant and driving with her three children, to pull over for speeding. Instead of following instructions immediately, Washington waited until reaching a well-lit area to pull over. “It was dark [and I was] with my kids. I felt uncomfortable. I didn’t want to be able to not have anyone else around,” she said afterward in an interview.

DeSue reacted drastically to Washington’s decision. Body camera footage shows DeSue telling her over loudspeakers, “Pull the vehicle over, or I’ll put you into the ground.” Once Washington did finally pull over, DeSue pulled out his gun. He then handcuffed her roughly despite her pregnancy. DeSue eventually released Washington after giving her a ticket for speeding.

Nino Brown, a longtime activist against police brutality and a fighter for the freedom of political prisoners, said, “That this police officer came at her [Washington] ‘guns blazing’ with his weapon already drawn tells us everything you need to know about how the police treat African Americans in this country: the police operate as a Gestapo force in our communities—they shoot first and ask questions never.”

A video of three Arkansas police officers brutally beating Randall Worcester, taken on August 21, went viral. Despite being the victim of a brutal assault, Worcester was the one charged with “second-degree battery, resisting arrest, refusal to submit, possessing an instrument of crime, criminal trespass, criminal mischief, terroristic threatening and second-degree assault,” according to KARK.

DeSue resigned after drawing scorn for pulling a gun on Washington, and the three officers in Arkansas—Thell Riddle, Levi White, and Zack King—have now been suspended. This is the extent of their accountability thus far, even though some people are demanding criminal charges against the three police officers.

The fact that these officers are facing any punishment at all may be related to the existence of video evidence, which in past cases of police violence, such as in George Floyd’s murder, generated enough outrage to result in police accountability. Without video evidence, police often take charge of the narrative, labeling brutality with insidious neutral terms such as “officer-involved shooting” rather than “police killing.” Before the video of Floyd’s murder was released to the world, the Minneapolis Police Department press release of May 26, 2020 read, “Man Dies After Medical Incident During Police Interaction.”

Persecution of prisoners follows them to the grave

There is an untenable double standard of justice for police officers who act with legalized impunity and those they ostensibly protect and serve. Although police rarely face criminal charges for brutality, people who are convicted of a crime, many of whom are racially marginalized and are in deep poverty, are punished mercilessly by the state.

Such is the case for prisoners who face the death penalty, which in the US is most commonly carried out by administering a lethal injection. Although this method appears to be humane, death by lethal injection has been increasingly proven to be a torturous process. As the death penalty comes under more scrutiny, major pharmaceutical companies such as Pfizer are banning the use of their drugs in lethal injections. As a result, states such as Alabama are turning to lower-quality medications, like midazolam, which according to Robert Dunham, executive director of the nonprofit Death Penalty Information Center, “is not an appropriate drug to be used for execution purposes.” As Dunham told the Independent, “Studies now show this three-drug process [of lethal injection] is the equivalent to waterboarding, suffocation and being chemically burned at the stake.”

Even beyond the pain and suffering caused by the contents of the lethal injection, corrections departments have botched executions. Journalist Elizabeth Bruenig wrote in The Atlantic about how after prisoner Joe Nathan James Jr. was executed using lethal injection, an autopsy revealed that the Alabama Department of Corrections took hours to find an entry point for the injection, torturing James in the process. “My initial impression of James was of someone whose hands and wrists had been burst by needles, in every place one can bend or flex,” Bruenig wrote.

Meanwhile, many of those who were incarcerated at one point may find that their state-sanctioned punishments are not over yet. This was the case for the 20 people, all formerly incarcerated, who were recently arrested in Florida for so-called voter fraud. As NPR reported, however, “According to court documents, though, some of the 20 individuals told law enforcement officials that they thought they were able to vote when they cast ballots.” (In Florida, voting rights were recently restored to felons except those convicted of murder or a sexual offense cannot vote—the latter point cited by Governor DeSantis in response to criticism of the recent disenfranchisement crackdown.) Desmond Meade, president of the Florida Rights Restoration Coalition, told Democracy Now that Floridians “are now being dragged from their homes in handcuffs because all they ever wanted to do was participate in democracy.” Florida Governor Ron DeSantis bragged about the arrests, stating, “Today’s [August 18] actions send a clear signal to those who are thinking about ballot harvesting or fraudulently voting. If you commit an elections crime, you will be prosecuted to the fullest extent of the law.”

DeSantis’ words are telling. The so-called “elections crimes” will be “prosecuted to the fullest extent of the law,” and yet there is still no word about criminal charges against officers Jason DeSue, Thell Riddle, Levi White, and Zack King for the violent crimes of assault and battery they committed. Meanwhile, despite “cruel and unusual punishment” being prohibited as per the Eighth Amendment to the US Constitution, prisoners are enduring torturous executions.

Some argue that torture, execution, imprisonment, and brutality against racially marginalized, poor, and working-class people amounts to war. Some, like Muntaqim, have worked to hold the entire US state accountable for genocide, and have sought to question the legitimacy of the laws and agencies governing the people in the United States. Muntaqim said, “It’s important for us to recognize that we, Black people in this country, must seek out other means of survival. Other means of prosperity. Other means from which we can govern ourselves.”

Natalia Marques is a writer at Peoples Dispatch, an organizer, and a graphic designer based in New York City.

This article was produced in partnership by Peoples Dispatch and Globetrotter. 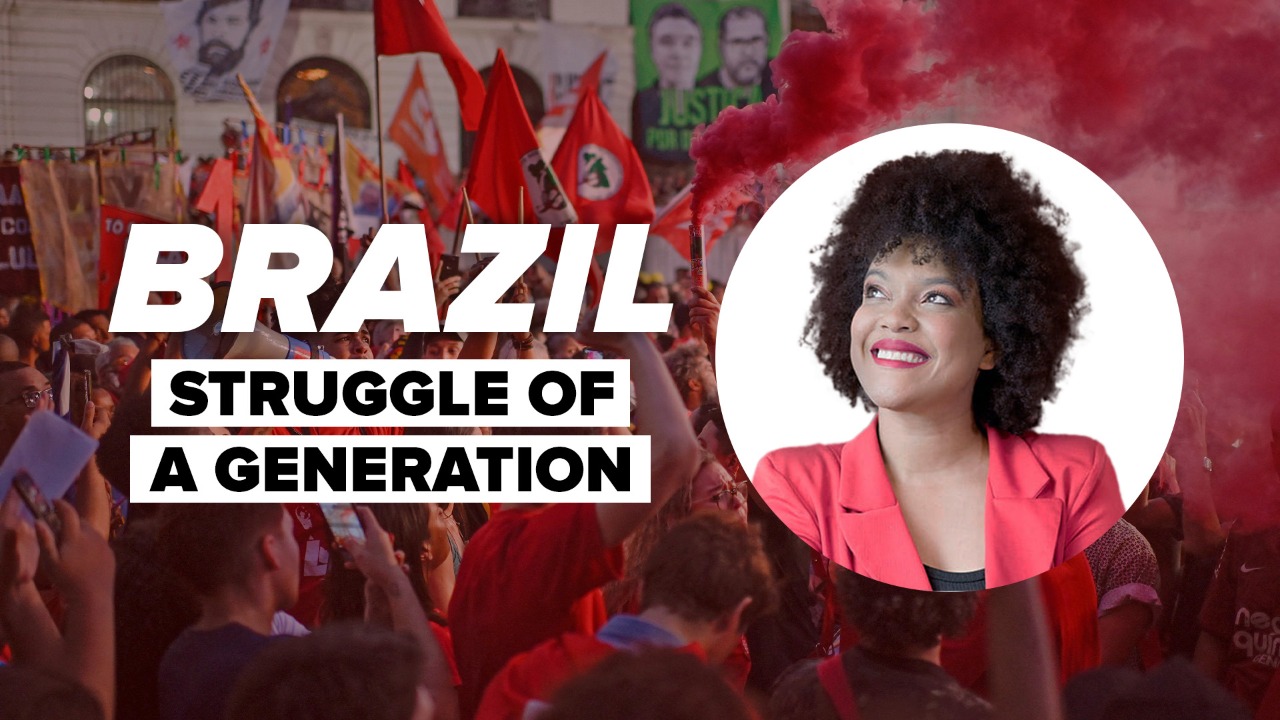