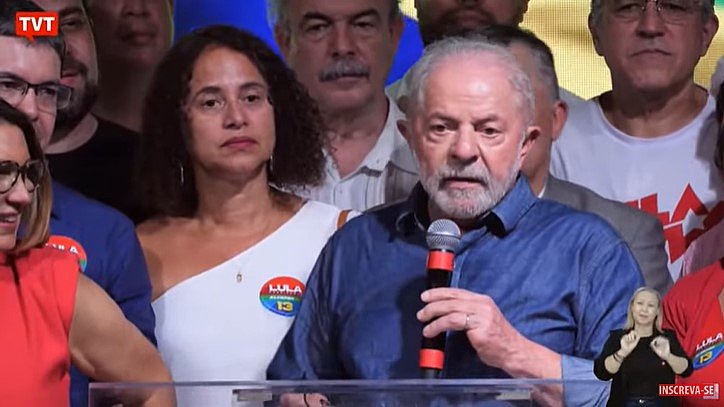 Lula speaking in São Paulo after his victory was confirmed.

President-elect Luiz Inácio Lula da Silva of the Workers’ Party of Brazil addressed supporters in São Paulo after his victory was confirmed on October 30. In the speech, Lula defined the priorities of his future government, called on the Brazilian people to overcome divisions, and rebuild the country around a clear priority: the arduous struggle against economic and social misery.

“Our fight does not begin and does not end with the election. Our struggle for a fair country, in which all Brazilians can work, study, eat, will be [our struggle] for the rest of our lives,” he said. “Brazil is my cause, the people are my cause, and fighting misery is the cause I will defend until the end of my life.”

Lula began his speech by thanking the support he received in the second round, citing in particular Senators Simone Tebet (MDB-MS) and Eliziane Gama (Citizenship-MA). He also thanked his vice-president, Geraldo Alckmin, whom he called a “great companion”, and Fernando Haddad, defeated candidate for the government of São Paulo and former minister of education: “great partner, who ran an extraordinary campaign”.

“All my life I have always thought that God was very generous with me, for having left where I was and getting to where I got to. Especially at this moment when we are not facing one man, one candidate. We faced the machine of the Brazilian State, put at the service of the candidate for reelection, to try to prevent us from winning the elections,” said Lula.

“I consider myself a citizen that had a process of resurrection in Brazilian politics. Because they tried to bury me alive, and I am here to govern this country in a very difficult situation, but I am sure that, with the help of the people, we will find a way out so that this country can live harmoniously, and we can reestablish peace among families, [and] those who think differently.”

Again referring to the need for peace, Lula affirmed that the great winner of the elections was the Brazilian people. “It is the victory of an immense democratic movement that was formed above political parties, personal interests, ideologies, so that democracy would emerge victorious.”

Lula then qualified this democracy: “the Brazilian people want to live well, eat well, [and] have a good home. A job, with a fair salary always readjusted above inflation, and quality public policies. The Brazilian people want to have hope again. This is how I understand democracy. Not just as a beautiful word written in law, but as something tangible that we can build day by day. During the campaign, we made a promise to this real, concrete democracy. And we will seek to build it every day of our government.”

Lula stated that the economy needs to return to “functioning as an instrument to improve the lives of all, and not to perpetuate inequalities.” To this end, he cited support for family farming and micro and small entrepreneurs, in addition to actions to combat gender and race inequalities.

“Only in this way will we be able to build a country for all, with equal rights, whose priority is those who are most in need,” he said. “Our most urgent commitment is to end hunger again,” he assured.

Once again emphasizing the need to pacify the country, Lula united the ideas of fighting inequality and of uniting the Brazilian people.

“There are not two Brazils. We are a single country, a single people, a great nation. It is of no interest to anyone to live in a family where discord reigns. It is time to bring families back together, to remake the ties broken by the criminal spread of hate. No one is interested in living in a divided country,” he defended.

“Brazil can no longer live with this immense bottomless pit, this wall of concrete and inequality that separates Brazil into unequal parts that do not recognize each other. This country needs to recognize itself, to find itself again.”