On January 18, public sector nurses held a speakout and march on New York City Health + Hospitals (NYC H+H) headquarters to demand a fair contract with fair wages and health equity for patients at public hospitals. This action was called by the New York State Nurses Association (NYSNA), the largest nurse’s union in New York State which led the successful strike of over 7,000 private sector nurses earlier this month. Regarding this latest action, NYSNA wrote, “With a contract expiring on March 2, 2023, NYC H+H/Mayorals nurses are demanding that the City negotiate a fair contract with pay equity for nurses and health equity for patients and communities.”

NYC H+H is the largest public health system in the United States, and cares for over one million patients each year regardless of their ability to pay, contrasting with the highly privatized healthcare system in the US as a whole. Approximately 475,000 uninsured patients are treated each year, addressing a crucial care gap.

According to the 2020 US Census, 28 million did not have health insurance at any point in 2020. 91.4% of the US population had health insurance for all or part of 2020 (although it is important to note that an estimated 27 million workers and dependents lost their insurance as of May 2020 during the massive increase in unemployment due to the pandemic). Of this 91.4%, 66.5% had private health insurance, through their employment or purchased independently. Public options, such as Medicare and Medicaid which are meant to serve the elderly and low-income respectively, have strict requirements which many working people cannot meet. These programs are also often deliberately underfunded. While New York City has its own public health insurance plan, serving 700,000 New Yorkers, undocumented migrants are not eligible for this plan, nor the majority of other public healthcare plans throughout the country.

Despite having the important task of serving the most vulnerable of New Yorkers, nurses are saying that the NYC H+H system is understaffed, underserved, and under-resourced. According to NYSNA, the pay gap between private and public sector nurses will soon grow to over $19,500/year. This massive pay gap also contributes to short-staffing as public sector nurses often leave for higher wages in the private sector. This process exacerbates inequities in treatment and quality for patients who rely on public care. During the height of the COVID-19 pandemic, Elmhurst Hospital in Queens, part of the NYC H+H system, was the epicenter of the city’s COVID crisis in March 2020. Images of the refrigerated trucks stationed outside the hospital to hold the bodies of the dead circulated on TV channels and social media globally.

On January 13, after only three days of striking, NYC private-sector nurses won historic agreements with hospitals, raising wages approximately 19%, protecting healthcare benefits for nurses, and achieving the nurses’ primary demand: enforcing and improving patient-to-staff ratios. Private hospitals scrambled to address the nurses’ demands as the strike of thousands of nurses threatened to grind the NYC healthcare system to a halt. “Can this hospital run without us?” asked Montefiore Hospital nurse Judy Sheridan Gonzalez, on January 9, on the picket line outside of the Bronx hospital. A crowd of striking nurses responded with a resounding, “No!”

Due to the Taylor Law, a NYC law that prohibits public employees from striking, public sector nurses cannot legally go on strike, and therefore cannot exercise their collective power as workers in the same way that private-sector nurses can. And yet, nurses at public hospitals continue to fight for the safety of their patients, which are some of the most poor and underserved communities in New York City.

NYC H+H nurse and NYSNA Director at Large Sonia Lawrence, said, “Our public hospitals are the backbone of healthcare in NYC—we got this city through the pandemic— but we are always being asked to do more with less.” NYC mayor Eric Adams recently slashed the budget for public mental healthcare, despite the fact that the pandemic has triggered a 25% rise in anxiety and depression across the globe. “I’m worried about the future, because it seems like we’ll have even less funding and less nurses to care for the most vulnerable New Yorkers—unless the City acts now. Public sector nurses cannot wait months and months to settle a fair contract—we will bleed too many nurses if the City waits to negotiate with us.” 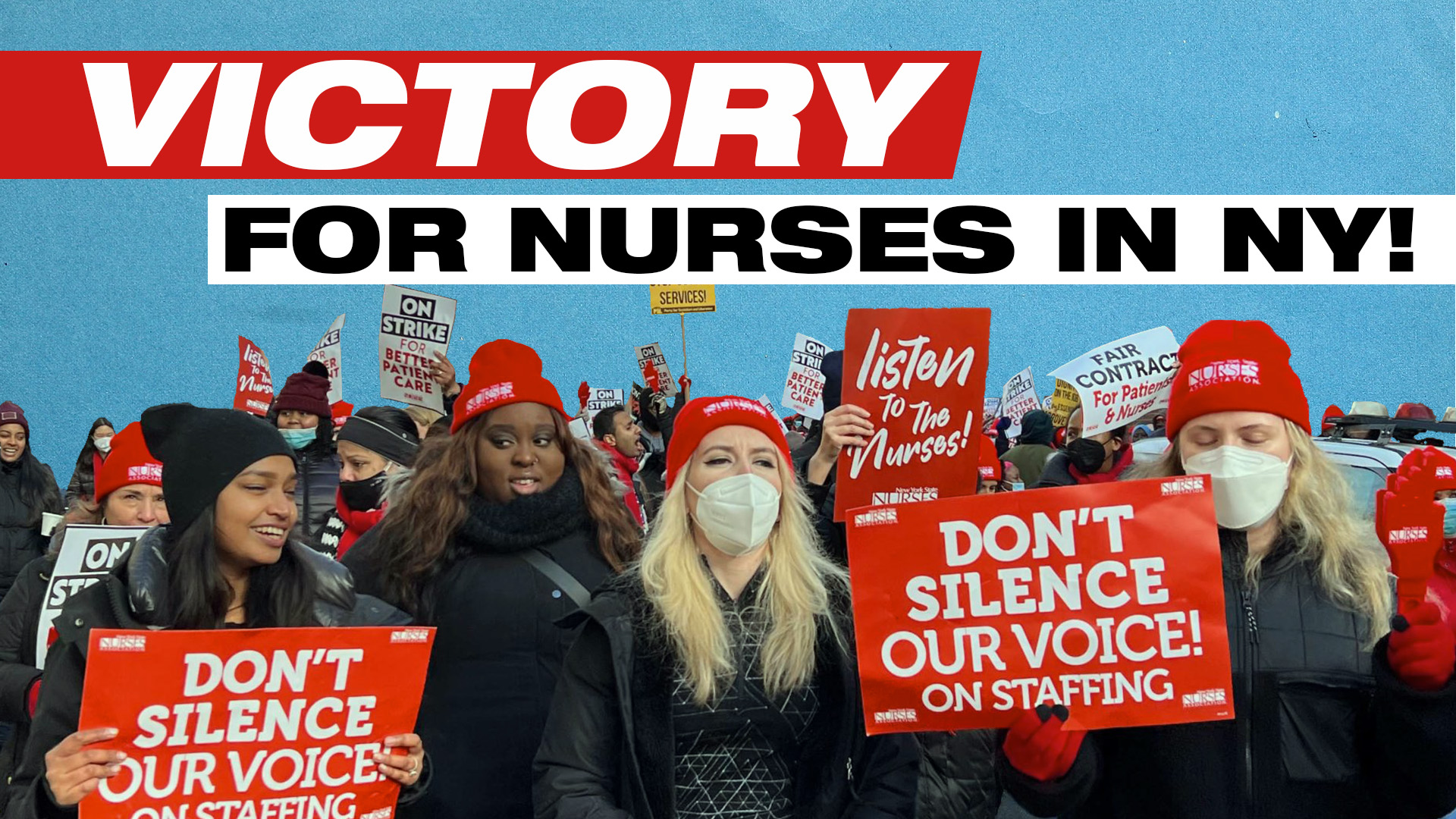