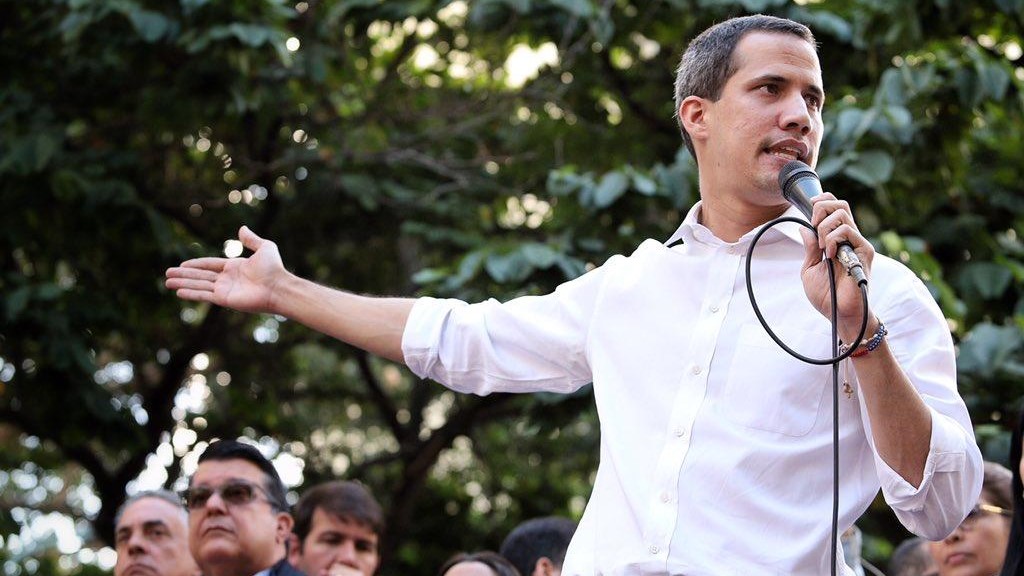 Juan Guiado, the self-proclaimed interim president of Venezuela, for the last one year, has been making constant failed attempts to overthrow the democratically elected president Nicolás Maduro. Photo: Twitter

Far-right Venezuelan opposition leader, Juan Guaidó, declared his intentions to silence the state-owned media outlet, teleSUR on Twitter on January 11. He announced he would take it over and claimed that it “supports terrorists”.

“In the next few days we keep moving forward: tomorrow we will announce the steps to recover the Telesur signal in the continent, and keep an eye on where and when we are going to hold a session of the National Assembly, to open the doors of the (Legislative) Palace and soon those of Miraflores (government office),” tweeted Guaidó.

“Since its creation, Telesur has been used to promote destabilization of the region, support terrorist groups, attack democracy, lie about Venezuela and defend Maduro’s dictatorship,” wrote Guaidó in another tweet.

Earlier that day, during a rally in Caracas, while addressing his supporters, Guaidó had first expressed his intentions and said that he was going to block the channel’s ability to report, claiming that “it lies, seeks inequality, misinformation, promotes terrorist and destabilizing groups.”

In response to Guaidó’s tweets, Colombian journalist and teleSUR’s president, Patricia Villegas Marin tweeted: “Threats on social networks to a media outlet, curiously enough by those who brag about defending freedom of expression. Journalists, trade unions, institutions, states, take note of this. TeleSURtv will continue with its work, which is widely recognized worldwide.”

Telesur is a left-wing Latin American television and online news network with its headquarters in Caracas, Venezuela. It was founded in 2005, under the leadership of Commander Hugo Chávez, with the collaboration of the governments of Uruguay, Nicaragua, Cuba and Bolivia, to build an alternative to corporate media narratives.

Guaidó’s threat came days after he lost his position as the president of the National Assembly. On January 5, as per the Venezuelan Constitution, the National Assembly (AN) held the annual elections to select a new governing board. With the votes of 81 of the 150 legislators, Luis Parra of the center party Justice First (PJ) was elected as the new president of the Venezuelan parliament for the period of 2020-2021. However, Guaidó and his supporters rejected these results and installed a “parallel parliament” in the office of opposition newspaper El Nacional.

Guaidó alleged that the elections were fraudulent because the necessary quorum was not reached and he was supposedly barred from entering parliament by security forces. In contrast to his claims, teleSUR, among other media outlets, reported the reality of the incident and showed how at first he decided not to enter the headquarters because the group of deputies he was with were not allowed to do so. He later set up a show by trying to climb a fence to enter the headquarters and claiming that he had been prevented. Following the incident, Guaidó has intensified his attacks against the government and teleSUR.

In April 2019, when Guaidó had carried out a failed military coup against Maduro, with a small faction of defectors from Venezuelan Security Forces, claiming the start of military uprising, teleSUR was the first media that did on the ground reporting and revealed the baselessness of the claims.

Guaidó had published a video on Twitter, in which he claimed that he had occupied the air base and was supported by a large faction of the armed forces. However, shortly after the video was published, a teleSUR journalist reported live from the air base, showing that there was no occupation of the air base and that the mobilization of right-wing forces was occurring on the Altamira distributor highway near the base.

Despite the numerous attacks by the country’s far-right opposition, the people of Venezuela and its military have continued to support President Maduro and the Bolivarian revolution.