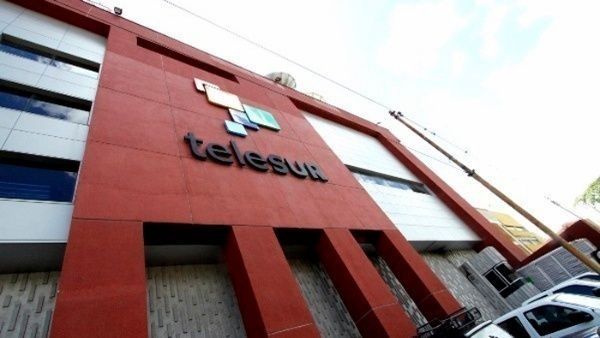 Telesur was founded in 2005 in a collaborative effort between Venezuela, Uruguay, Nicaragua, Cuba and Bolivia, as an alternative to mainstream media narratives. Photo: teleSUR

In a tweet, Guaidó said that he would soon start “the process of reorganizing and rescue of Telesur to put it at the service of truth.” “Since its creation, Telesur has been used to promote destabilization of the region, support terrorist groups, attack democracy, lie about Venezuela and defend (President Nicolás) Maduro’s dictatorship,” wrote Guaidó in another tweet.

Following Guaidó’s intimidating remarks on Twitter, political leaders, journalists, social organizations and citizens from across Latin America and the Caribbean expressed their support for teleSUR and strongly condemned the threats against the people’s media organization.

On January 13, Cuban President Miguel Diaz-Canel strongly rejected Guaidó’s attacks against the socialist media outlet. “We strongly reject threats against the voice and image of the people who fight and resist the imperialist onslaught. From Our America and the world: long live teleSUR,” tweeted the president.

Ousted Bolivian President Evo Morales, who is presently living in exile in Argentina, also denounced the attack. “The Venezuelan coup plotters now announce to steal the teleSURtv signal, the voice of the humble Latin American and Caribbean people. They want to impose a single voice on the world, that speaks only on their behalf and for them, they want to erase the memory of struggle and history. They won’t be able to,” Morales tweeted on January 13.

President of Venezuelan National Constituent Assembly, Diosdado Cabello, tweeted on January 13 that “since its creation, Telesur has become the obligatory reference of informative balance of what happens in Latin America, those who have never built anything, today want to destroy it, they have not and they will not be able to, because a great man Hugo Chávez founded it. We will win!”

Former Ecuadorian President Rafael Correa also expressed his solidarity with teleSUR. “All our solidarity with Telesur, one of the few television channels that still represent our people and their reality,” wrote Correa on Twitter.

Argentinian journalist and the director of Resumen Latinoamericano, Carlos Aznarez, wrote an article speaking about the importance of defending Telesur. Aznarez wrote that Telesur is “one of the few television channels in the world (and the only one in Latin America) that tells things as they are, that offers the mic to those at the grassroots level, to those who fight to be heard, to those, who with a lot of effort, try to continue believing that humanity is not what Trump and his henchmen portray day by day. Telesur has become an essential tool in the information field, and that is why it must be celebrated and defended.”

Marco Teruggi, a sociologist and an Argentinian correspondent in Venezuela for Telesur, Página 12 and Sputnik, criticized the attack against Telesur. “Why threaten Telesur? Because Telesur covered the uprising in Ecuador, the coup in Bolivia, the mobilizations in Chile, Colombia, the permanent coup attempts in Venezuela. Telesur hurts the right-wing and the US,” he tweeted.

Cira Pascual Marquina of Venezuela Analysis expressed her support to teleSUR and also commented that, “We can be grateful that Guaidó said what he said about TeleSUR because basically he makes it clear, crystal clear, what the objectives are of the economic and political sectors that he represents.”

She pointed out, “They [the Venezuelan right] are always talking about freedom of expression, etc. but with this call to close teleSUR, he [Guaidó] is making it clear that he does not want the voices of the peoples of the global south, of the working people of Latin America and elsewhere to be heard because of course the people who fight, the people who struggle, would threaten the regime that he hopes to install which is a regime representing the interests of the old bourgeoisie.”

The opposition leader has also received heavy criticism among his own supporters. Many people have questioned why he is wasting resources on silencing a news network, rather than moving ahead in his coup attempts.

Telesur was founded in 2005, under the leadership of Commander Hugo Chávez, with the collaboration of the governments of Uruguay, Nicaragua, Cuba and Bolivia, to build an alternative to corporate media narratives.