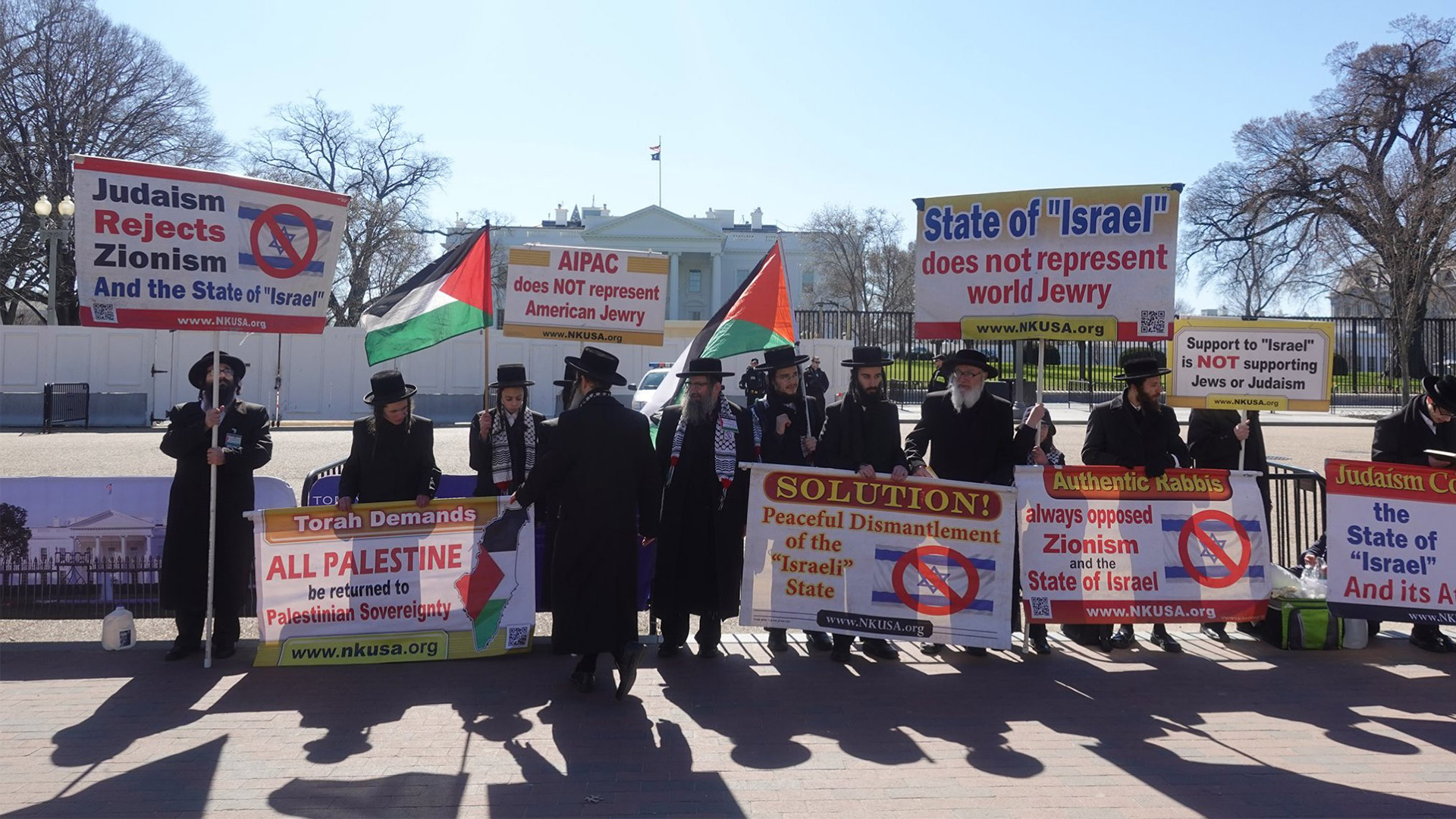 Hundreds of Pro-Palestine activists, Palestinian Americans and anti-Zionist Jews organized a massive protest demonstration in central Washington DC on March 1, Sunday, against the annual conference of the American Israeli Public Affairs Committee’s (AIPAC). The demonstrators marched from the White House to the venue of the AIPAC conference at the Washington Convention Center.

Among the demonstrators included orthodox Jews belonging to the Neturei Karta Jewish sect who were seen waving Palestinian flags and holding banners with slogans such as “Judaism rejects Zionism and the state of Israel”, “state of Israel does not represent world Jewry”, “AIPAC doesn’t represent world Jewry”, “Palestine will be free” on social media posts. There were also reports of clashes between the pro-Palestine and the pro-Israel and pro-AIPAC supporters outside the venue. In one heated exchange a pro-Israel supporter tried to desecrate the Palestinian flag in the hands of a pro-Palestine supporter.

AIPAC, the foremost pro-Israel organization in the United States advocating for strong US-Israel relations, has increasingly emerged as a partisan issue between the Republicans and the Democrats. AIPAC has a close relationship with the extremist right-wing governments of US president Donald Trump and Israeli prime minister Benjamin Netanyahu. The Democrats fear antagonizing the rapidly growing progressive sections within the party and among the American public in general, which strongly disapprove of Israel’s human rights violations and war crimes against the Palestinian people. The annual $3.3 billion in foreign aid provided by the US to Israel, at the expense of American taxpayers, is also a divisive issue.

However, the AIPAC conference was attended by leading Democratic presidential candidates Joe Biden and Mike Bloomberg. US vice president Mike Pence, Secretary of State Mike Pompeo, Senate minority leader Chuck Schumer and US ambassador to Israel David Friedman spoke at the event, along with Israeli prime minister Benjamin Netanyahu and Israeli ambassador to the UN Danny Danon. They all had the single-point agenda of attacking Democratic presidential candidate Bernie Sanders, who himself is Jewish.

Sanders had earlier decided to not speak at the AIPAC conference, saying that it acted as a platform for “leaders who express bigotry and oppose Palestinian rights”. Sanders has consistently stood up for Palestinian human rights and has condemned the violations and crimes committed against Palestinians by the state of Israel. Sanders had also called Netanyahu a right-wing leader and a ‘reactionary racist’. Elizabeth Warren, another Democratic presidential candidate also decided to skip the AIPAC conference this year.

Netanyahu has termed Sanders’ comments as libelous and outrageous, accusing him of trying to break the US-Israel alliance. Danny Danon also attacked Sanders for speaking out against AIPAC and Israel, calling him a liar and an ignorant fool, who was not wanted in AIPAC or Israel. When asked about Danon’s comments, Sanders stood his ground, criticizing Israeli policies and actions towards Palestinians, adding that AIPAC possessed significant financial and political power and influence. Reaffirming his commitment to the freedom and security of Israelis, Sanders said, “I am pro-Israel. I am pro-Palestinian. I want to bring people together to finally achieve peace in that region.”

In a related development, two democratic presidential candidates who had earlier said that they would skip the AIPAC conference, Amy Klobuchar and Pete Buttigieg, went back on their decision and will now be sending pre-recorded video messages to the conference. Reacting to the news, Jewish human rights and advocacy group IfNotNow said that it was “disappointed by Amy Klobuchar’s and Pete Buttigieg’s decisions to cave to AIPAC’s pressure, but also unsurprised, given that their campaigns have been distinguished by a stated desire to be seen as progressive alongside a demonstrated refusal to stand up to the corrupt establishment.” Both of them have since dropped out of the presidential race and have endorsed former vice-president Joe Biden.